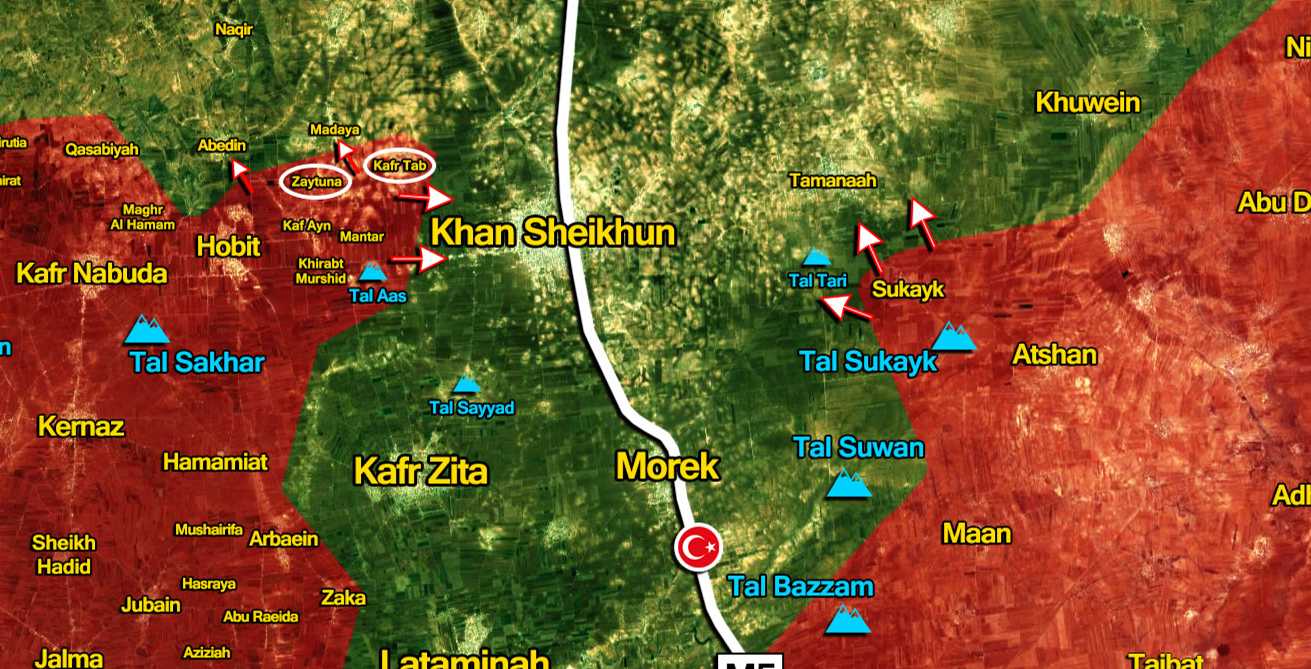 [ Editor’s Note: As you can see from the detail map above, the SAA with Russian/Syrian air support, is executing a methodical dual flanking attack on Khan Shaykhun, the city famous for its fake gas attack which VT busted.

Some say the process is too slow; that with air superiority, it should be going much faster. But there is a reason for the slowness, and that is Assad values the lives of his soldiers and keeping morale up during this long war by keeping casualties down, especially for his best offensive units like the Tiger Forces.

It is hard to recruit replacements into such units, when their life span can be measured in months. Assad also has to be sure that he has well-trained, experienced combat veterans, in case he has to defend against a joint US coalition and Israeli major attack, after the suitable false flag attack was deployed to justify it.

The Russians are also continuing to get vast experience in combined operations, coordinating real time Intel into target selection, so one is not bombing where they were, but while the enemy is in the target area.

This current flanking move to the east and west of Khan Shaykhun is designed to pressure the jihadis to pull out of Southern Idlib while they can still retreat in good order, bringing their weapons and equipment with them.

The SAA would also love to induce a panic that would put all the retreating jihadis on the one main road north, where air attacks can deal with them. The missing ingredient in all this, which I see no media covering, is the conspicuous absence of the Russian combat helicopters.

I can only surmise that Moscow was losing too many and did not think the damage they were inflicting was worth it, a difficult admission if that is the case, when using their state of the art combat choppers. But when aircraft losses are zero, that is the go to medium to use.

A key part of the Russian support for Syria, is to keep the cost, material losses and casualties low. It does not want to have a Vietnam or Afghanistan US-type experience there.

But the saddest thing of all is Russia’s complete stand down to challenge Erdogan directly for his supporting the jihadis in this long, tormented struggle in Idlib. Iran also is mum on challenging him for playing both sides of the fence.

Both have other strategic issues with Turkey, and Erdogan is using that to keep them quiet about his planned and operational occupation of Syria using proxy terrorists and Turkish “observers”.

While both denounce the US doing this, they are not doing so in Turkey’s case, surrendering the moral high ground on that issue. They risk losing all they have gained by not being able to pacify the whole country.

When is the last time we have heard of any movement on the Syrian constitutional committee? That effort seems to be dead. Even the UN is silent… Jim W. Dean ]

Following the liberation of Umm Zaytunah and Kafr Tab from Hayat Tahrir al-Sham (formerly Jabhat al-Nusra, the Syrian branch of al-Qaeda) last night, the Syrian Arab Army (SAA) and the Tiger Forces have pushed towards the villages of Abedin and Madaya in southern Idlib.

According  to some sources, SAA units already entered these villages and clashes are ongoing inside them.

Meanwhile, the Russian Aerospace Forces continued their bombing campaign eliminating militants’ infrastructure in the southern part of the Idlib zone. These strikes play an important role limiting militants’ ability to deploy reinforcements, including equipment, to the frontline.