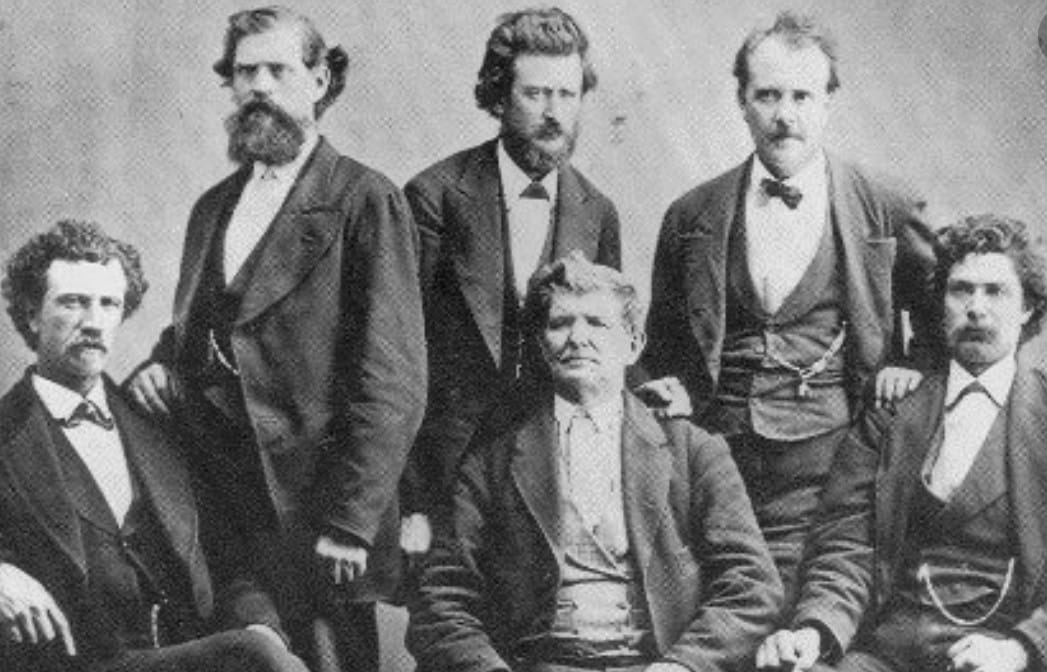 John D. Lee approached with a flag of truce, told the wagon train members that the Mormons were there to protect them from the Indians, and the only way they could do that would be to have all weapons put into a wagon, have small children in another wagon, the women and other children walking in a separate group from the men, and all would be escorted to a safe location. Instead, once they were all disarmed and separated, the Mormons killed them all except for the small children who they believed wouldn’t be able to tell the story — the children were then given to Mormon families to raise. – Meadow Mountains Massacre 1857 [bold added]

Americans are facing something so terrible and unthinkable it seems impossible.

Growing up I was taught first in school and then through my own research the words and history of the founding days of the united States Republic. I learned from the erudite writings of scholars and intellectuals who were also the founders of the American Republic about our system of government, which was designed from the start to limit, severely, the powers of government – while empowering the citizens, the sovereigns, with protected liberties to live without tyranny, authoritarianism and document fiction slavery.

In order to keep governments behind the firewall of the Constitution, the founders envisioned many checks on government powers and also provided last resort options if all else failed.

Today, the first Amendment is being shredded by fictions of language and contract law to circumvent Constitutional Law. New charges are being invented and include penalties for speaking freely.  Hate speech, anti-Semitism, and criminalizing the free speech right to boycott are just a few examples. None of these charges and acts of “law” are Constitutional, they are color of law invented to support the agenda of authoritarians, tyrants and agents of treason.

The Second Amendment is now all that remains, and our enemy is attempting to wrap the Constitutionally protected right to “keep and Bear Arms” in qualifying terms of language and legal deceptions.

The Constitution does not recognize any preemptive forms of “infringement” on the meaning of the second Amendment, but cunning men, enemies of America, its citizens, and its Constitutional government itself, are inventing psychologically devious fabrications to limit, infringe, and ultimately remove your God given right to self protection by qualifying who may be eligible for the right to keep and bear arms.

The goal of destroying the white race is simply so desirable, it boggles the mind trying to understand how anyone could possibly object to it. Those who object to my advice, knowingly or perhaps unknowingly, are themselves white supremacists. Harvard Professor Noel Ignatiev

The recent shootings and the resulting Zionist controlled propaganda media’s endless repetition of racial labels, such as white supremacist, and white nationalist is weaponized language to prevent whites from even speaking about their racial concerns, as this is now associated with supremacism and nationalism. This is tactical psychological warfare for purposes of invalidating any white effort toward white racial preservation, cultural pride and claims of racism against other races or the media – since that immediately defines them as supremacists and nationalist. The media’s hyperbolic outpouring of sensational propaganda against white people, rather than just murderers, is a clear indicator they are working a political racial agenda, which will not end well for whites if they disarm on demand.

One of the many reasons Western governments, under the control of mostly Zionist agendas, MUST take your weapons is because they have looted the wealth of these nations for generations. This looting and the use of the loot to create endless war against the enemies of Israel at the cost of Western Civilization’s sons, daughters, wealth, legacy and Karma has finally created the “crack up boom” that follows the use of debt-based currency (and the financial systems functioning against the currency) – the complete collapse of the currency value, a credit crisis with no solution, and the reduction of the civilization to starving paupers.

92 million plus people are already in a modern form of a bread line getting food and benefits from the various US governments, especially the federal government.  When the collapse finally appears for everyone, the government will go into hiding – the damage and carnage of the looting, wars, indoctrination, corruption, pedophilia, voter fraud, mineral property theft, metals price manipulation, and much more will finally reveal the monster that is now an enemy occupied united States.

I have written a letter to my Congressman and Senators demanding that they stand and vote against the onslaught of the media and “intellectuals” working an operation to destroy the second Amendment.  Please take the time to write your own representatives. If you find my version useful you may use it without credit or just use parts of it as you like.

We do not have much time remaining. Remember your weapons do not make you less safe.

You cannot be made safer when you are made defenseless.  Semiautomatic weapons are the great equalizer. Governments clearly respect semiautomatic’s power to protect or they would not be attempting to steal them away using language and legal deception disguised as law. Look at the sad situation in New Zealand, one totally faked shooting and the citizens are dutifully handing over the means of their self defense.

Axiom: You cannot make a man safer by making him defenseless.

Fact : Rifles of any kind are not involved in any significant number of shootings.

Reality :Blacks commit more than 75% of mass shootings in the United States.

During the 2 weeks before and 1 week after the “shooting” in El Paso, there were at least 42 mass shootings (3 or more people shot) in black communities in cities like Chicago (disarmed), Baltimore (disarmed) , Philadelphia (city is nearly disarmed) and many others.

On Saturday August 3rd, the day of the El Paso shooting, 55 people were shot and 8 murdered in TWO mass shootings in Chicago but the tightly controlled mainstream propaganda media did not mention a word – not a peep about these mass shootings.

The agenda is to disarm, disparage and marginalize white people, with no concern about gun violence or the battle fields of daily mass shootings in war zones liked disarmed Chicago and Baltimore (highest rate of violence in nation), or the millions of people who stop crimes or prevent violence against themselves or others using a weapon each year.

Fact: Guns are used about 6,850 times a day to stop or defend against criminals by average citizens. See gunowners.org or other crime research organizations for more information.

Please remember that Israel is another nation and the Israeli lobby for disarming Americans is the largest and biggest spenders –  with no other lobby against guns in the same league. Supporting Israel’s attempt to disarm America is NOT American it is treason.

There are dangerous portends in the massive media defamation of white Americans to “end run” the Constitution with color of law for purposes of violating the second Amendment.

Dr. John Lott has shown in scientific research that Red Flag laws make the weakest class of people the most vulnerable to violence. Further, he has shown that Red Flag laws increase incidences of rape and violent assaults on women. Research and results are available at crimeresearch.org

Revisit American history and take note of gun crime rates in America prior to the changes in the immigration act of 65 and note the increases after the 1968 gun laws.

Importing undocumented, illegal immigrants from incompatible cultures of males, mostly of fighting age, is reason enough the average job holding American must have access to the best possible means of self defense.

It is not a coincidence that the controlled media indoctrinate fear of semi-automatic rifles.

According to FBI statistics, the semi-automatic rifle is involved in an insignificant number shootings each year, yet these weapons are the primary focus of the media circus around suspicious white mass shootings.  The reason is: these weapons are the best weapons against tyrannical governments as well as foreign invaders – these are the weapons of militias, required in times of war or institutionalize corruption leading to attacks on citizens.

No shooting anywhere can be lawfully used to take my weapons.

Weapons of criminals have always been lawfully removed.

Using color of Law to disarm Americans will be seen as a criminal act of treason.

Please vote for America and against any further additions of color of law called “gun control.”

Why they Must Take your Weapons: The Red Terror is Coming To America

The New Zealand Hoax: What’ s Next for European’s