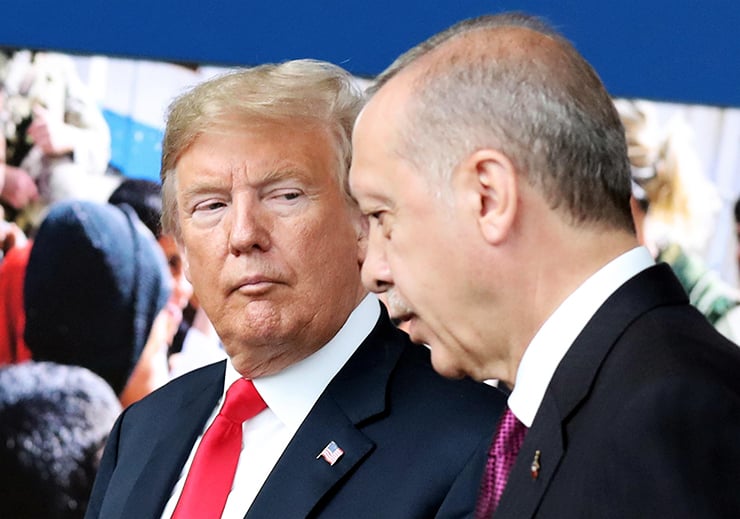 [ Editor’s Note: There is an old saying, “God is in the details”, and that holds true in modern times. The best laid general plans can crumble into dust if there is not solid agreement on how best to pursue stated shared goals.

US-Turkey negotiations had dragged on so long that Turkey was threatening to go it alone and push the Kurds out by itself, so an agreement was made to get some momentum going with the announcement of a joint headquarters, and the rest would be sorted out later.

That is not happening. The depth of the zone is still unresolved. Turkey wants the safe zone cleaned of all Kurds by labeling them terrorists.

This was absurd, as we see Turkey providing vast support to the terrorists in Idlib, which has completely stalemated Syria’s political and peace process without a whimper from the US or anyone but the Syrian government.

The US wants the non-PPK SDF Kurds to stay, as they might refuse to leave and fight otherwise. The US has been pouring weapons and supplies into the SDF to make them more comfortable, which has pissed Erdogan off to no end.

While the US wants the current Kurdish administrations to remain, Turkey wants the Turkmen and Arab majority to run the show. The US knows the SDF Kurds might refuse to leave, as they want all the land they can hold to bargain an autonomy deal with Damascus.

And last, neither the US or Turkey gives a hoot about what the Assad government thinks about any of this – an ongoing breach of Turkey’s promise to respect Syria’s territorial integrity.

That was about as credible as Trump’s claim to pulling out of Syria back in January. This semi-deal could blow up at any time, and I mean the kind with shooting… Jim W. Dean ]

We have all been here before. Turkey has troops lined up on the Syrian northeast border and announced it will proceed alone with its incursion against the Kurds if it does not get cooperation with the US. After three days of negotiations we have a report that an agreement to form a joint command operation center has been agreed upon, but with no details.

This report seems to me like a stall to buy time for either side to bring the other around to its objectives. But can that happen now after so many failures? The new Secretary of Defense Mark Esper, responding to Erdogan’s threat to go it alone said that any Turkish military operation into northern Syria would be “unacceptable”.

And he went further, stating that the United States would block any unilateral incursions, and hence my use of the term “show down” in my title.

Turkey has some skin in the game, as it has experience with major incursions into Syria. It crossed into northwest Syrian in January of 2018 with its own proxy fighters, anti-Assad Syrian Arab rebels as part of the planned dismemberment of Syria, where Turkey wanted to make sure it got a good chunk of the booty. This effort pushed the Kurds out of almost 300 towns.

And yes, there were rumors that some of the Turkish proxy troops were Syrian jihadis and Turkish army troops dressed up as rebels, a long used tactic in the Syrian conflict.

The Kurds have not been silent on the issue, with their General Kobane promising Turkey a “big war” if it proceeds to throw the Kurds out of the proposed 35-kilometer security zone, or Turkish seizure of Syrian territory, depending on how one views that action.

This is not a bluff, as Kobane has had his forces dug in along the anticipated incursion routes and has had time to construct underground tunnels. But he has two problems. The Turks are probably aware of these and can take them under artillery siege while armored infantry goes around them.

With Turkey having air superiority, the Kurds would have problems with getting resupplied and the Kurdish strong points could get “bunker busted” to death with specialized air munitions.

That circles us back to Mr. Esper’s threat. The Kurds could not fight General Kobane’s big war without being supplied by the US, which would mean the US would have to protect those supply columns by committing air cover to protect them, putting one NATO county in conflict with another in air combat which most observers consider unlikely to happen.

There have been reports of major US arms and logistics reinforcements coming in from US bases in Iraq. The latest report on August 6th from the Muraselon website including a video shows a night column of 200 US vehicles moving through the Syrian city of Qamishli near the Turkish border.

And last, poor Syria weighs in with its usual denouncing any incursion into its country by anyone, especially Turkey who has guaranteed Syria’s territorial integrity, or the Trump version of a guarantee, which means “until I change my mind.”

We must not forget that Turkey is one of the Astana-member guarantors of the initial Idlib ceasefire; and its record of double dealing there is carved in stone, having provided logistics support for the jihadis who continue to fight there and holding the Syrian residents as hostages in an open air prison.

This has tied up the SAA in defending a large perimeter, where its enemy can maneuver along interior lines. In the rest of he Syria the SAA has launched no other major clearing campaigns in some time. The Deir Ezzor province appears to have been ceded to the Kurds. with the US backing them up with not only air cover but endless logistics supplies.

The US has been behind much of the interference, the same county that has made a big deal out of alleged Russian interference in the Trump election while holding Syria in a virtual hostage state.

The Idlib jihadis have incurred major casualties, from ground and air assaults, but are still holding firm. This indicates that reinforcements are crossing over the Turkish border, feeding the now stalemated situation, despite the success of the recent SAA assaults in Hama. Erodogan has the blood of many lives on his hands for all this.

The situation reminds me of how Germany and France were guarantors of the Ukraine-Russia agreement, which the Kiev hardliners paid little attention to, as the two pretend guarantors did nothing to make them honor the agreement. Mind you this was before the “break the JCPOA” president Mr. Trump had arrived on the scene.

Turkey is playing a double game here as it has during most of the Syrian War. Remember that this was the country that was buying oil trucked across the desert from ISIS at discounted prices, supplying the operational cash for ISIS. This helped it to expand its operations to the point of launching an offensive on Iraq and all the devastation that ensued from that. With friends like Turkey, who needs enemies.

Turkey’s military PR claims that the buffer zone enables their “Syrian brothers, to be able to return to their country”. That’s a pretty cold statement when Turkey has been the key power enabling the Idlib jihadis to hold that province by the throat and terrorize the people there.

All I can think of is some kind of trade off economically to promise the SDF Kurds that in any future peace settlement the US would back them in keeping the oil and agriculture riches of Deir Ezzor province.

The US may also promise support for the Kurds’ autonomy goals by offering them support to begin taking more of the central Syrian territory on the south side of the Euphrates to add to their future autonomous state, while the SAA is bogged down in endless Idlib combat.

We have come a long way, backwards, from Trump’s announcement at the beginning of the year that he was withdrawing US troops from Syria. I hope someone still remembers that.

One would hope the world would realize by now that the Trump regime’s statement or signature on any deal is just a tactical move subject to change at any time, for any reason. These are very dangerous people.