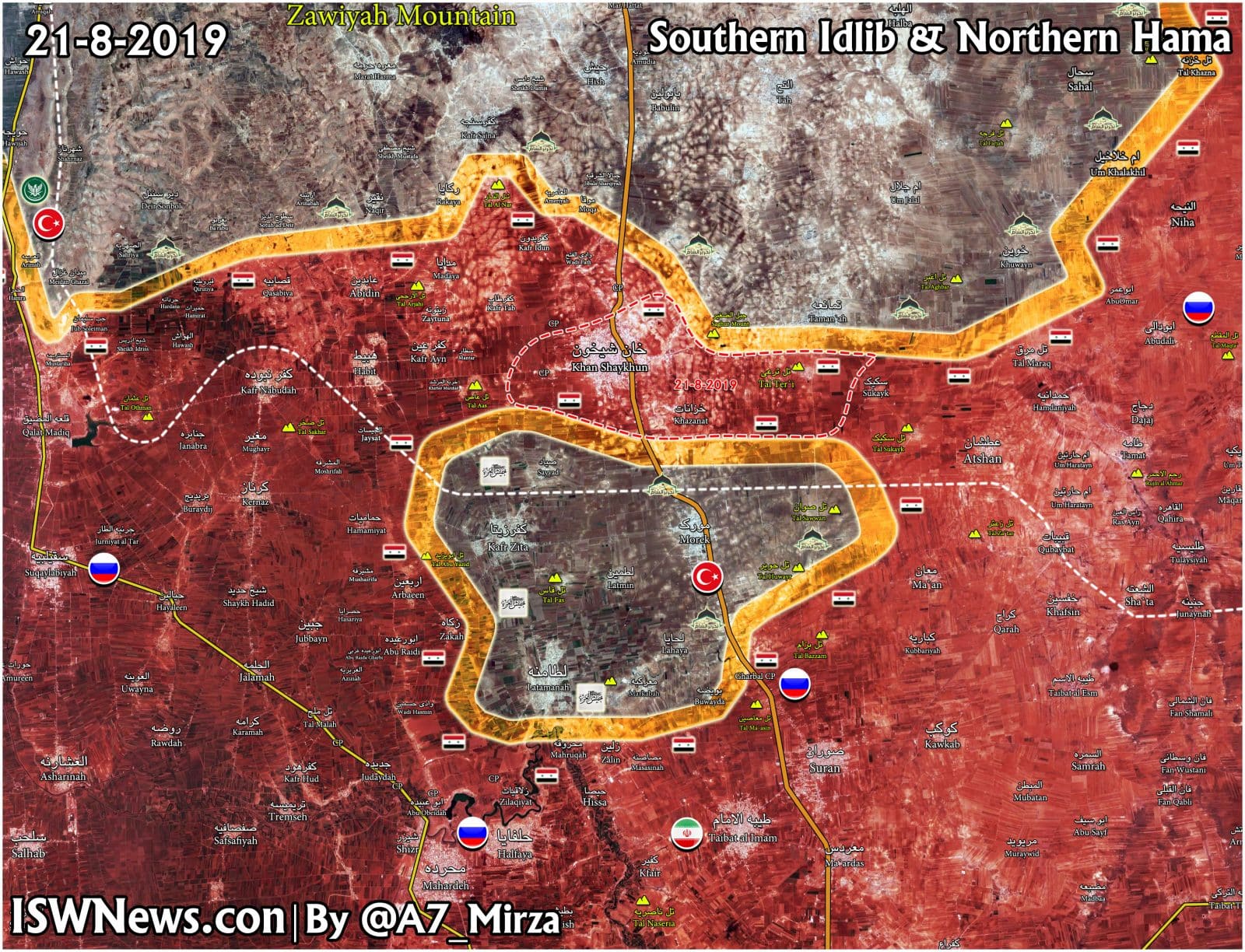 [Update: The Khan Shaykhun pocket is closed and the Jihadis and Turks in the south are surrounded. My note below used a map showing no movement to close the open gap, as that was exactly what the SAA was doing.

The SAA will now get a good bag of prisoners and Intel. And the Turks in Morek could be looking at aiding and abetting terrorism charges for their assistance in helping the jihadis not only old Hama territory but launch offensive operations from it.

[ Editor’s Note: We are not hearing anything in these reports as to what direction the jihadis are fleeing. The SAA left flank shows movement north and south, but nothing west to close the escape route for those jihadis wanting to escape to their own lines.

But I suspect that the last time the SAA wants right now it let the jihadis know where they really are. The open retreat space to the NW could be the valley of death for all we know now.

Nana has confirmed the special ops spear head troops did the tough night time recon and initial engaging of the enemy. They would include a lot of snipers with night scopes. Operational security is really tight. We are getting no photo and video posting to social media.

But we will get to see the official footage eventually, at least some of it anyway as it will be training footage for new Syrian and Russian Special ops units being trained. The Russians have been helping train the new Syrians and they will be confident troops.

It was a quiet day on Turkish news, both from Ankara on Idlib and the Kurdish move is off the front pages now, for a while anyway. If Erdogan proceeds with that move it will only make the SAA fight harder in Idlib to retake their country… Jim W. Dean ]

In a major blow to Hay’at Tahrir al-Sham (HTS) and its allies, the Syrian Arab Army (SAA) has liberated the key town of Khan Shaykhun in southern Idlib.

Khan Shaykhun, one of the biggest urban centers in southern Idlib, was a key stronghold of HTS. The town is located on a highway linking the Syrian capital, Damascus, with Aleppo, the country’s industrial center.

The SAA is now advancing northeast of Khan Shaykhun towards its positions near the newly-captured village of Tar’i. Army units are also storming the town of Murak, south of Khan Shaykhun.

Meanwhile, the fate of the Turkish observation post in northern Hama remains unclear. Initial reports indicate that it may have been besieged by the SAA.