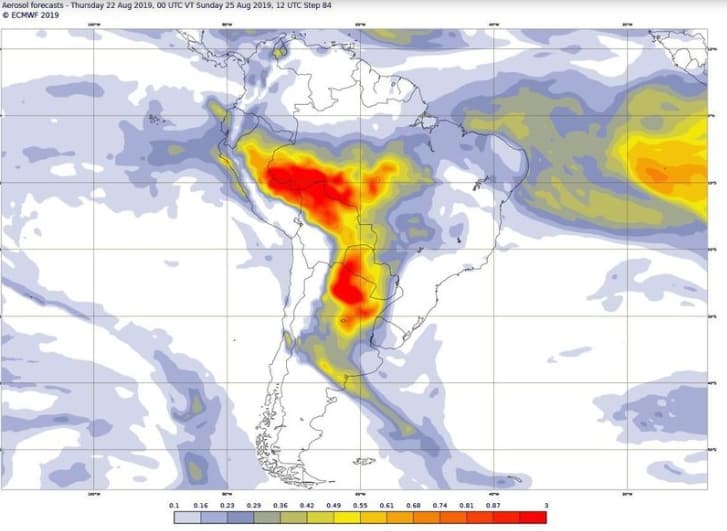 Health Editor’s Note:  This is quite horrific!  With 99 percent of the fires caused by humans, this is yet another sign that humans are the stupidest beings on earth. The  Amazon forest is like the lungs of the earth, riding it of carbon dioxide and producing oxygen.  President Jair Bolsonaro’s pro-business policies are said to be to blame. Does this not sound familiar with Trump and his cronies now making policies that favor oil and slash the powers of the Environmental Protection Agency? ……Carol

Since January, a staggering 74,155 fires have broken out across Brazil, the country’s National Institute for Space Research (INPE) reported Wednesday. This figure—an 85 percent uptick from the same point in 2018—includes more than 9,000 blazes spotted within the past week and represents the highest rate recorded since documentation began in 2013.

Crucially, environmentalists point out, the vast majority of the infernos are not wildfires, but rather intentional land clearing attempts undertaken by farmers and loggers emboldened by Brazilian President Jair Bolsonaro’s pro-business policies. Regardless of origin, the blazes, now large enough to be seen from space, pose a significant threat to the Amazon, which is popularly known as the “lungs” of the planet due to its capacity for storing carbon dioxide and producing oxygen. As Terrence McCoy writes for the Washington Post, the rainforest is “one of the world’s greatest defenses against climate change.”

Why fires are raging on such a large scale

According to McCoy, infernos have razed 7,192 square miles of Brazil’s Amazon region this year to date. Comparatively, Amazonian fires caused roughly half this damage—cutting through 3,168 square miles—over the same period in 2017.