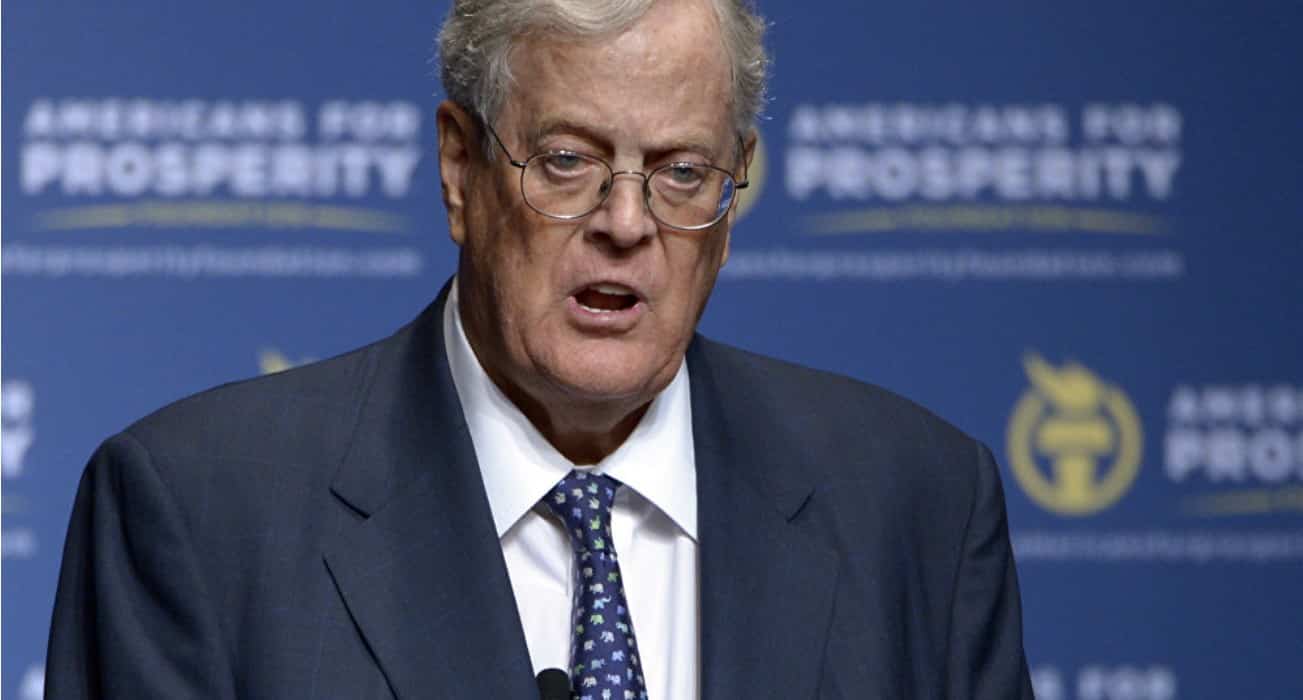 Editor’s note:  The Koch brothers, financiers of fake science, massive research censorship, the world’s biggest polluters whose lives will destroy millions and will eventually turn earth into Mars, are a mixed bag.

Politically, they are monsters, freaks, warmongers, polluters, supporters of the worst of the worst of American politics.  One of them is dead, not much older than me, despite endless billions and teams of doctors no normal human could afford.  This is the luck of the draw.

Then again, the Quincy Institute that combines the Koch fortunes with George Soros, the great enemy of Zionism and Israel’s monstrous abuses, made me rethink whose these men are and now, with one brother, were.

Grotesque?  Hitleresque?  More?  How can an act of humanity so late in life erase decades of decadence and mayhem?  Then again, and we always ask this, did his turnaround get him murdered?  Hey, we’re the press.  We ask the questions.

Sputnik News: Koch is survived by his wife and three children, and by his brothers Frederick, Bill and Charles. Together with Charles, David Koch was known as one of the largest donors in American politics, with the brothers pledging to contribute at least $889 million for the 2016 presidential and congressional elections.

Billionaire conservative icon and lobbyist, anti-Trump activist and former Koch Industriesvice president David Koch has died at the age of 79, his brother confirmed in a statement.

“It is with a heavy heart that I announce the passing of my brother David. Anyone who worked with David surely experienced his giant personality and passion for life,” Charles Koch wrote, saying his brother had fought prostate cancer for 27 years.

Koch stepped down from his post at Koch Industries last year due to health concerns, and left his posts at many other Koch initiatives, including the Americans for Prosperity Foundation, a conservative political advocacy group opposed to global warming regulations, the expansion of Medicaid, the extension of union bargaining rights, and the raising of the US federal minimum wage.

“David liked to say that a combination of brilliant doctors, state-of-the-art medications and his own stubbornness kept the cancer at bay,” Charles’ statement continued. “We can all be grateful that it did, because he was able to touch so many more lives as a result,” it said.

Koch, recently ranked by Forbes as the 11th richest person in the world, with a total net worth of an estimated $42.4 billion, was also known for his philanthropy in the arts, donating $100 million to renovate the New York State Theatre for ballet, modern and other forms of dance, which was renamed the David H. Koch Theatre in 2008. Koch also contributed to a number of Republican and libertarian-leaning think tanks and educational institutions, including the Ayn Rand Institute and the Washington-based Cato Institute, which he co-founded.

Koch ran in the 1980 US presidential election as the vice-presidential candidate for the Libertarian Party, and became co-owner of Koch Industries in 1983 together with his brother Charles. Based in Wichita, Kansas, Koch Industries is engaged in a number of ventures, including oil and gas, chemicals, fertilisers, plastics and finance, and is currently the second-largest private firm in US in terms of total revenue, which exceeded $110 billion in 2018.

Last month, US media reported that the Koch brothers had teamed up with Hungarian-born US financier George Soros to create a new foreign policy think tank, known as the Quincy Institute, aimed at ending the US’s “endless wars” abroad, with the think tank expected to have a budget of $3.5 million by 2020 and to publish policy expert analyses which could be used by Congress and in public debates.