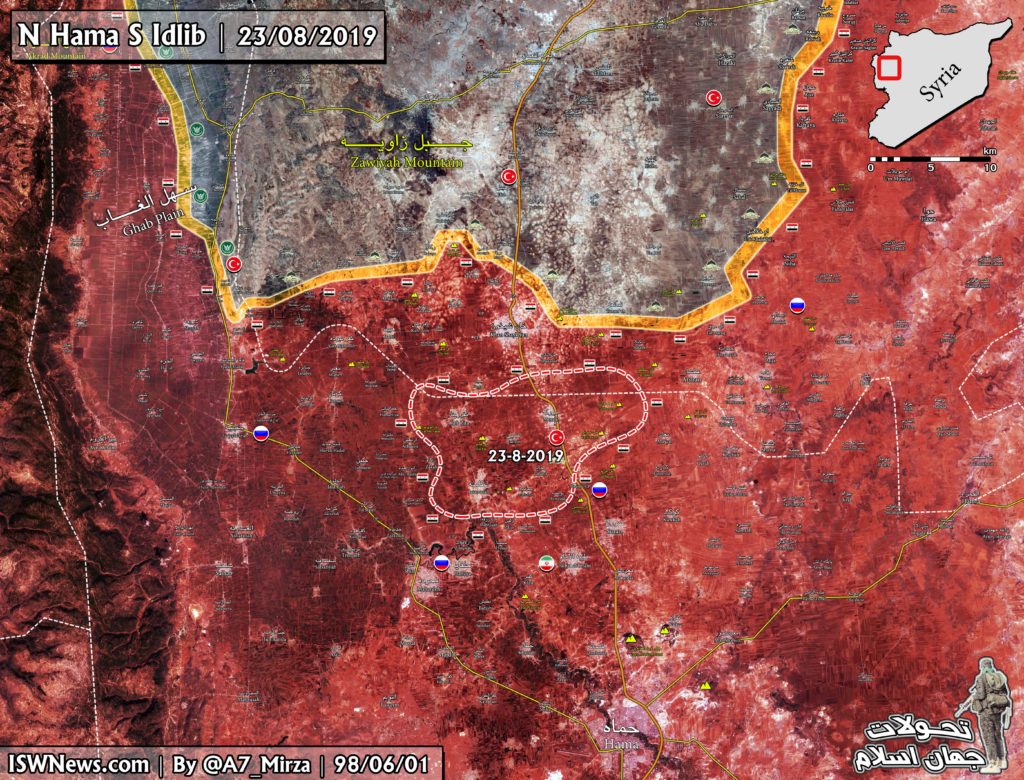 [ Editor’s Note: This was anticipated news of course. Some of the footage below is not current, as I have seen it from the past few days. Southfront is trying to keep the story going by recycling, especially if they were behind on their monthly fundraising goal, but it is summertime, when readership is always lower.

This campaign had more of a news blackout than we are accustomed to seeing. Some of it was for operational security and to keep the jihadis guessing about where the SAA’s main advance and next attack was going to be.

The jihadis had the advantage of interior lines of movement, but also the major disadvantage of getting bombed on the roads and in any stationary positions they remained in too long.

It appears that the “golden bridge” (from Sun Tzu’s writings) was left open to allow a retreat and the jihadis used it. In all the combat footage, I have seen only two prisoners. The drone footage of Khan Shaykhun showed a ghost town with no real combat between the two sides.

The benefit of that was SAA casualties were low; and that is critical if you are going to keep offensive units at the front for an extended time, when you do not have the forces needed to be able to rotate them in and out.

So now the focus is what are Russia, Turkey and the Kurds going to do? Erdogan and the US say they are clearing the first section of the Syrian-Turkish border, but there is almost nothing in the news, and certainly no reports of combat with the Kurds. I suspect they will save that for the later, deeper part of the “safe zone”.

Today we heard that Putin and Erdogan have already had a phone talk, and how I would have loved to have listened in on that. We should get no details on it. Part of that call would have covered the “peace talks” that Iran, Turkey and Russia are due to have in less than three weeks, with Turkey hosting. There are Fellini-movie aspects to this thing now.

Poor Syria is not even a party to discussions about its own future, despite their 400,000 dead. But without Russia and Iran, it would have been a lot more. The US and Israel plan is to have Syria become Russia’s and Iran’s Vietnam, which is somewhat of a dream.

Yet, it is one where more Syrians will die; and the major part of the rebuilding of the country will be delayed. Right now, the major powers are using Syria, Iran and Venezuela as examples of what will happen to a country that does not accept a US/ Israeli/NATO hegemony.

They do not teach this part of American history in high school classes for a good reason. Are we not the non-barbarian horde sweeping out over the land now?...Jim W. Dean ]

On August 23, the Syrian Arab Army (SAA), the Tiger Forces and their allies fully liberated the northern Hama pocket, including the towns of Kafr Zita, Lataminah and Morek.