[ Editor’s Note: The Turkey-Kurdish border story was wiped off front page news as the SAA’s retaking north Hama dominated the Syria news. I expected the pendulum to swing back now the SAA is in a consolidation mode with its new gains.

But this is a strange story below as it does not say a word about the YPG Kurds, who have been the focus of Erdogan’s anger, and cover for his wanting to occupy northern Syria.

For example I am still waiting to see a list of terror attacks committed by the YPG Kurds inside the Turkish border area over the last two years, with all the details including how many YPG captured, etc. Corporate media has done its usual duck and hide routine by not asking these obvious questions.

So today we have the news of the SDF Kurds, obviously under the control of the US, destroying their fortifications, but we are given nothing on what the YPG Kurds are doing. So what’s up wid dat?

We had expected the first stage of the security zone to be implemented as part of some kind of compromise agreement. But for the 2nd and the 3rd stages I suspect that no one knows yet how that they go down. The “all quiet” on what the YPG Kurds are doing is proof of that.

But at the end of the day, who pay’s the fighters’ salaries, provides their weapons, ammo, food and transportation might have a lot of influence over what they do, despite their huffing and puffing.

And speaking of that, there is no quote from the Kurdish SDF General Kobani in this report, an obvious person to be having a statement from to back the story’s validity.

Is this story just a theatrical media event, as cover for the main parties still at logger heads with each other? Inquiring minds would like to know… Jim W. Dean ] 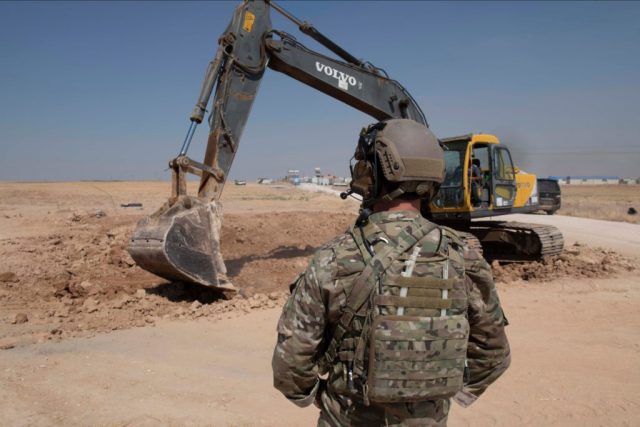 The Syrian Democratic Forces (SDF) have destroyed some of its military fortifications along the Turkish border under the recent U.S.-Turkish “peace corridor” agreement, the U.S. Central Command (CENTCOM) announced on August 23.

“Within 24 hours of the phone call between U.S. SECDEF and Turkish MINDEF to discuss security in northeast Syria, the SDF destroyed military fortifications, Aug 22,” a press release by the CENTCOM reads.

The CENTCOM added that the destruction of the fortifications demonstrates the SDF’s commitment to the U.S.-Turkish security mechanism framework.

Turkey and the U.S. reached the “peace corridor” agreement, earlier this month. The vague agreement is supposed to address Ankara’s security concerns in northeastern Syria, where the Kurdish-dominated SDF is in control.

The SDF has not commented on the agreement, or announced the destruction of its fortifications along the Turkish border, so far.

The Kurdish group is clearly complying with the U.S.-Turkish agreement. Nevertheless, it is yet to acknowledge this, likely to avoid public pressure.