[ Editor’s Note: Despite the sanctions Iran has continued at full steam in building up its defensive capability as its best defense against a foolish war by the US. It has unleashed its full technical capacity on a broad front.

Behind it Iran has the heavy industry and the redeployment of facilities and workers that have been hurt by the sanctions, to this key area. It is also making a huge political statement, one ignored by the media, that Iran feels a conventional military response will be sufficient for its needs.

But there is another unsaid statement lurking in the shadows. If the US pursues its offense and the EU plays weakling in holding up its end of the JCPOA, then Iran is going to revert back to cranking its nuclear program up, which it has every right to.

Only this time it will be much better able to defend itself from a preemptive attack. It can already destroy all the Gulf state oil facilities on the first day so that economic damage will be done, trigger a lynch mob looking for “who started this?”

Iran also has a low cost of production of these weapons systems, so it will be making them in large numbers, in a layered defense, making an effective first strike non practical.

For a “superior” west to unleash such an attack and an effective retaliatory one to result, the public of that country will be wanting the heads of the first strike perpetrators.

Unfortunately, contingency planning is standard in such situations to steer the public. If a retaliatory strike were successful, suspect a nuclear false flag to we woven into it so as to warrant a US nuclear retaliation.

Trump has already been hinting at this. And after the 100% stand down by all of our security agencies on the nuclear attack we endured on 9-11 with the neutron bombs bringing the WTCs down, this “tool” will certainly be used again whenever “they” feel it is necessary.

That will be the future price we will pay for 9-11 going unpunished… Jim W. Dean ] 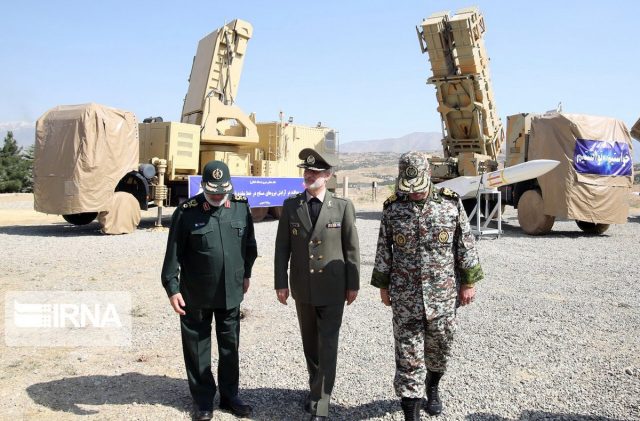 The surface-to-air missile system, dubbed Bavar-373, was unveiled during a ceremony on Thursday morning in the presence of President Hassan Rouhani, Defense Minister Brigadier General Amir Hatami and other senior military officials.

Bavar-373 is a mobile missile defense system designed to intercept and destroy incoming hostile targets. The system employs missiles that have a maximum range of 300 kilometers. The system is capable of simultaneously detecting up to 300 targets, tracking 60 targets at once and engaging six targets at a time.

According to the Iranian defense chief, “With this long-range air defense system, we can detect … targets or planes at more than 300 km, lock it at about 250 km, and destroy it at 200 km.”

The system is a competitor to Russia’s S-300 missile system and brings quite a few substantial upgrades over its Russian equivalent. It is also compatible with the Sayyad family of missiles — is also equipped with four vertical launching systems (VLS) capable of hot launching missiles.

Bavar 373 has two search and intercept radars, which can resist electronic warfare and electromagnetic bombs. In addition, the radars are capable of detecting anti-radiation missiles (ARM) that are used to confront air defenses.

‘US pressure only made Iran stronger’

Addressing the event, President Rouhani hailed Iran’s significant achievements in the defense industry, adding that the US’s pressure campaign against the Iranian nation over the past years has only backfired and pave the way for the Islamic Republic to make further progress.

Commenting on the newly-unveiled missile defense system, the president said Bavar 373 “is more powerful than S-300 and is in fact closer to [Russian] S-400,” an upgrade of Russia’s S-300 family.

Rouhani lashed at the US for withdrawing from a 2015 nuclear deal signed between Tehran and six world powers and reimposing sanctions on the Islamic Republic.

“Leaving the JCPOA means breaking the international law and regulations and [waging] economic terrorism,” he said, using an acronym for the official name of the accord, the Joint Comprehensive Plan of Action.

The Americans wrongly imagined that they could force Iran to surrender by trampling on international rules and piling up economic pressure on the Islamic Republic. Rouhani, however, reaffirmed that Iran would never surrender to bullying, and that the US’s excessive demands from the region will lead nowhere.

“There is no doubt that the US has not succeeded and will not succeed in any plot in the region,” said the president, adding that the Americans would “be the first to flee” if any danger is posed to the region.

Iran’s defense chief also delivered a speech at the event, saying the country has made great breakthroughs in all areas of defense in defiance of American sanctions.

He said that Iran has managed to produce “effective systems not only to counter aerial threats at…low, medium and high altitudes, but also to detect, track and destroy radar-evading aircraft and missiles from a safe distance.”

On Iran’s missile program, Hatami said, “We focus on the effectiveness of missiles through increasing precision, maneuverability, speed and conventional explosive power to overcome the enemy’s defense systems,” said Hatami.

Hatami reiterated that the projectiles are not designed to carry nuclear warheads, adding that Iran’s defense doctrine is merely based on deterrence.

“According to the strategic decision of the Islamic Republic of Iran based on the important and historical fatwas (religious decrees) of Leader of the Islamic Revolution [Ayatollah Seyyed Ali Khamenei] in the field of missiles, we have not designed any missiles with unconventional warheads,” he said.