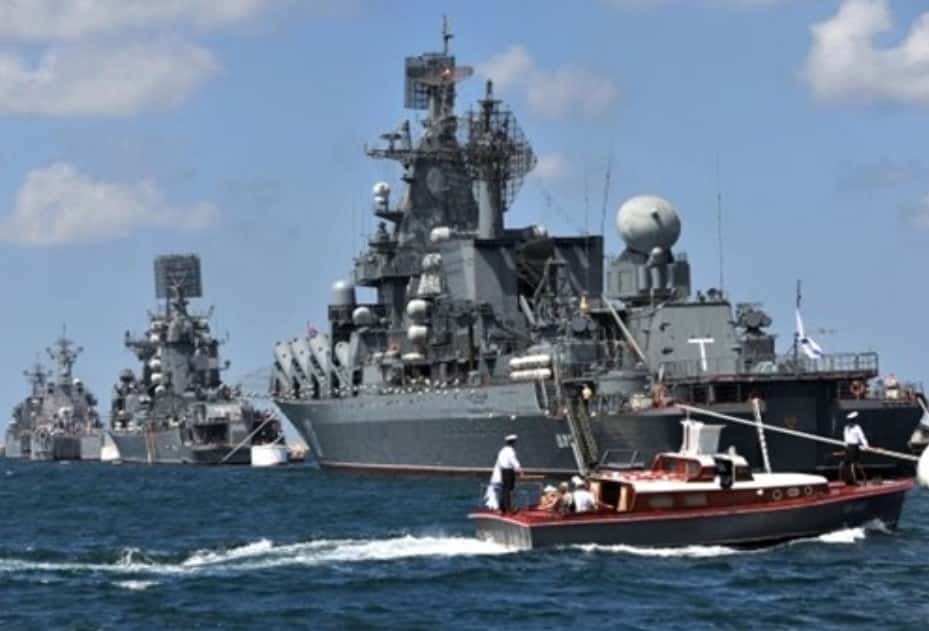 [ Editor’s note: While Trump, Netanyahu and Bolton are chasing an oil tanker that may or may not got to Syria, Russia is bringing in a convoy of new weapons including up-armored T90 tanks that defeat the American missile systems recently delivered to al Qaeda (funny…same people the US claims did 9/11).
Guarding these transports are components of the Russian navy armed with advanced air defense systems, accompanied by nuclear submarines and enough nuclear missiles to turn all of Europe into glass.
Do you wonder why Germany and France are distancing themselves from Trump?
Let’s let the US Navy, such as it is, use its flotilla in “the Med” and intercept these weapons according to Trump policy or, just perhaps, slink away and pretend they aren’t being told to go fuck themselves.
Maybe we can get the British to land on one of the ships and bully them into Gibraltar?  Ya think? … Gordon Duff ]

TEHRAN (FNA)– A Russian ship that is carrying a large supply of heavy military equipment, including tanks, is en route to the Syrian port city of Tartous as the government forces have started massive military operations in Northern Syria.

The Arabic-language Al-Youm news website quoted maritime naval observer Yoruk Isik as saying that a Russian cargo ship has passed the Bosphorus Strait en route to the Port of Tartous in Western Syria.

It noted that the Russian vessel is the second vessel dispatched by the Russian Navy to Syria in the past 10 days, and said that since it is very heavy, it is most probably carrying heavy military equipment such as tanks.

Al-Youm noted that the latest delivery by the Russian Navy comes at the same time the Syrian Army conducts military operations in Idlib, Hama and Lattakia provinces.

Russia has recently increased its weapons supply deliveries to Syria since the start of the military operation; this has proven to be incredibly important for the Syrian military as the loss of military equipment has been quickly replenished by their Russian allies.

On Monday, the Syrian army managed to enter Khan Sheikhoun after five years.

Also reports said on Wednesday that the local population in Ma’aret al-Numan in Southern Idlib were preparing themselves for the imminent entry of the Syrian Army troops into the city, adding that the people were eagerly waiting for the army’s military takeover.

He noted that the residents of Idlib and its countryside are expecting the Syrian Army to arrive in areas occupied by the terrorists, and said that large groups of residents of Ma’aret al-Numan and the city of Saraqib in Southern Idlib have visited the joint Syrian-Russian Command Headquarters for the implementation of peace plan.

Qorbi noted the massive presence of the terrorist groups in Ma’aret al-Numan and the Turkish Army’s occupying role in the region, and said that the Syrian Army is prepared to enter Ma’aret al-Numan.

He also pointed to the heavy defeat of the terrorist groups in Khan Sheikhoun city despite massive military backup by the Turkish Army and their retreat from the region, and said that negotiations are currently underway for exit of the Turkish Army troops from areas under its control in Hama.