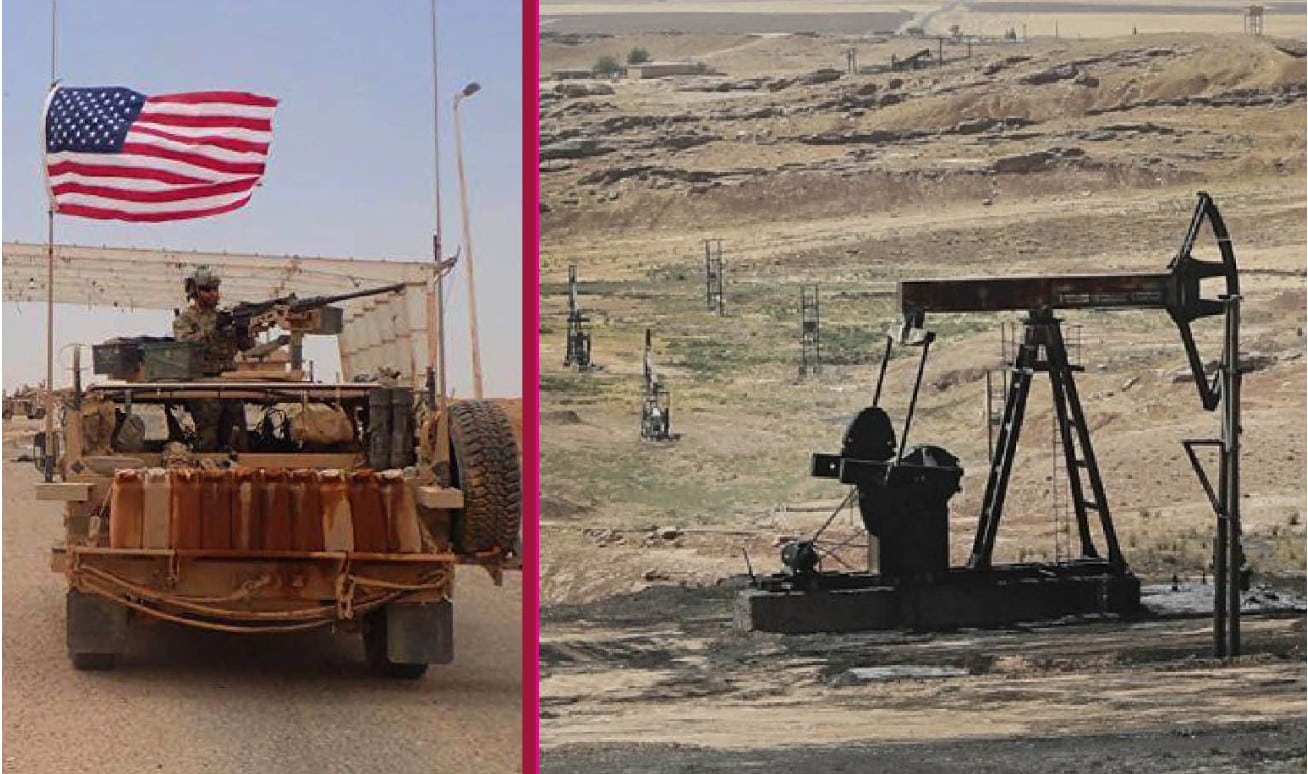 Until last year it was ISIS that exploited the oil fields of the Euphrates valley, in particular, that of Al Omar, in the province of Deir Ezzor, which became famous for the extermination of civilians led by US Air Force bombing raids, in Northeast Syria.

The (temporary) defeat of the Islamic State in the last stronghold of Baghouz left in the hands of the SDF (or Qasd), the Kurdish majority militias allied with the US army, the oil drilling in Rojava and in the Euphrates west side but now, according to a Russian high official’s claim, it is the United States, which first bought the smuggled oil from ISIS (in confirmation of the close ties) to use the most extremist terrorist formations of the FSA (the anti-Assad revolutionary army now almost defeated) to carry out operations aimed at commissioned oil theft

«Colonel-General Sergei Rudskoi, chief of the Main Operations Directorate of the Russian military’s general staff, told reporters Monday that the U.S. has mobilized about 2,700 “militants” in a 34-mile, self-styled deconfliction zone near the southeastern border crossing of Al-Tanf. He said these insurgents, including those from Maghawir al-Thawra and the Army of Free Tribes, were being transferred from Al-Tanf via U.S. Air Force helicopters in order to conduct “sabotage, the destruction of oil and gas infrastructure and commit terrorist attacks against government forces” in areas such as Al-Sweida, Palmyra and Al-Bukamal» Tom O’Connor wrote a few weeks ago in the New York magazine NewsWeek. 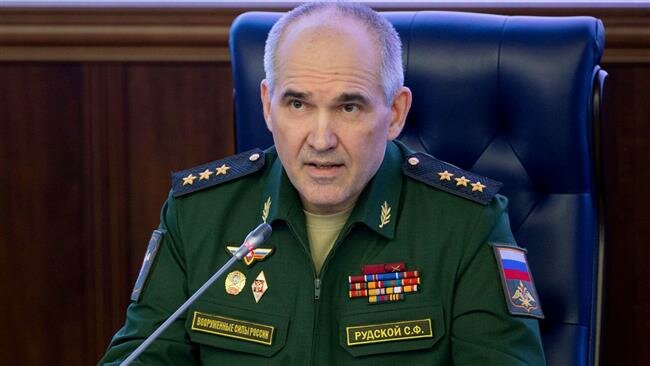 The news was reported, and therefore credited, also by the Syrian Observatory for Human Right, the humanitarian organization of Coventry that in recent months has assumed more objective positions than in the past when it was openly lined up against the Government of Damascus and in favor of the infamous White Helmets, the contingent of rescue trained by a former British military secret agent often complicit in the Qaedist Islamic terrorists of Al Nusra (now Hayyaat Tahrir Al-Sham), who control part of Idlib province thanks to military supplies from Turkey.

THE OIL’S PROCEEDS FOR THE ILLEGAL ARMED GROUPS

«Aside from training militants, the U.S. structures in Syria are involved in plundering oil facilities and deposits in the area across the Euphrates that belongs to the legitimate Syrian government. Lately, U.S. private military companies have been observed to actively beef up their personnel. Today, the mercenaries of the private military companies in Syria exceed 3,500 people» Rudskoi claimed.

According to the Russian general, these groups of contractors had «organized the production and sale of Syrian oil from the Conaco, Al-Omar and Tanak oilfields located east of the Euphrates River in a criminal scheme to loot the national wealth of Syria». The Moscow official claims that the proceeds of these thefts were «spent on maintaining illegal armed groups, bribing the sheiks of Arab tribal unions and fomenting anti-government sentiments».

The journalist O’Connor recalls that «the U.S. has long been accused of intervening abroad in support of oil interests, especially since the 2003 invasion of Iraq that toppled President Saddam Hussein on charges that later proved to be false». And despite the fact that the US has gained ever greater energy independence, these accusations have also referred to «the country’s role in the NATO intervention that ousted longtime Libyan leader Muammar el-Qaddafi in 2011 as well as President Donald Trump’s ongoing efforts to depose Venezuelan President Nicolás Maduro and isolate Iran through sanctions».

Rudskoi claimed Monday that the U.S. private military company operations in Syria were being «carried out under the guise of aviation of the international antiterrorist coalition» and «represents a smuggling business taken by the Americans from ISIS. The continued supply of arms and military equipment by the United States to the eastern bank of the Euphrates also causes considerable concern» because « in exchange for assistance in oil smuggling, the United States is ‘beefing’ up both Kurdish and Arab formations with arms, and they subsequently use them against each other.”.

Added to this is also the concern about the return of ISIS as just last week Secretary of State Mike Pompeo told Fox News Channel that there was still “a handful” of jihadists in Syria while others moved into Iraq. But the White House official pretends to ignore the fact that many of the Isis commanders were freed from Afghanistan or Syria by the US military and transported by helicopter and truck to various strategic points in the Iraqi desert, in the Afghan areas bordering the former republics of the Soviet Union and also in Nigeria.

THE ROUTE OF SMUGGLING OIL

The route of the smuggling oil from Deir Ezzor to Turkey may explain the strategic importance of Rojava, controlled by the SDF militias largely composed of Kurdish fighters from YPG close to the PKK, the Kurdistan Workers’ party, considered by Ankara to be terrorists. That is why the threat of Turkish President Recep Erdogan to invade Syria to the east of the Euphrates.

A threat harshly contested by the US that thanks to Kurdish allies have full freedom of action in the territory where, last February, there was a fierce battle near oil and gas fields between the army of Global Coalition, Us led, against Daesh Lebanese Hezbollah Shiite militias and Iranian Quds allies to the government of Damascus supported by Russia. Pompey declared that among the approximately 200 victims there were also Russian contractors from the private military company Wagner.

“In 2015–2017, according to American analysts, oil became the largest source of income for ISIS. It is known that at the peak of its power, the self-proclaimed «caliphate» received, according to various estimates, up to $5 million a day from the sale of oil. For example, in 2015, experts estimated ISIS income at $3 million per day — and this is the most conservative estimate» reports the blog Alaff84 citing various authoritative sources in a very detailed report on the smuggling oil route in Syria.

“Even despite the subsequent decline as a result of the successful military operations of the Syrian troops and the Russian Aerospace Forces, the income of terrorists from oil smuggling, according to the Financial Action Task Force on Money Laundering (FATF), was $1-2 million daily – we read in the article – In September 2017, when the Syrian Arab Army, with the support of Russian aviation, began to liberate the province of Deir-ez-Zor, the Kurdish armed forces also began to move hastily towards this area. While the government forces were engaged in fierce battles with ISIS, the “Syrian Democratic Forces”, mediated by the US military and security forces, simply negotiated with the terrorists, which is amply evidenced”.

THE TIES BETWEEN ISIS, US AND SDF FORCES

“Oilfield Al-Omar, like many other oil fields, was transferred without a fight after negotiations between the ISIS and representatives of US forces. Moreover, the militants of the “Islamic State”, guarding the oil fields, have fallen under the banner of the “Syrian Democratic Forces”» recall Alaff84 also remembering that subsequently, the US established a military base in the immediate vicinity of black gold wells, as reported by representatives of the same Kurdish armed units in the spring of 2018.

The Federal News Agency has repeatedly reported about collusion between the United States, ISIS terrorists, and Kurds — for example, back in September 2017 it became known that the United States and Kurds agreed with the terrorists about the transfer of the large Tabia oilfield where Conoco plant was located.

«The captive ISIS militant said that they were ordered not to destroy the plant’s buildings and in no case to not open fire on the Kurds. This information was confirmed by a Lebanese journalist Firas Shufi in his film» the Arab website adds confirming the umpteenth complicity between the Islamic terrorists of Daesh, the US and their allies of the SDF and the FSA who, through the extremists of the Maghawir al-Thawra control the Al Rukban refugee camp, considered a shelter and training place for Muslim extremists. As well as a center of proselytism for the new generations of Sunni Arabs destined to grow by cultivating hatred for Westerners and Shiites in the name of Jihad.