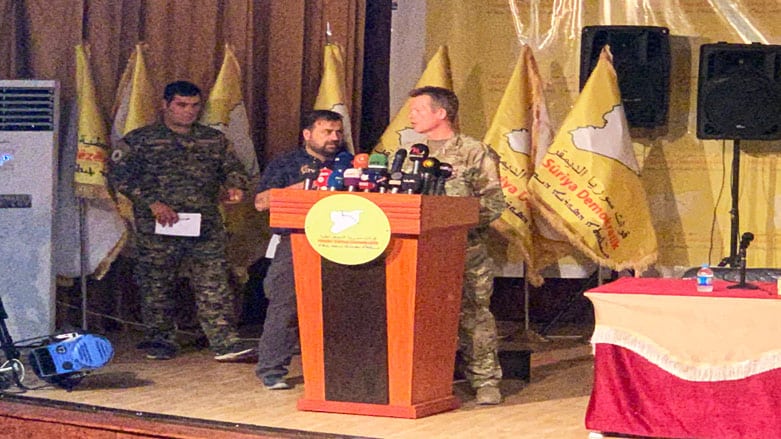 [ Editor’s Note: Well, all of the Kurdish irons are in the fire now. While the SDF is still dealing with ISIS sleeper cells and unhappy Arab charges that they have subjugated in the traditionally Arab land they have taken over, and with Turkey knocking on their back door, they now want to bring Damascus in on the free for all.

Why do I sense that maybe the Kurds think they can play everybody off against each other and come out on top? Is the American backing the tipping point for their making that play?

Are the Americans telling the Kurds that if Damascus will not give them the sovereignty they want, they can just take it and the US will back them up militarily?

How would the US justify such a “interference in someone’s foreign affairs”? All it would have to do is say it was fighting against terrorism, as that is the magic fairy dust to sprinkle on anything you want to do these days, if you are of the unipolar mindset.

A workable deal would be best for all, as that would get not only the major fighting over with, but just as important, start rebuilding Syria so people could see a brighter future ahead of them as a magnet to cooperate in a joint effort.

We shall see. The news has been short lately on threatening statements from Turkey. It seems to be holding its cards close to the vest.

Syria sticks to its north star position as usual; it will fight until they secure every inch of Syrian territory, which puts the Kurds on the target list, especially if they think they can bargain Syrian Arab lands taken with US help during the ISIS war.

I can see this dragging out for some time before a solution, but I will hope that everyone is tired of all the war and uncertainly hanging over their lives… Jim W. Dean ]

HASAKAH (Kurdistan 24) – The Syrian Democratic Forces (SDF) on Saturday, in the presence of representatives from the US-led coalition, urged dialogue between the Syrian government to and local Kurdish officials during the group’s first annual conference in the northeast city of Hasakah.

Abdi also said the conference would be the basis for building a military force that could guarantee a united, free nation.

“We are here to lay the foundations for our military action to protect our areas in the coming post-Islamic State period and to spread security and stability in our region and all over Syria.”

Abdi also warned that the fight against the extremist group hasn’t ended and that its fighters continue efforts to rebuild its depleted force.

“We are facing great military challenges that threaten the future of our country, especially the Islamic State which is still strong and still insists on destroying this nation. We say that the new phase is difficult since the Islamic State is spreading in the region and among populated areas through its sleeper cells.”

Abdi further stated that the Turkish attack on Afrin has negatively affected the SDF’s campaign against the group’s militants.

“We affirm that Afrin is an important step for the success of the peace process between us and Turkey,” said the commander. “The return of Afrin to its people is one of our main points. Without this, there will be no peace in Syria. Turkish threats hamper the efforts of our forces and of the international coalition to defeat the Islamic State,” he said.

He continued, “We announce that we will exert all efforts to achieve compatibility with the Turkish state, in coordination with the United States. There are preliminary agreements to establish security in the region through border points and we will be a positive party to this process.”

Brigadier General Nicholas Pond of the International Coalition for Operation Inherent Resolve (CJTFOIR) also spoke, confirming that the coalition remains committed to supporting the SDF in the ongoing fight and stability efforts as well. He also warned Turkey against launching operations in northeast Syria.

“Uncoordinated military activity will undermine our shared interests,” he said, and mentioned the proposed buffer zone in the area.

“The United States and Turkey will plan and implement a security mechanism from a joint coordination center,” he continued. “It will be implemented in stages. It will allow the coalition and you, our partners, to remain focused on achieving an enduring defeat of the Islamic State.”

General Pond further explained, “This prevents a security vacuum from emerging and addresses the security concerns of our NATO ally.”

Despite Turkish threats against the SDF, which Ankara claims is an off-shoot of the outlawed Kurdistan Workers’ Party (PKK), the Syrian Kurdish administration seems optimistic that some agreement with Turkey is possible in the near future as long as the US-led coalition continues its support.

With that support, Syrian Kurds could likely play a significant role in calming the situation in northeast Syria, especially given Turkey’s increasing threats to invade it.

Along with the Kurdish self-administration, the SDF is banking on the chance that this will place them in a stronger position in talks with Damascus and increase the chance it will recognize and guarantee the establishment of meaningful Kurdish rights in Syria.