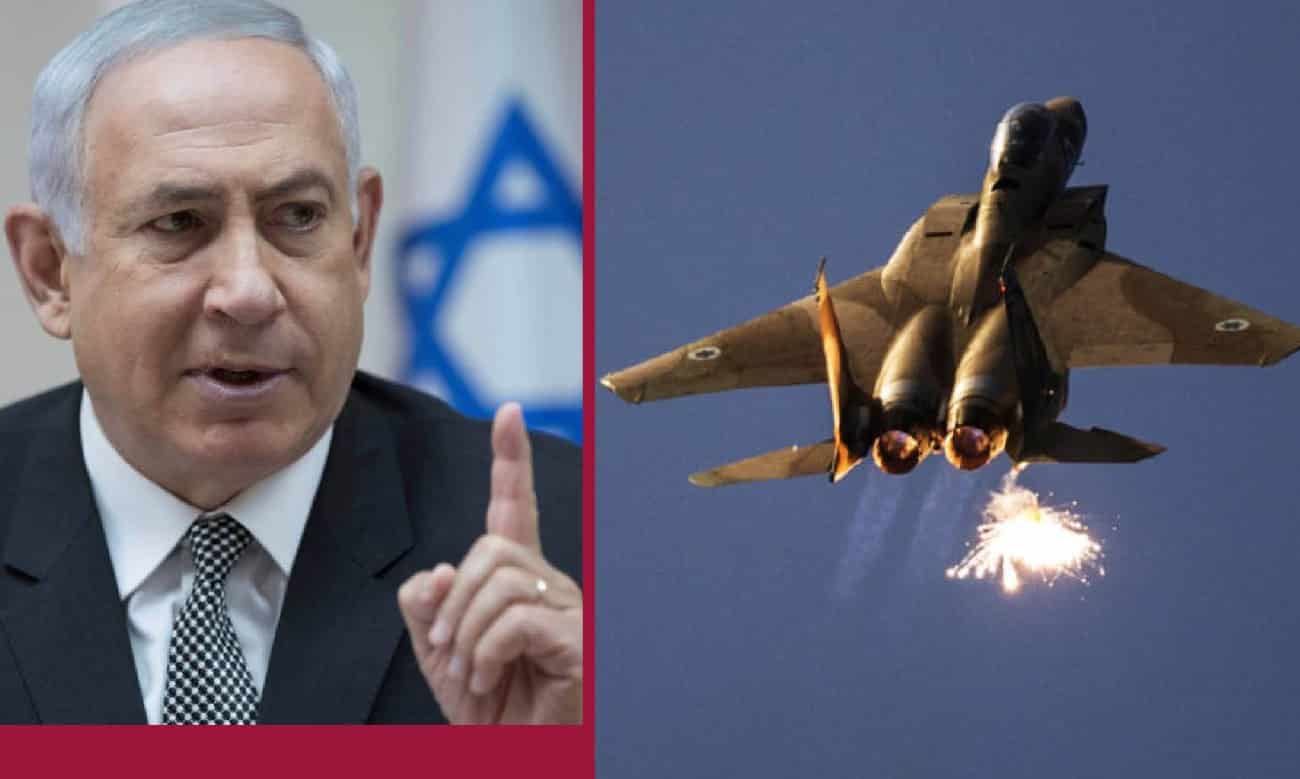 It is now certain. Just in the days when the tensions in Syria for five battle zones are getting hotter, the international Zionist gangster Benjamin Netanyahu, although he is a premier of Israel in prorogatio (pending the new elections of 17 September 2019) takes advantage of it to try to unleash hell. To the cry “kill first”, he sent the aircraft’s F16 of the Israel Defense Forces to hit the military positions of the Iranian Quds Forces and the Lebanese Hezbollah near Damascus, allies of the Syrian government of Bashar Al Assad.

The agreement obtained by Russia in recent weeks has served no purpose to show Syria’s goodwill in the de-escalation of tensions and agreed with Assad to transfer Shiite militias (and therefore religious enemies of the Sunni Arab friends of Tel Aviv) from the border areas with the Golan highland (a Syrian territory illegally occupied since 1967 by Israel), to transfer them from the area of Al Qunaytirah to more inland areas south-east of Damascus.

Right there, near the village of Aqraba, the raids tried to hit the Iranian and Lebanese militias that helped Assad defeat the ISIS. The news was confirmed by both the Tel Aviv army and the Syrian Arab News Agency

In a rare admission of responsibility for attacks, often denied or commented out by the Netanyahu government, the IDF issued an official statement on Twitter: «We just prevented a pending, large-scale attack of multiple killer drones on Israel by striking Iranian Quds Force operatives and Shiite Militia targets in Syria».

Israeli military action in Syria was then officially motivated again on Twitter and to Prime Minister Netanyahu: «In a major operational effort, we have thwarted an attack against Israel by the Iranian Quds Force & Shi’ite militias. I reiterate: Iran has no immunity anywhere. Our forces operate in every sector against Iranian aggression. If someone rises up to kill you, kill him first».

«A military source told SANA that at 11:30 pm on Saturday, the air defenses detected hostile targets approaching from above the Golan to the surroundings of Damascus, and the attack was dealt with immediately and effectively, destroying most part of the Israeli missiles before they could reach their targets» report SANA.

There was no immediate confirmation of death or injuries, although Israeli military spokesman Jonathan Conricus said there could be victims among the “militia”, reports the Russia Today network. In a previous attack in recent weeks, however, civilian homes had also been affected, causing the killing of many persons and a toddler. But Israel’s war action in the following hours has also spread to Lebanon.

THE SUICIDE DRONES AGAINST LEBANON

Lebanon’s National News Agency is reporting that Israeli jets flew at a low altitude over the country’s third-largest city, which is approximately 40km south of the capital Beirut. The reported raids follow a flurry of Israeli activity in Lebanon and neighboring Syria. In the early hours of Sunday morning, an explosion hit a southern suburb of Beirut in what Hezbollah labeled an “Israeli drone attack.”

One drone failed to detonate and crashed, while a second UAV exploded near Hezbollah’s media center, a spokesperson for the militant group said. No casualties were reported from the incidents, which the organization and the Lebanese Army blamed on Israel. Prime Minister Saad Hariri confirmed the IDF’s “suicide drone” action as «an open attack on Lebanese sovereignty».

I have been following the war in Syria since the beginning of 2018 and I have never heard of a “real” attack by Forza Quds and Hezbollah against Israel which, just like the US in Douma’s false-flag chemical attacks, then results organized by terrorists with the complicity of White Helmets, they launch accusations to justify their attacks aimed at provoking a counter-offensive by the Syrian Arab Army and the explosion of an unlimited conflict to snatch other lands from the neighboring and oil-rich country.

THE CIVILIANS ABDUCTED BY TERRORISTS IN IDLIB AND AFRIN

This attack turns out to be even more serious because it comes at a very delicate moment for Syria, which has to face up to 5 zones of tension.

The first is in Idlib where Assad’s army freed the city of Khan Sheikhoun from the terrorists of Hayat Tahrir Al-Sham (HTS), the first Qaedists named Al Nusra financed and armed by Turkey. The Turkish army’s n-9 observation point at Morek is thus completely surrounded. And the same Ankara militias were bombed by the Syrian Arab Army, with the support of Russia. In addition, two Turkish military jets were intercepted by the Su-35s of the Russian air force which forced them to return to base.

While the Syrian army advances in Idlib province, reducing the area controlled by HTS Sunni Islamic extremists to Homs, 115 rebels have surrendered to the authorities and handed over their arms to join the Damascus social reintegration project. But Hayat Tahrir Al-Sham militiamen, as reported by Syrian Observatory Human Rights (SOHR), have kidnapped numerous civilians, probably to make them human shields to be used as victims in the Russian and Syrian air force bombings on terrorist artillery positions.

The alarm remains high even in Afrin where the jihadists protected by the Turks in the Operation Olive Branch continue to kidnap Kurdish civilians to ask for their ransom to families and to finance themselves. Six people have been kidnapped in the last few days. Those who do not have the money to pay are likely to see their relatives killed, as happened in June even to a child with Down Syndrome.

Even more serious is the situation in the Governorate of Deir Ezzor where three different militias are in conspiracy with American mercenary soldiers and the US army as reported in the previous article on oil smuggling.

THE RETURN OF ISIS JIHADISTS

“The security chaos escalates targeting civilians and military personnel, in conjunction with the increased activity of cells of the “Islamic State” Organization northeast of Syria, where the Syrian Observatory for Human Rights learned that unknown gunmen assassinated a citizen yesterday in al-Kashkiyyeh town in the eastern countryside of Deir Ezzor, where they shot him directly with machine guns – report SOHR – And with the fall of more casualties, it rose to 352 fighters, civilians, oil workers, and officials in service parties, the number of people killed in areas within the 4 provinces of Aleppo, Deir Ezzor, Al-Raqqah and Al-Hasakah, in addition to Manbij area in the northeast of Aleppo Province, which is controlled by the Syria Democratic Forces, where the Syrian Observatory monitored these cells assassinating 96 civilians including 5 children and 4 women in the eastern countryside of Deir Ezzor, al-Hasakah countryside, al-Raqqah city and countryside, and Manbij area».

Added to this is the assassination of 252 Syrian Democratic Forces (SDF) fighters including local leaders in the same areas, and 4 members of the International Coalition were killed, including the Syrian Observatory for Human Rights documented dozens of wounded due to of these murders.

Members of the cells of the ISIS attacked a car belongs to the Syria Democratic Forces with machine guns, which kill one member and seriously injured another on Monday morning in al-Sabha town east of Deir Ezzor.

A CHILD KILLED BY SDF MILITIAS IN DEIR EZZOR

«The US-backed Qasd militia continues its brutal policy against civilians in the eastern Al-Jazeera region of Syria. Local sources in southern Hasaka area talk about the death of 13-year-old Osama Obeid due to injuries sustained in bullets fired by Qasd members after storming the child’s home. Fearing to be taken to the coercive recruitment camps, Osama fled when the militia stormed his home but was shot dead – writes Mazen Eyon for SANA – The sources added that when families tried to save the child, Qasd members also shot at them, injuring three other civilians. The Qasd militias always assault the houses in the villages of the Hasaka countryside under the pretext of looking for “sleeping cells” of Daesh terrorists to arrest young people and children for coercive recruitment camps. Those militias set fire to tens of thousands of hectares, planted with wheat and barley this season because families refused to cooperate with them”.

THE SAFETY BUFFER ZONE IN ROJAVA

In addition to this, a further outbreak of tension is taking place on the border between Rojava, the area of ​​the Syrian desert east of the Euphrates (and the oil fields of Deri Ezzor) controlled by the YPG Kurdish Popular Protection Units, and Turkey. The US military has reached an agreement for the creation of an operations center commanded by a US Army general and a Turkish one and the first helicopters arrived to build the military base. The Syrian Democratic Forces (SDF) meeting for the annual conference in Heseke with the participation of 600 delegates appreciated the efforts of American mediation to prevent the Turkish attack in the region but as declared by the general commander Mazlum Abdi «peace will never exist be until there is a return of the Kurdish population to Afrin », occupied by Turkey and by jihadist criminals in their service.