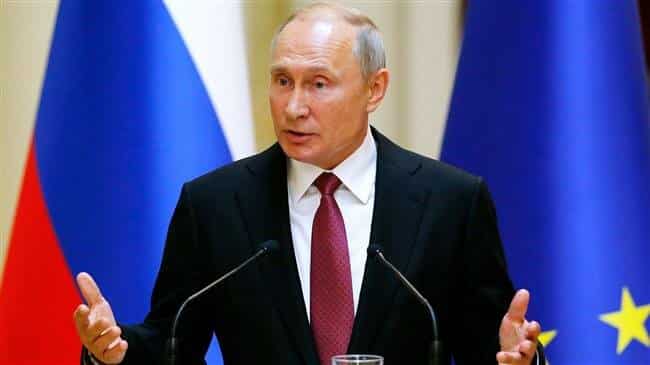 [ Editor’s Note: Erdogan debases himself once again with claims that attacks on his terrorist buddies in Idlib endanger Turkish national security. The only theoretical basis for that claim would be if Erdogan considered Idlib part of Turkey, which of course his statement confirms that he does.

He thinks the rest of us are all stupid, or that he has both Russia and the US by the noogies over things like Russia’s gas transit pipelines and the S-400 deals, and the US via Turkey being a NATO member and an F-35 partner who already has some of that technology through the joint production agreement.

Putin as always, issues a measured statement, while ignoring Erdogan’s victim claims. The theater of the absurd will get crazier when Turkey hosts the next Syrian peace conference in a few weeks, where Erdogan, as a guarantor of the former Astana process, will be the chair despite his operating two offensive operations inside Syria against not only Syria, but the US and Russia.

This is somewhat of a clue about Erdogan being an ally to no one but himself – kind of a Turkish Trump via his gangster methodology and attitude, minus the under age girls. Erdo can huff and puff all he wants, but the Idlib advance by the SAA and Russians will roll forward.

Erdogan is soon to have his hands full with a possible Kurdish war, if he starts shooting at the SDF Kurds; and we will see what the US does to support its Kurdish proxies. As for Idlib, we have one Turkish observation post already encircled, plus reports of many north Idlib civilian facilities being converted into Turkish military bases.

We will find out if the Russians hid a kill switch inside the Turkish S-400s, but I doubt it, because Erdogan bought them on credit and would simply not pay, and threaten to turn them over to the US. This gets crazier by the week… Jim W. Dean ] Kremlin spokesman Dmitry Peskov made the comment during a press conference in the capital Moscow on Monday, three days after Erdogan said offensives by the Syrian troops, backed by Russian air cover, were purportedly causing a humanitarian crisis and threatening his country’s national security.

“Putin has repeatedly said he understands the concerns of our Turkish colleagues … but at the same time the president remains … concerned about the activation of action by terrorist elements from Idlib that cannot be (left) without being stamped out and destroyed,” Peskov said.

The government troops, supported by Russian airstrikes, are resolute to liberate the province from the grips of militants, who have practically taken the civilians hostage.

On August 5, the Syrian army announced the start of an offensive against foreign-sponsored militants in Idlib after those positioned in the de-escalation zone failed to honor a ceasefire brokered by Russia and Turkey and continued to target civilian neighborhoods.

Moscow, a key ally of Damascus, launched its military campaign against the Daesh Takfiri terrorist group and other terror outfits in the Arab country in September 2015 at the Damascus government’s request. Russia’s airstrikes have significantly helped the Syrian forces deal heavy blows to foreign-backed militants operating in the Arab country since 2011.

Idlib offensive does not violate any accord with Turkey: Russian FM

Separately on Monday, Russian Foreign Minister Sergei Lavrov stressed that Syrian army’s offensive in Idlib, supported by Russian airstrikes, did not violate any agreements with Turkey.

On Friday, the Syrian army officially announced the liberation of the strategic town of Khan Shaykhun south of Idlib along with other localities from the clutches of militants.

Syrian troops already encircled militants and a Turkish military post in northwest Syria. Damascus has repeatedly slammed the presence of Turkish troops in its northern parts.

Additionally on Monday, the Turkish president said that his country’s army troops would enter a planned safe zone in northern parts of the Arab country “very soon.”

“We are slowly making progress in our efforts to establish a safe zone,” Erdogan said, adding, “Just like many other issues some saw as untouchable, we are putting the east of the Euphrates issue on track.”

Earlier this month, Turkey and the US agreed to establish a so-called joint operation center for the planned safe zone along Syria’s northeastern border. However, both Ankara and Washington have so far given few details on the size of the zone or the command structure of the forces to operate there.