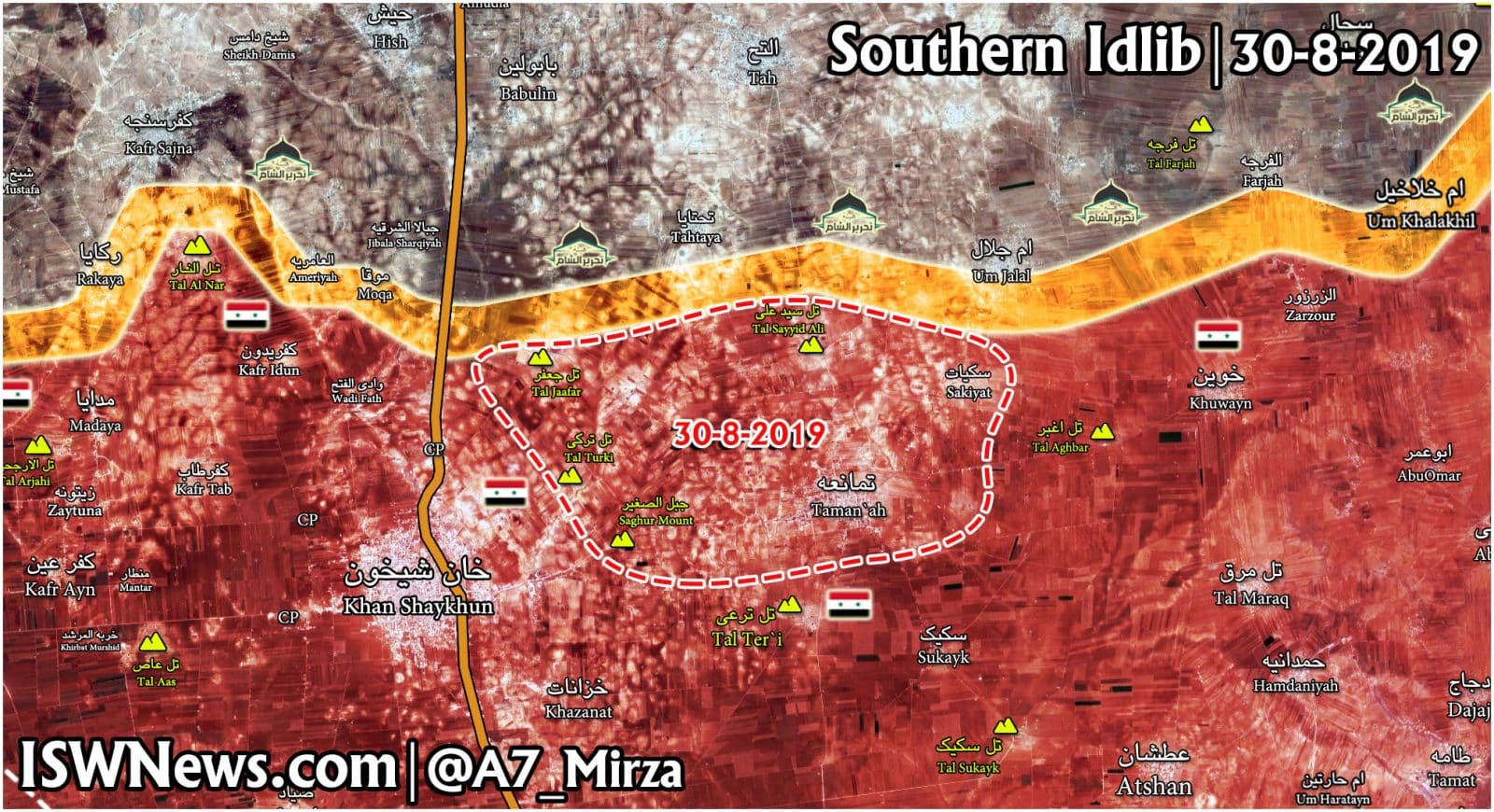 [ Editor’s Note: Today saw the SAA tightening its south Idlib front by taking the al-Tamanah area NE of Khan Shaykhun. Shortly afterwards a ceasefire was called for from the Russian conciliation center. As with all of these in the past the jihadis will use any respite to shuffle forces around, resupply them and launch new attacks.

I suspect the joint Syrian-Russian command expects this and will track where these reinforcements go so as to be able to attack them quickly when the ceasefire is broken.

A Russian commando squad took out an entire unit of Ahrar al-Sham jihadis today, continuing to sharpen the skills of its special forces troops. Those involved will spend years training others how to do the work.

All sides will be focused on gaining the upper hand on the battlefield prior to the Turkish hosted peace conference coming up mid September. You can rest assured that Erdogan will be flooding in replacements and supplies to his proxy terrorist forces to make up for those recently lost to keep his grip on Idlib province which gives him major leverage in any peace deal.

Meanwhile the Russians continue to cycle their armed forces units through the Syrian cauldron to give as many as possible real combat experience.

In 2017 I clearly remember when Putin was asked by a reporter about the cost of the Russian operation in Syria, he casually told them that the Russian command was using its training budget to fund the operation so in effect there was no extra cost at all. I was surprised that he would admit that.

Virtually all of Russia’s pilots have flown combat missions in Syria and I suspect a lot of its Special Forces personnel have come through the region, also.

Up in the north in the Kurdish area we have a video showing a night operation with Kurdish snipers with night scopes, from the Afrin Liberation Forces, tearing up a Turkish proxy militant unit. This is an example of more highly trained fighters being fed into this conflict to attack regular units to break their moral… Jim W. Dean ]

The Syrian Arab Army (SAA) and its allies responded to recent militant attacks near Abu Dail with a limited offensive in the area.

In the first phase of the offensive, SAA units liberated Khuwayn al-Kabir, Ard al-Zurzur, the Aghir hilltop, and farms near al-Tamanah. After this, government troops attacked militants’ positions inside al-Tamanah itself.

Hayat Tahrir al-Sham, the al-Qaeda-affiliated Wa Harid al-Muminin operations room and the Turkish-backed National Front for Liberation are the main SAA opponents there. They carried out a counter-attack, involving a suicide bomber, but were not able to take the lost areas back.

It is expected that the Syrian Army could develop its advance even further. Despite declarations about the Assad regime’s aggression and the need to respect the Idlib ceasefire by mainstream media, militants continue to attack SAA positions in southern Idlib on a regular basis.

By this move, Ankara is likely seeking to limit the expected SAA progress in the event of a large-scale advance on Idlib.

The Syrian Armed Forces have renamed the Tiger Forces, led by Brigadier General Suheil the Tiger al-Hassan, to the 25th Special Forces Division. Over the past few years, the Tiger Forces have participated in the most intense battles across Syria and become one of the most widely-known pro-government formation around the world. They will likely continue this tradition under the new name.