ROBERT STEELE:  I am the one who has been beating the drum on the need for a Trump Studio and related Truth Channel (a federated social media ecology that cannot be censored) along with an Open Source Agency to create Open Source Intelligence — the truth at any cost lowers all other costs.

TRUNEWS has provided a phenomenal overview of what is becoming obvious: Steve Bannon, Bill O’Reilly, and Glenn Beck as well as Fox News are all massive failures; the first three are desperately scrambling for a solution to their financial, mental and physical health issues; and they might hurt the President if he is foolish enough to let them manage a Trump Studio. Fox is done — I agree with that — but second string losers with sexual and alcohol issues are not the answer.

The graphic below shows the strategic approach that is needed, combining four elements none of these people could ever integrate: grand strategy, Trump Studio, Truth Channel, and Open Source Agency.

Throw in a National Prayer Office and the changes to the White House Administration I cover in my recent “If I Were President” briefing, and the President is guaranteed the Mother of All Landslides as well as a future  bully bullpit that will keep him front and center for decades.

I am the only one who has done the homework on each of the four elements and the only one with the national network of subject matter experts that would give the President what he cannot get now from the secret world or his Cabinet or his White House staff: the truth about everything in unclassified form suitable for sharing with the public.

There are useful thoughts to be harvested from the outliers (NewsMax, One America, Sinclair TV) but they don’t get the importance of BOTH a Trump Studio AND a replacement for #GoogleGestapo as shown below and they have ZERO understanding of why holistic analytics and true cost economics — the truth about everything — is the secret sauce that makes the President both powerful and authentic.  Embracing losers will make the President a loser. 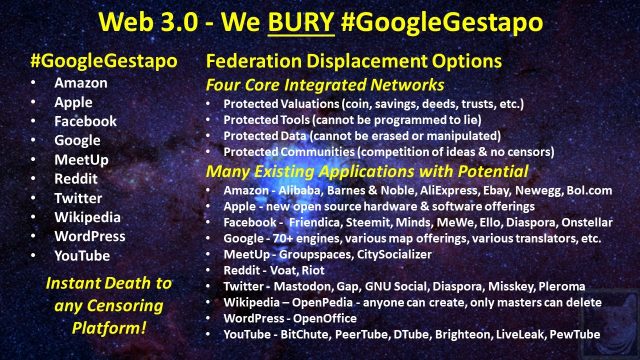 I can have the White House press room cleared and all four elements fully operational within ninety days of a Presidential “Go.” Immediate benefits to the President will be achievable within fifteen days of “Go.”

Robert Steele: If I Were President

CounterPunch: Robert Steele on Counter-Coup – How Trump Can Win By Restoring Integrity to the Electoral Process and the US Government