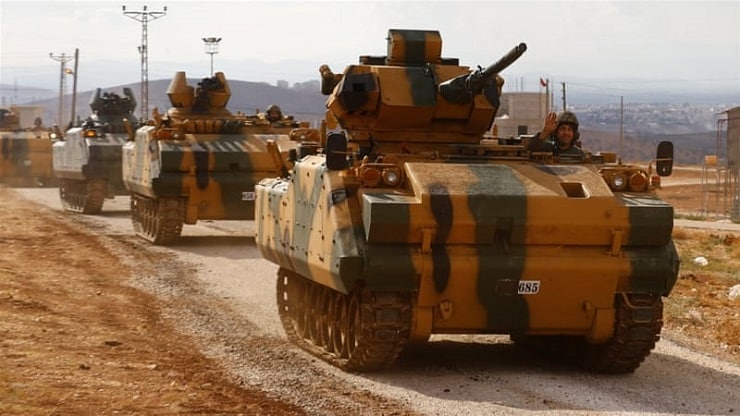 [ Editor’s Note: Salman did not mention that Idlib is not only Turkey’s Achilles Heel, but Syria and Russia’s, too. The drone attacks on the Russian air base are equipped via the Turkish pipeline and terrorist safe zone in north Idlib that Erdogan has kept supplied so well.

Iran has not uttered a peep regarding Erdogan’s duplicity, as it has critical business dealings with Turkey just like Russia does; but Moscow has been a key partner in the south Idlib advance, both in the air and on the ground.

Iran’s efforts in Syria are more low key now, as its people are targets for the Israelis while Turkish troops sleep well, knowing that no IDF plane will be bombing them in their sleep.

We had news late today of major Syrian forces staging west of Aleppo. This seems to indicate one of two things, with the first possibility being has Russian and Syrian Intel learned of a planned new Jihadi attack on Aleppo to disrupt Syria focusing on its best troops pushing in from south Idlib?

Or second, the SAA may be planning to open a new front attacking northern Idlib to be able to threaten its Turkish supply lines and causing the jihadis to deal with a two-front SAA advance.

We should know in a few days. I doubt Assad would be moving major forces around now, merely to have them do nothing at their new destination. As I wrote earlier in the week, Syria wants to have a successful counter attack in progress on Idlib, as the Astana peace meeting takes place mid September in Ankara with the three guarantors… Jim W. Dean ]

Turkey’s ambitions for Idlib have been put to test not merely due to the situation it is confronting in Syria, but also due to its own strategic choices about its designs regarding the Syrian war’s end-game.

On the one hand, its particular interests in Idlib are testing its ties with Russia, and on the other hand, it is fast running out of options to secure its own interests. As a matter of fact, Turkey’s inability to deal squarely with terror groups – which Russia and Syria want to eliminate – is putting it in a conflicting position with both Russia and Syria.

Russia and Syria in turn are pursuing an objective of ‘recovering every inch of Syria’ from these groups. Therefore, Turkish and Russian interests aren’t really converging as far as Idlib is concerned.

Criticizing Russia & Syria’s offensive in Idlib, Turkey’s Ministry of Defence said in a statement that the offensive was in violation of existing memorandums and agreements with the Russian Federation and that [Idlib] was turning into a “humanitarian drama.”

Notwithstanding the Turkish position, the reality is that the memorandums and agreements had stipulated that Turkey would neutralize Idlib-based jihadi groups, including those affiliated with the Tahrir al Sham group. This, however, hasn’t happened.

On the contrary, terror groups have gradually come to control more territory than they had when the above-mentioned agreements were first signed.

Russia’s Vladimir Putin put the Turkish ‘war of words’ on Russia to a severe test when he contended in a recent press conference that before the establishment of a demilitarized zone in Idlib by Turkey, the terrorists had controlled fifty percent of the province’s  territory, but now 90% of Idlib’s territory is under the terrorist groups’ control.

“We see them staging attacks from there. Moreover, and it is very dangerous, we see militants moving from this region to other parts of the world, and it is an extremely dangerous thing,” Putin said, while also stating that numerous attempts at attacking the Russian airbase at Hmeymim have all been staged from the Idlib zone. “That is why we support efforts of the Syrian army which is conducting local operations to neutralize these terrorist threats,”  he concluded.

What is evident from Putin’s comments is that Turkey hasn’t been able to fulfill its commitments regarding freeing Idlib of terrorist militias and that this situation was turning into a serious threat not only for Russian interests in Syria, but was also becoming a stumbling block in the way of Syria’s complete territorial recovery.

Turkey’s own inability to deal with terror groups notwithstanding, what is also adding to Turkey’s difficulties is the current state of relations with the US, which is not in a mood to accommodate Turkish interests, nor is it willing to abandon its Kurdish allies.

This is evident from the way the US continues to play delaying tactics with Turkey regarding creating a safe-zone in northeastern Syria, stretching about 430 kilometres long and 30 kilometres deep.

Turkey has been unable to convince the US of getting rid of Kurdish forces, and Turkey has been unable to itself clear Idlib of its own sponsored groups as well as ISIS. Turkey’s fundamental problem remains its inability to change its basic strategic understanding of Syria and the way this understanding continues to see a Syria without Assad in power.

For Turkey to come out as a genuine player contributing to Syria’s recovery and aiming to eliminate terror groups rather than harbour them, it must first shun its policy of supporting elements that were and still are at the helm of destroying Syria.

Its inability to change its fundamental position vis-à-vis Syria and the Syrian government has put it between the devil and the deep blue sea. On one hand, it now risks a massive inflow of refugees from the Idlib region due to the Syrian and Russian offensive, and on the other hand, it is also facing a permanent ‘Kurdish threat’ along its border.

On top of it is the fact that its dual position in Syria has led to a situation whereby it is becoming increasingly unable to control either Russia or the US. For the US, Turkey is an antagonist as far as its position vis-à-vis Kurdish forces is concerned.

For Syria and Russia, Turkey’s continued support for groups like Tahrir al Sham constitutes direct foreign interference in Syria, a fact that, unless Turkey manages to change it, might turn out to be a turning point in Turkey’s regional position in the Syrian end-game scenario.