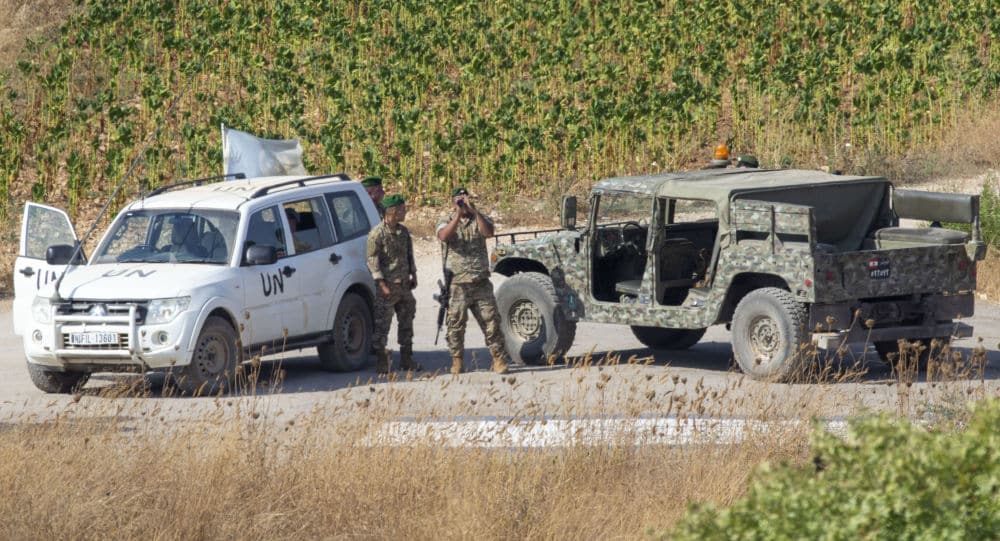 [ Editor’s Note: We had been expecting a Hezbollah retaliatory attack and a measured one also, which it was. It chose a military target in an attempt to inflict a number of casualties, similar to what Israel inflicted on Hezbollah with its recent drone assassination attack.

Under international law, Hezbollah had a right to respond. But the Israelis never recognize anyone else’s rights that they don’t like. And what they hate the most is anyone having any defense against Israeli first strikes.

They prefer to negotiate with people who are defenseless under the military power of the IDF. Its military has openly stated that it rejects the concept of balance of power. If any country they consider non-submissive were reaching parity to the IDF, it would attack it before that happened.

Israel reserves a first strike advantage to itself, while denying this to anyone else. If someone does not like this, well then they are just jew hating anti-semites, which corporate media has always published without question.

The concept of Israeli or Jewish supremacism, or whatever people would want to call this “attitude”, has never even been debated in public. Certainly no media or political platform would dare do so.

The Israelis knew that Hezbollah would respond to their attack and inflict casualties, yet they went ahead anyway on the grounds that, despite the endless invasions of Lebanon’s air space, and using it as a shield to launch attacks in Syria, Lebanon has no right to defend itself. Isn’t that special?

The vast majority of the US Congress is totally onboard this Israeli supremacist stance, in acknowledgement of the positive Israeli interference in US elections via US Jewish Lobby support of anything that the Israelis want.

Many people in US security consider this to be blatant political espionage, but so far there has been no pathway to bringing charges against those involved, as our government has been compromised to a level where such a thing is not possible without some major changes, such as, bringing in people who are more loyal to America than Israel… Jim W. Dean ]

Tensions between Israel and Lebanon began escalating last Sunday, after Beirut accused Tel Aviv of carrying out a drone attack against the media headquarters of political party and paramilitary group Hezbollah.

The Israel Defence Forces confirmed Sunday that they were firing at targets inside southern Lebanon after a volley of anti-tank missiles had targeted an Israeli military base and vehicles near the border area.

The military has ordered Israeli civilians near the border with Lebanon to remain in their homes, and said shelters would be opened in the area.

Lebanon’s al-Mayadeen television reported that Hezbollah militia had destroyed at least one Israeli military vehicle near the border area. Hezbollah said the strike “killed and wounded those inside” the vehicle, according to al-Mayadeen.

The IDF said later Sunday that it had no casualties to report on the Israeli side, while over 100 targets had been struck inside Lebanon, including via fire from a helicopter gunship and artillery units.

The office of Lebanese Prime Minister Saad Hariri issued a statement saying that the prime minister had called US Secretary of State Mike Pompeo and French President Emmanuel Macron to discuss the situation along the border with Israel.

According to the prime minister’s office, Hariri had asked “the United States and France to intervene in the face of developments at the southern border.”

Later Sunday, the Lebanese Army reported that Israel had launched over 40 missiles at targets across southern Lebanon, including the settlements of Maroun al-Ras, Aitaroun, and Yaroun. The projectiles were said to have caused fires in the area, with bombing ongoing.

Earlier in the day, prior to the anti-tank missile attack which prompted the Israeli response, Lebanese media reported that Israeli drones had entered Lebanese airspace and dropped incendiary bombs on a grove along the border, while artillery fired shells into hills in the Kfarchouba area.

These suspected attacks followed reports that the Israeli military had launched over two dozen flare bombs near Kfarchouba and other border towns including Ghajar and Shebaa on Saturday night.

The Israeli military confirmed earlier Saturday that it had called off planned military drills in another part of the country and redeployed troops to the northern border with Lebanon, including areas occupied by Israel following the 1967 Six-Day War, amid tensions with Hezbollah.

Traditionally poor relations between Israel and Lebanon took a turn for the worse last weekend after Lebanese media reported that Israel carried out a drone attack in Beirut against a Hezbollah media office, and carried out strikes along Lebanon’s border with Syria. Israel did not comment on the alleged strikes.

Further incursions into Lebanese airspace were reported on Wednesday and Friday, with the Lebanese army saying troops had fired on drones operating in the country in the Wednesday incident. In a rare admission, Israel later confirmed that its drones had been fired upon, but claimed that they completed their mission without incident.

The Lebanese government accused Tel Aviv of a “flagrant violation” of Lebanon’s sovereignty with the drone attacks, while President Michel Aoun called last weekend’s incident a “declaration of war.”

On Saturday, Hezbollah secretary general Hassan Nasrallah said the group was planning an appropriate “response” to Israel’s recent attacks, warning Tel Aviv must “pay a price” for its actions.

On Thursday, the IDF held a press conference where it accused three senior officers from Iran’s Revolutionary Guards Quds Force of working with Hezbollah to try to create high-precision guided missile factories which could be used to attack Israel.

Israel would not allow Hezbollah to “get their hands on these weapons,” the IDF said. Nasrallah blasted Israeli Prime Minister Benjamin Netanyahu on Saturday, accusing Tel Aviv of “lying” about missile factories and claiming that Netanyahu was looking for a pretext to attack Lebanon.

Last week, Netanyahu accused Iran of “acting in a broad front to produce murderous terror attacks against Israel” across a number of third countries, and said that Israel would “continue to defend its security by any means necessary.”

On Saturday, an anonymous Trump administration official defended Israel’s recent round of suspected attacks against targets across the Middle East, saying “be it Lebanon, be it Syria, be it Iraq…it’s our position that Israel is only acting because of Iran’s action.”

The last war between Israel and Lebanon took place in 2006, after two Israeli soldiers were kidnapped by Hezbollah operatives in a cross-border raid, sparking a full-blown Israeli invasion. The war killed over 1,300 people, and caused billions of dollars in damage to Lebanon’s infrastructure. A UN-brokered ceasefire put a stop to the fighting. The two countries had previously fought in 1948, 1967, and 1982-1985.