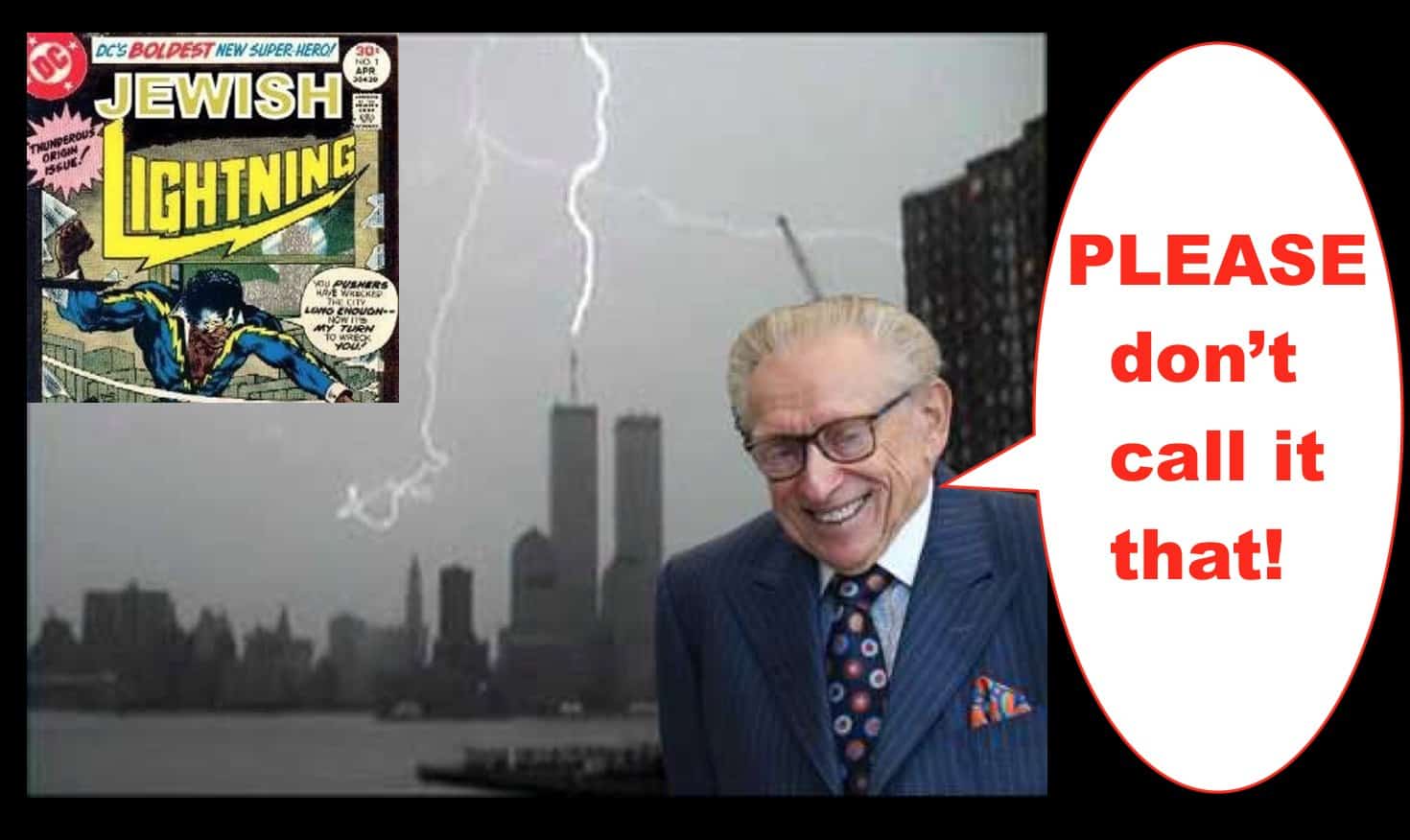 VT strives to represent diversity in all its forms: Race, color, creed, tribal affiliation, political orientation, sexual identity, I.Q., sanity, you name it, we feature writers from all ends of the spectrum. We are especially committed to combatting the scourge of anti-Semitism. That’s why we were overjoyed, nay, ecstatic, to receive this guest editorial submission from a man who, like Jeffrey Epstein, has long enjoyed a reputation as an avatar of chutzpah and a  pillar of America’s Jewish billionaire community.

The Expression “Jewish Lightning” Is Anti-Semitic!

As a Jew, as a billionaire, as a Jewish billionaire who has lost many heavily-insured white elephant buildings that happened to burn down or blow up shortly after I purchased them and doubled the insurance, I have a confession to make: Something very important is weighing heavily on my heart.

I am talking about the extremely hurtful anti-Semitic expression “Jewish lightning.” As The Jewish Daily Forward (a recipient of my philanthropic largesse) puts it:

You won’t find the phrase “Jewish lightning” in the Oxford English Dictionary. But if you go to Urban Dictionary, a site that aims to explain spoken English, you’ll find that the top definition is:“to set your house or business on fire on purpose to get the insurance money.”

The idea that Jews are able to somehow control lightning strikes is a wild anti-Semitic conspiracy theory. In the Dark Ages, before B’nai Brith and the ADL, the Jew-hating goyim had all kinds of crazy ideas: They thought Jews poisoned wells, butchered and ate Christian babies, and were responsible for the plague. Nobody believes such rubbish any more. But for some reason, the idea that Jews are in league with Satan and can call on Him to make lighting strike their over-insured buildings that they just purchased a month or two before the fortuitous lightning strike made them billions of dollars persists in our modern, rational, enlightened, almost-totally-Jew-controlled world.

In fact, Jews are the victims of disproportionate numbers of lightning strikes. Why? Because Jews are always the victims of everything and everyone. That’s why God created the Jews: to always be the victims…and to make billions of dollars off their victimhood whenever and wherever possible.

But instead of sympathizing with poor Jewish billionaires whose white elephant buildings get hit by lightning two months after purchase and doubling of insurance, anti-Semites blame the Jews for the “Jewish lightning.” This has got to stop.

Today, everyone knows that Jews took over the banking industry because they were so persecuted and oppressed that they were not even allowed to compete in other far more desirable fields, like peasant agriculture. Everyone knows that Jews have been running the top echelons of usury, human trafficking and organized crime for centuries because the anti-Semites wouldn’t let them do an honest day’s work milking cows and picking vegetables. Everyone knows the Jews own Hollywood and the mainstream media because they are not allowed to pluck feathers in chicken factories like hispanics or plumb toilets like Archie Bunker. Everyone knows that Jews are vastly overrepresented among billionaires, millionaires, and earners of six-figure incomes because they are forced to work so hard by the lazy anti-Semitic goys. The truism that Jews are ever and always the victims has been accepted everywhere…except when it comes to lightning strikes. For some reason, lightning is always the fault of “da jooooz.”

And yet for some reason we continue to use the expression “Jewish lightning.”

It’s hurtful. It’s unacceptable. It’s anti-Semitic. And it has got to stop.