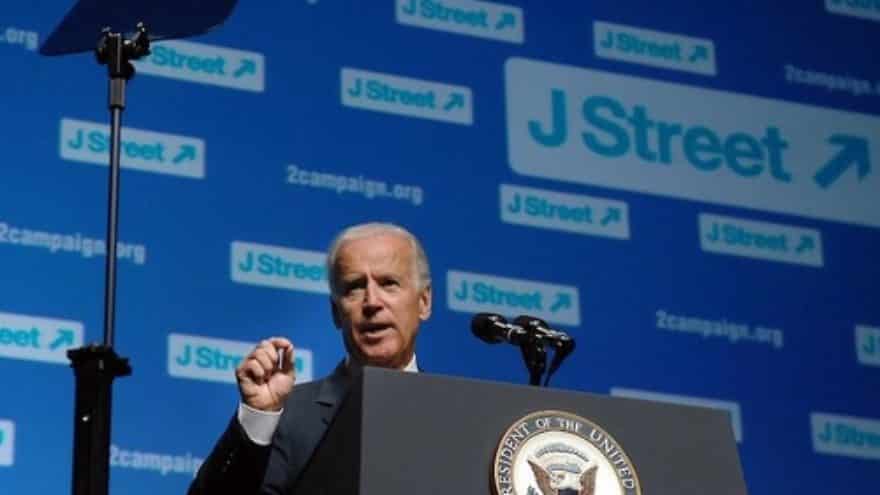 [ Editor’s Note: The Liberal J-Street Jews are onto the Trump hustle. As he portrays himself as co-President of Israel, or is it Bibi being co-President of the US, the stick in the eye politically is that most American Jews not only don’t support him, they despise him for all the right reasons.

The Likuds never publicize Israeli political divisions inside the US, preferring a tactic of acting like all Jews lend 100% support to everything and anything that Israel does, both inside Israel and here in the US, such as interfering in our elections.

What do I mean by that? One of the cornerstones of Jewish supremacism is that any and all disagreement over anything they want or have done is solely based on hatred for Jews, and therefore comes under the perverted shadow of US hate crime legislation where, without a trial, all disagreement over Israel’s policy and the Israeli lobby here is anti-semitic and subject to criminal sanctions.

Virtually all of our allegedly mainline American patriotic organizations have rolled over and played dead in the face of this frontal assault on American democracy. So, what else is new?

The Likuds see themselves as the final arbiter of how much democracy Americans are entitled to have before being “sanctioned” via the repressive legislation that Congress passes for Israel every year.

This year, the remaining 80,000 holocaust victims, defined as any Jews living in Europe during WWII regardless of what did or did not happen to them, are going to be provided a full government stipend to be taken care of in their homes until they die, so they are never “traumatized” by being in an elder care “institution”.

Congress is tripping over itself to do this, when countless vets roam the streets of American cities, relegated to second class citizenship.

And the JINSA Israel Lobby has drafted a mutual defense treaty specifically stating that if Israel, for example, were to attack Iran’s nuclear facility for any reason it wanted, and if Iran retaliated as it has promised it would, then the US would absorb the blow and take responsibility to stop it.

Congress is onboard this pathetic display of subservience, and with no blowback from constituents. When there is the first sit-in by constituents at their Congresscritters’ office over these issues, please call me quickly.

However, to save the day for American honor, along comes the J-Street Jews, which 99% of Americans have never head of because you are not supposed to know about disagreements among Jews on a major Israeli political issue, or you else might get the crazy idea that you could have the same disagreements.

That is why the Israelis don’t put a frontal on the liberal Jewish groups. It would just get them more publicity, similar to how VT is never attacked by Israelis. They know we would just offer them a full day debate, all on video, and where they only get half of the allotted time for their argument. We are batting 100% on no takers so far.

So we salute all the real American Jews out there who have the balls to stand up to the extremist Jews, who are, yes, more loyal to Israel than to the US. Israel really has no friends, and is not anyone’s friend. It just has people and countries that it is using at the moment for some purpose… Jim W. Dean ]

US President Donald Trump’s recent push to earn the backing of Jewish voters is proving to be a difficult struggle, but his hard-line support for Israel may be aimed at appealing to evangelical Christians and boost his chances of re-election in 2020, experts and politicians say.

Experts say that Trump’s goal of aligning himself squarely behind the policies of Israeli Prime Minister Benjamin Netanyahu, and attacking on those who oppose him, is to rally evangelical Christians, not Jewish voters.

“It is about pandering to his base of voters. And the base voters, the Trump voters who care about this issue are, the vast majority, Republicans, Christians and in many cases fundamentalist evangelicals,” Logan Bayroff, spokesman for J Street, a left-wing pro-Israel group in Washington, told the The Hill newspaper.

“Trump [is] expressing frustration that while the evangelical community is on board with his far-right policies … the vast majority of Jewish voters are disgusted by it, broadly disgusted by Trump [and] are going to vote against him and his party,” he added.

Evangelical Christians, a loyal voter base for Trump, believe only intense conflict in the Middle East and the gathering of Jews in Israel is a prerequisite for the return of Jesus.

“It seems pretty obvious that everything the president does is meant to cater to his base,” said US Representative Ted Deutch, a Democrat from Florida.

“Given that his base is 40 percent of the American people or less, I guess we’ll have to see if that’s a good political judgment,” he added. “But clearly there was no thought about trying to win over some of the three-quarters of the members of the Jewish community who voted against him in the last election.”

“He’s clearly in tune with making these decisions and making policies toward Israel and talking about Israel in a way that aligns with the end times, rapture ideas of a portion of his base,” Bayroff of J Street said.

“He probably doesn’t really believe it. But … I think he’s using that language because he knows it resonates with the people who already like him.”