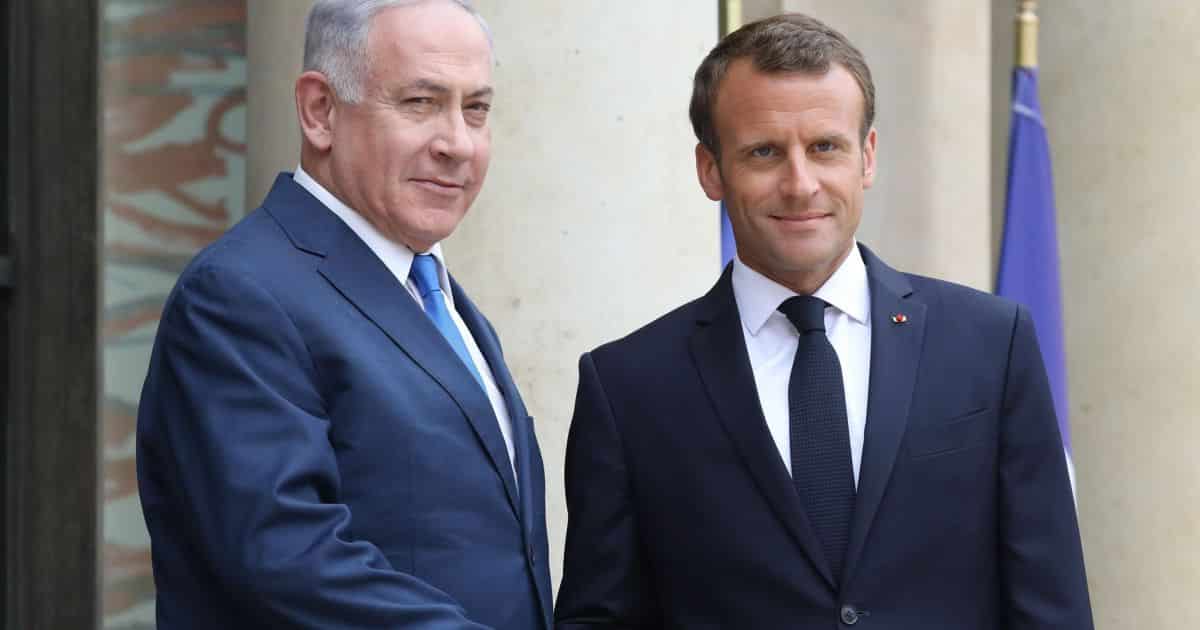 French President Emmanuel Macron must have known that Benjamin Netanyahu is having a hard time. But Macron seemed to add more pain to Netanyahu’s mental ulcer by offering Iran a $15 billion loan if they keep the nuclear deal.[1] According to Massoud Shadjareh, founder of the Islamic Human Rights Commission, this is good step forward.

But a step forward means that Benjamin Netanyahu and his puppets in the United States have to be mad, sad, and bad. Iran, says Shadjareh, wants to make a reasonable deal, but the United States and Israel have been a stumbling block from the beginning. Shadjareh declared:

“If you look at the behavior of Israelis in this episode from the beginning until now, we see that no matter what the agreement would have been, Israel would have been opposing it. Israel doesn’t want to have tranquility and peace in the area, because Israel needs conflict to sort of bring fear before its own citizens so they will unite behind his [Netanyahu’s] barbaric policies, but also to get the rest of the world supporting [those policies].”[2]

But Shadjareh is positive because France has made a good move. “It seems quite positive,” he declared.

“The voices coming out of Iran and France indicates that they are very [close] to making some sort of deal. But at the same time, I don’t know if you’ve read some of the literature coming out of Israel in the main newspapers: they’re articulating that Netanyahu is very scared of Trump doing some kind of deal. The reality is, Israel doesn’t want a deal. It seems [that the] US wants some sort of deal, because it doesn’t have another option.”[3]

Shadjareh perceived that a war with Iran would be bad for both China and Russia, and both countries are working very hard in order to not only keep the nuclear deal but to keep the United States and indeed the Israel in check. In fact, they have seen what happened to numerous countries in the Middle East. Shadjareh continued to say:

“China and Russia cannot afford to see Iran on its knees – look at Yemen; look at Syria. Iran is winning the geopolitical and even military sort of battles around [the region], and so the fact of the matter is anyone with any sort of wisdom will see that if there is a deal to be made, it needs to be made now, and failure to do so would be detrimental to the Europeans, because they are not able to move forward and continue this situation.”[4]

What we are subtly witnessing here is what Hegel calls the cunning of reason. Benjamin Netanyahu has been a bad guy since the Iraq debacle. He obviously thought that virtually every single country in the West would have allowed him to do the same thing in Iran. He was certainly dreaming because even Trump, his finest puppet in the United States, is having diabetes about waging a nuclear or military war against Iran.

But since Netanyahu is not living according to practical reason, he doesn’t realize that every evil move he takes gets him closer to his own destruction. He does not have the insight to see that opposing practical reason ultimately means opposing his own being. That’s one reason why he is always in a state of panic whenever any politician in the West seeks to open dialogue with countries like Iran. The mad man is so confused that he cannot string two coherent thoughts together. He has recently declared:

“Today we were told about another violation carried out by Iran, this time in relation to nuclear proliferation. It’s part of the aggressive actions of Iran in the international sphere and part of their attempts to carry out attacks against Israel, attempts which have not halted.”[5]

Well, King Bibi, what about Israel’s hundreds of nuclear warheads? When are you going to allow the international community for a thorough inspection? Why are you playing double standards?

You see, the man is not making any sense whatsoever. The sad news for the mad man in Tel Aviv is that practical reason will triumph in the end. In other words, Benjamin Netanyahu will either have to ally himself with practical reason or face his own destruction. He has to take his pick.