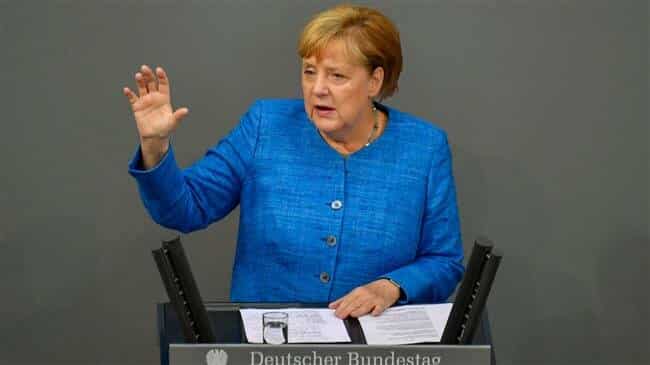 [ Editor’s Note: Merkel has been laying back in the weeds on the JCPOA fiasco, giving Macron the opportunity of stepping in to represent the EU, if such a thing is possible for anyone to really do.

I wish him well, but have a suspicion that, due to his relative youth, he has his eye on a high EU position down the road. Color me suspicious. He stated last week that Europe’s future had to include Russia as part of Europe, and that was not hype.

If you look at the map, you can see how sensible it is geographically, and it was widely reported after the recent Vladivostok convention that China continued its huge financial investment in the region.

This was hyped in the Western media as China “taking over” the region –childishly silly – when both development and defense of the region are strategically important to both countries.

The new, big gas pipeline from the Russian Arctic to China is something that will demand an air defense system, as such key energy infrastructure will be first day targets in the next big war.

Merkel has been holding steady on the Nordstream II pipeline, as it lands in her country, but she does not hold the trump card — pardon the expression. Denmark looks like it will block passage through its economic zone, or maybe blackmail Russia for a discounted long-term gas deal and a landing link. This will delay finishing the project, due to then having to reroute on a longer route.

There are pockets in the EU also threatening to block it from the top, either due to Russophobia or because the US had paid them for it, as Trump thinks he can force the EU to buy more expensive US LNG, when the average European price for gas is dropping due to over supply and growing prevalence of pipelines that cost less to ship long term and are not subject to offensive naval blockade.

The international gangsters will continue their energy gang wars at the expense of the rest of us, as they work to keep prices high on something that should be a modest cost, due to global oversupply.

Remember the con floated way back, when they were pushing that we would be running out of oil? That was not a mistake on their part, just hyped to maintain the prices, along with the oil stocks. Economic treason is not against the law in the US… Jim W. Dean ]

German Chancellor Angela Merkel says Europe has made its choice regarding the historic 2015 nuclear agreement with Iran — which the United States has been attempting to sabotage — and will honor the agreement.

Officially known as the Joint Comprehensive Plan of Action (JCPOA), the deal was originally struck between Iran on the one side and Germany, France, the United Kingdom, China, Russia, and the US on the other.

Washington, however, breached and then unilaterally pulled out of the deal in 2018. It has since been trying to stymie the agreement by imposing sanctions on Iran and its international trade partners, including Europe.

Those attempts by the US have ratcheted up tensions with Iran, which has stopped complying with some of its obligations under the deal, arguing that Europe is failing to make the deal work for Iran economically as planned.

“Step by step, we will keep trying to find solutions with Iran that prevent an escalation of tensions in a globally sensitive region. That’s our job,” Chancellor Merkel said on Wednesday.

The JCPOA has been ratified in the form of a United Nations Security Council resolution, making both the US’s withdrawal and its imposition of the sanctions illegal.

Despite recurrent promises by Europe to offset the adverse effects of American actions on its implementation of the deal, Iran has of yet been dissatisfied, insisting that words should be followed up by real action.

Europe is contractually bound to guarantee Tehran’s business interests, something it stopped doing after Washington imposed its bans.

European companies started leaving the Iranian market — some of them even before the American sanctions had taken effect — for fear of US sanctions and/or losing transactions with the US.