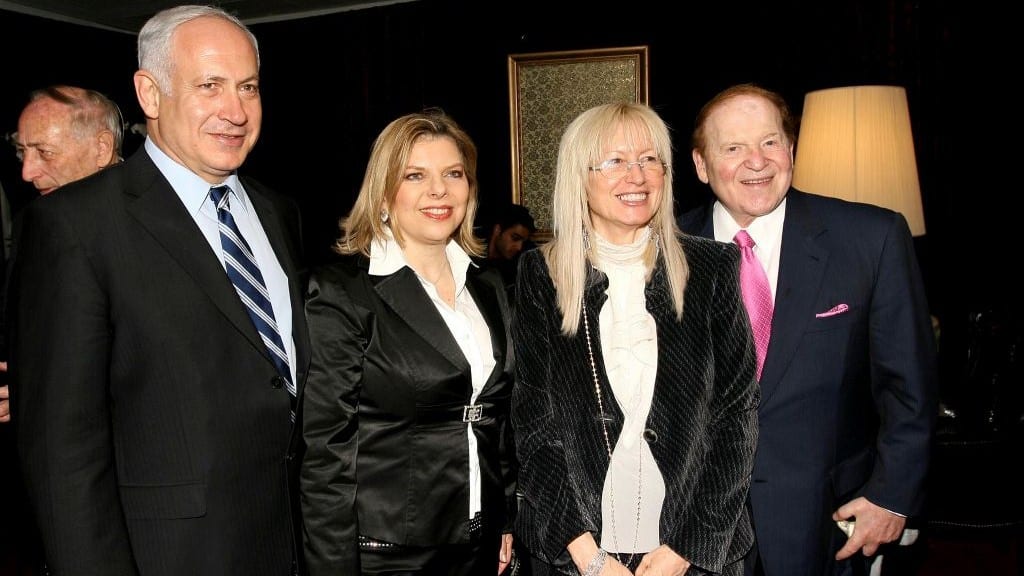 This day has been a long time in coming but was anticipated by Henry Kissinger, among others. The time to “uninvent” the invented state of Israel, the criminal, genocidal, apartheid state of Israel, has arrived.

As President Donald Trump carefully examines the details of the Mossad-CIA-FBI Maxwell-Epstein pedophilia and murderous pedophilia and Satanic Ritual Abuse (SRA) blackmail entrapment operation (of which there are 49+ replicas across the USA), and considers what he knows about the Zionist planning and execution of 9/11 under the protective cover of Dick Cheney beforehand and Robert Mueller after the fact, he is well-positioned to conclude, as I have concluded, that the time has come to withdraw all US support for Israel, and to join Iran in arranging for the restoration of Palestine to the Palestinians.

Sheldon Adelson and his wife Miriam Adelson appear to have reached the same conclusion, along with 75% if not more of all decent Jews who are also decent assimilated US citizens.

My own enlightenment with respect to the difference between the Zionist criminal genocidal apartheid state of Israel and the decent Jews with whom I and others have dealt with over a lifetime was begun when the Zionists (not the Jews) attacked #UNRIG, me, and Dr. Cynthia McKinney six ways in ninety days. My investigation concluded that all six paths led to the Anti-Defamation League (ADL), the Zionist secret police. I have a federal lawsuit against one of the six fronts for the ADL and am looking forward to both full discovery and a jury trial. Others have settled with me, MeetUp remains to be  taken down.   The story is told here:

Then I considered three books, in the order below:

Review: Against Our Better Judgment – The Hidden History of How the U.S. Was Used to Create Israel by Alison Weir

I already knew that Israel and the Zionists (never to be confused with Jews) was a parasite, a cancer within the USA, a parasite and cancer killing our economy, our government, and our society, but it was not until I had my own personal experience with these Zionist criminals, and then expanded my reading, that I understood that the expulsion of Zionist Israel from the USA and from Palestine is an existential issue for both world peace and world prosperity.

48 Zionist Strikes (Zionism is Not Judaism)

The President knows that it is the Zionists who have back doors into all US communications systems and computers — including the secret ones; that it was the Zionists who planted most of the electronic devices in the White House that the Trump Administration very judiciously discovered and removed early on; and that it is the Zionists that have recently been caught with a full range of communications interception devices planted around the White House as well as Congress.

It is the Zionists that did the USS Liberty and 9/11.

It is the Zionists that have been stealing intellectual property and doing insider trading based on their complete penetration of all US communications and computing, a crime that has been facilitated by traitors within NSA and DHS and elsewhere.

The Day of Atonement is an important one. First must come the day of expulsion.  Mr. President, if you are to win the Mother of All Landslides you have to do three things as shown on the chart below, and then in your second term, apply all nine methods so as to be the greatest President ever.

America First means not Israel First. This is not negotiable going into 2020.

Bloomberg: The Netanyahu Show Is Finally Fizzling Out: A rocket attack. John Bolton is fired. A surveillance law fails. Sheldon Adelson calls his wife “crazy.” And next week could be even worse.

ROBERT STEELE: In passing, given the importance of Veterans Today and the possibility that this article might actually be brought to the attention of the Adelsons, I will say this clearly: support our President in expelling the Zionist parasite from the USA and  from Palestine, and I will commit to a Jewish President by 2028. A legitimate all-American Jewish President — perhaps a woman — who places America First while respecting and protecting the Jewish faith — and all other faiths — in every clime and place. Marianne Williamson has blown it — her small shallow staff was not able to see the #UNRIG panorama that would have catapulted Williamson to the center.

Author Bio
Robert David Steele
RobertDavidSteele.com
Robert David Steele is the conceptualizer of integrated election reform (#UNRIG) and the integration of holistic analytics, true cost economics, and Open Source Everything Engineering (OSEE) such that we can achieve a prosperous world at peace at 10-20% the cost of the failed Western economic model burdened by banks and lawyers.
A former US spy and co-founder of the Marine Corps Intelligence Activity, he is today the Chief Enabling Officer (CeO) of Earth Intelligence Network, a 501c3 and now also CeO of Open Source Everything (OSE Inc.). He continues his education with non-fiction reading, posting over 2,500 reviews across 98 categories; his hobbies include off-shore sailing and racketball.
Subscribe free to his blog at PhiBetaIota.net
[email protected]