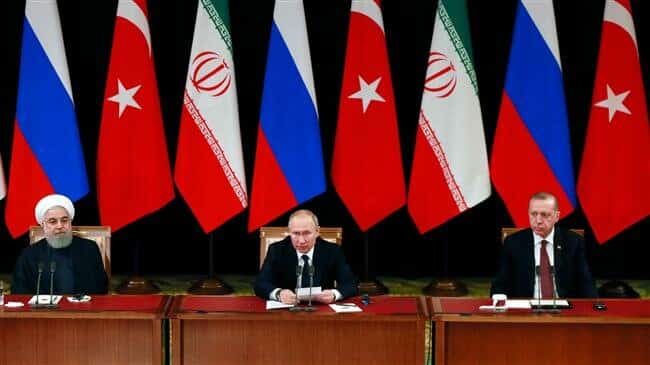 Iranian President Hassan Rouhani will attend a trilateral meeting in Ankara with Vladimir Putin of Russia and Recep Tayyip Erdogan of Turkey in order to discuss a political resolution to the Syria crisis.

According to the Iranian president’s office, Rouhani will leave Tehran for the Turkish capital on Sunday, and will take part and deliver a speech at the trilateral meeting on Monday, September 16.

The three leaders will discuss the latest developments in Syria, particularly the issue of Idlib province in the north of the Arab country, during the trilateral summit, both Erdogan and a senior Kremlin aide announced on Friday.

Erdogan said after Friday prayers that he would discuss recent developments in Idlib at the trilateral summit with the Russian and Iranian leaders.

“We will continue to discuss developments in Idlib, including observation posts and the fight against terror organizations,” the Turkish president said.

The Russian aide, Yuri Ushakov, said the three leaders will confer on the “difficult situation” in Idlib.

Ankara and Moscow agreed last September to turn Idlib and parts of Hama province into a de-escalation zone where acts of aggression are expressly prohibited.

Russia and Turkey say they have reached an agreement on borders of a demilitarized zone in Syria’s province of Idlib.

According to Esmaeili, Rouhani will also hold separate bilateral meetings with Putin and Erdogan on the sidelines of the summit.

The meeting will be held within the framework of the Astana Process, an initiative by Iran, Russia, and Turkey which mediate peace negotiations between representatives from the Damascus government and opposition groups in a series of rounds held in the Kazakh capital Nur-Sultan (formerly Astana) and other places since January 2017.

The talks, which are collectively referred to as the Astana peace process, have so far helped significantly reduce the violence gripping the Arab country by establishing four de-escalation zones there. They have also paved the way for the formation of a Constitutional Committee.

The parallel UN-backed peace process in Geneva, however, has failed to deliver much.