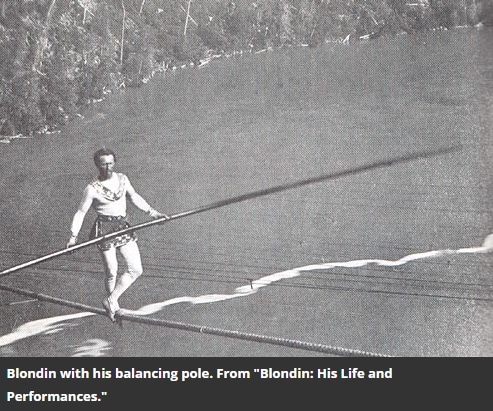 Health Editor’s Note: This article was written in 2011, but when I discovered it, I just knew you all would join me in admiration for the awesomeness of someone who crossed Niagara Falls, in inventive and positively crazy ways, 300 times on a thin cable….Carol

The Daredevil of Niagara Falls

New York Governor Andrew Cuomo recently signed legislation permitting Nik Wallenda—self-proclaimed “King of the High Wire” and descendant of the legendary Flying Wallendas—to cross Niagara Falls on a tightrope. Wallenda plans to run a cable, two inches thick and 2200 feet long, between two cranes raised 13 feet from the ground. To train, he will take wire walks over water near his Florida home while a caravan of airboats swarm around him, blasting winds up to 78 miles per hour to approximate the winds and spray of the falls. For the real thing, a rescue helicopter will hover nearby. “Worse-case scenario,” Wallenda said, “I sit down on the wire, the helicopter swoops in, I hook on and they get me out of there. I look goofy, but nobody gets hurt.”

History’s most famous tightrope walker (or “ropedancer” or “funambulist,” in 19th century parlance) performed without the luxury of such assurances. During the winter of 1858, a 34-year-old French acrobat named Jean François Gravelet, better known as Monsieur Charles Blondin, traveled to Niagara Falls hoping to become the first person to cross the “boiling cataract.”