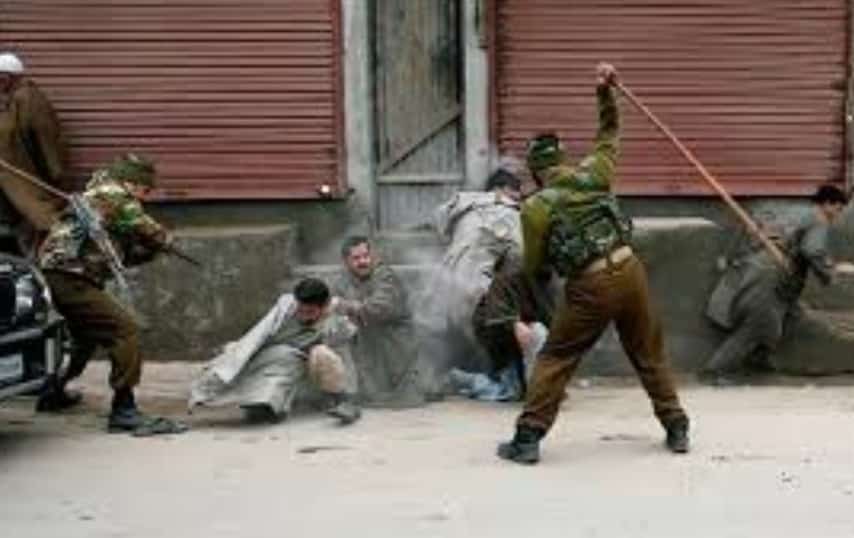 Since 1947, in order to maintain its illegal control, India has continued its repressive regime in the Indian Occupied Kashmir (IOK) through various machinations. Especially, since 1989, Indian army and paramilitary forces have been committing gross human rights abuses such as crackdowns, curfews, illegal detentions, massacre, targeted killings, extrajudicial killings, sieges, burning the houses, torture, disappearances, rape, breaking the legs, molestation of Muslim women and killing of persons through fake encounters.

But, Indian forces have broken all previous records of gross human rights abuses since August 5, 2019 when Indian extremist Prime Minister Narendra Modi’s government ended special status of the Jummu and Kashmir by abolishing articles 35A and 370 of the Constitution to turn Muslim majority into minority in the Indian Controlled Kashmir.

More than 40 days have been passed. But, Indian forces have continued lockdown and curfew in the IOK. More restrictions have been imposed in wake of shortage of foods and even medicines for the patients. In order to hide human rights violations, communication services have been cut off from the world and foreign journalists are not allowed to enter that region Besides, Indian extremist rulers are also escalating tensions with Pakistan to divert attention from the drastic situation of the Indian Controlled Kashmir, and have continued shelling inside Pakistani side of Kashmir.

New Delhi which already had 500,000 troops in the Indian Held Kashmir sent almost 300000 extra troops. Despite, India’s excessive deployment of troops in the Kashmir region, expulsion of Hindu pilgrims, tourists, closure of educational institutions and arrest of the Kashmiri leaders and the pellet guns shots, Kashmiris have accelerated the war of liberation, being waged for their right of self-determination, which was also recgonised by the United Nations resolutions.

Human rights groups and even Western media have repeatedly condemned Indian illegal measures and human rights violations which continue unabated in the Indian Occupied Kashmir. Some references are notable in this respect.

The Independent wrote on August 13, 2019: “Kashmir’s tight security and communications lockdown remained in place…as reports emerged of daily essentials running low. Restrictions on almost all movement…were strictly enforced…With internet and phone lines still cut off…the valley has become the setting for all-out information warfare….soldiers stopping vehicles in the centre of Srinagar, causing a traffic jam just as a military surveillance drone flew over…The network of barbed passageways was unprecedented…entire Srinagar city has been knitted in razor wire to seek our silence and obedience…closure of mosques curtailed the religious freedoms of Kashmiri Muslims…Restrictions and curtailment of this fundamental religious freedom of millions of Kashmiri Muslims constitutes a serious violation of applicable international human rights law, to which India is a party.”

The New York Times wrote on August 10, 2019: “On the streets of Srinagar, Kashmir’s biggest city, security officers tied black bandannas over their faces, grabbed their guns and took positions behind checkpoints. People glanced out the windows of their homes, afraid to step outside. Many were cutting back on meals and getting hungry….Shops were shut. A.T.M.s had run dry…internet, mobile phones, even landlines…remained severed, rendering millions of people incommunicado…life under lockdown in Kashmir and found a population that felt besieged…frightened and…Several residents said they had been beaten up by security forces for simply trying to buy necessities like milk. Many Kashmiris see India as an oppressive and foreign ruler. Tens of thousands of troops from the Indian Army, the Central Reserve Police Force (a paramilitary unit) and the Kashmiri State police have been deployed in just about every corner of the valley. In some villages, even remote ones, a soldier was posted outside the gate of each family’s home….The lockdown’s effects are visible everywhere….Parks are deserted. Baby food is running out…Many doctors couldn’t get to work.…Many Kashmiris fear that Mr. Modi’s sweeping decision, which also wiped away a decades-old provision that gave Kashmiris special land ownership rights, will encourage millions of Hindu migrants from India to move into the valley…Kashmiris fear they will be turned into a minority in their own land.”

On August 29, this year, BBC pointed out: “Unprecedented restrictions have put Kashmir into a state of lockdown…In one village the residents said…Two brothers were woken up and taken to an outside area where nearly a dozen other men from the village had been gathered…They kicked us…gave us electric shocks, beat us with cables…we screamed, they sealed our mouth with mud…We told them we are innocent…they did not listen to us. I told them don’t beat us, just shoot us. I was asking God to take me, because the torture was unbearable.”

Addressing the 42nd session of the United Nations Human Rights Council (UNHR) in Geneva on September 10, this year, Pakistan’s Foreign Minister Shah Mahmood Quereshi urged the UNHRC “to constitute a commission of inquiry for an investigation into blatant and grave human rights violations in occupied Kashmir”.

Quereshi elaborated: “The basic and inalienable human rights of Kashmiri people are being trampled with impunity by India…over 6,000 people…have been arrested, without due process of law. Many of them have been forcibly shipped to jails all over India, under draconian laws operative in Indian Occupied Jammu & Kashmir…New Delhi has turned Kashmir into the largest prison…India can once again resort to false-flag operations, and use the bogey of terrorism to divert international attention from atrocities in occupied Kashmir…illegal occupation of Muslim-majority Kashmir region can drive the two nuclear-armed countries into an accidental war”.

It is mentionable that Pakistan achieved a biggest success when 50 countries supported Pakistan’s stance on Indian Held Kashmir in a joint statement delivered at the UNHR in Geneva on September 10, 2019. The joint statement said: “It shares the concern expressed by the High Commissioner for Human Rights Michelle Bachelet regarding the impact of recent actions on the human rights of Kashmiris…the UN Secretary-General Antonio Guterres, the Office of the High Commissioner for Human Rights [OHCHR], UN Special Procedures in their joint press release of 22 August 2019, civil society organizations and international media have repeatedly expressed serious concerns about the unprecedented restrictions and on the continuous curfew imposed since fifth of last month, curbing of fundamental freedoms, communications blackout and reports of wide spread torture, extrajudicial killings, arbitrary arrests, molestation of women, and enforced disappearances”.

It quoted UN Secretary-General António Guterres statement on 8th of last month that said: “The position of the United Nations on this region is governed by the Charter of the United Nations and applicable Security Council resolutions”. This position of the UN Secretary-General has also been corroborated by OHCHR‘s Kashmir Reports.

It added: “Consistent with the UN Charter, Security Council resolutions, and human rights standards and international law, the international community should ask for…Respect and protection of fundamental human rights of the people of Indian occupied Jammu and Kashmir…Immediate lifting of curfew, ending the communications shutdown and release of arbitrarily detained people… Immediate halt to the excessive use of force, especially the use of pellet guns; access of human rights organizations and international media…Implementation of the recommendations of OHCHR’s Kashmir Reports including the establishment of a UN Commission of Inquiry to investigate egregious human rights violations”. It also supported a peaceful resolution of the Jammu and Kashmir dispute through the implementation of the UNSC resolutions.

Notably, a majority of the world’s leaders’ statements regarding the situation of the IOK, Western media, including human rights groups have been giving much coverage to India’s lockdown and Modi’s illegitimate moves by indicating the sufferings of the Kashmiris. But, Indian security forces have continued human rights abuses in the IOK.

Pakistan’s Prime Minister Imran Khan have repeatedly stated the inaction by the international community, particularly the West’s major powers who have financial interests in India could lead to conventional war which could be culminated into nuclear war between the two countries.  Especially, on August 15, 2019, Prime Minister Khan has warned the international community of “severe repercussions and reactions”, if they “silently witness another Srebrenica-type massacre & ethnic cleansing of Muslims in IOK”.

In his interview with Russian TV Channel RT on September 13, 2019, PM Imran Khan once again pointed out that the Indo-Pakistani standoff took a turn for the worse after New Delhi revoked the decades old autonomy of the part of disputed Kashmir it controls. Khan urged the world community to help preventing the conflict from spiraling into “nuclear  hotspot” with “unimaginable” consequences. He said that he was disappointed by the lackluster international response to the Kashmir crisis and explained: “Sadly, I would have expected the world to react much more than it has…some states may be unwilling to disrupt trade with India…I feel that [to the world community] markets, trade, material gains–I’m sad to say–are much more important than human beings”.

Earlier, in response to the threat of nuclear war by Indian Defence Rajnath Singh, addressing a press conference, Pakistan’s army’s media wing-the DG of Inter-Services Public Relations (ISPR), Maj-Gen. Asif Ghafoor stated on September 4, this year: “There is no policy of no first use of strategic capability…use of nuclear capability is political…no solution to the Kashmir issue less than right to self-determination of Kashmir is acceptable to Pakistan…Pakistan is ready to go to any extent for Kashmir…war would become an option by compulsion and not by choice if other elements do not succeed in stopping brutalities in Held Kashmir.”

Although the US President Donald Trump reiterated his offer to mediate between India and Pakistan on September 9, 2019, yet he is only fulfilling formality, because America remains determined to make India superpower in Asia to counter China, while playing double game in the region.

Undoubtedly, as the major countries like the UK, France, the US, Germany, including some other Western states are not taking practical actions against New Delhi which could also entail economic sanctions that gross human rights abuses in the Indian Occupied Kashmir continue unabated.