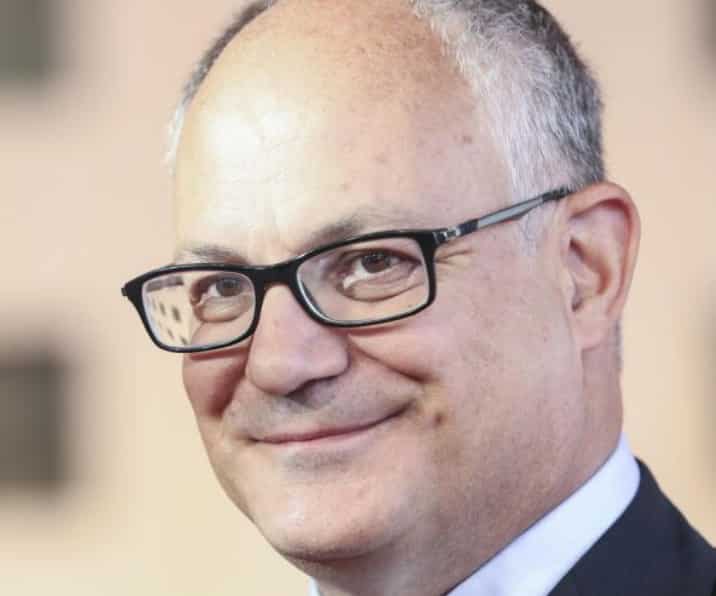 “The appointment of Roberto Gualtieri as Minister of the Economy would be good for Europe and for Italy”. The former general director of the IMF and current president of the ECB, Christine Lagarde, speaking today to the MEPs of the Economic Affairs Committee, has spent flattering words towards the Democrat Party MEP, who was officially chosen as the new Economy Minister in the Government Count Count of the fragile M5S-PD alliance .

Together with her, surely she will also celebrate George Soros, the Hungarian-American financier of Zionist origin. Already because Gualtieri was one of the 14 Italians on the list of 226 MEPs filed in September 2014 by the Kumquat Consult agency in Brussels on behalf of the Open Society European Policy Institute.

The card dedicated to Roberto Gualtieri in the study carried out for the George Soros Open Society
An exceptional work of intelligence and analysis in which all members of the EU Parliament deemed trustworthy or reliable to collaborate with Soros have been monitored for parliamentary seniority, essential political curriculum, areas of competence in the EU, geopolitical areas of operation, interests of social activism , phone numbers, e-mail and Twitter account.

ALL POLITICIANS OF THE PLUTARCA SOROS

Among them there is also the future Minister of the Economy who will take the place of the outgoing Giovanni Tria at the MEF (Ministry of Economy and Finance) and has already received the approval of the n. 1 of the Euroburocrats of Brussels, the director Lagarde who will shortly receive deliveries from Mario Draghi at the head of the ECB.

It is the response of pride and arrogance of the extremist Europeanists to the regurgitations of Sovereignism and Populism launched by the Italians in the March 4, 2018 elections that voted Lega and M5S for a change. It is the proof that the meetings of Luigi Di Maio in London with the bankers of the City and the compliant policies of the pentastellatos towards high finance led the 5 Star Movement to take the step without return towards the mess with the Democratic Party in favor of systemic globalists .

Tomorrow morning at 10.00 there will be the oath of the new executive, but meanwhile the premier Giuseppe Conte communicates the list of ministers (10 to the 5 Stars, 9 to the Pd, 1 technician and 1 to LeU). The yellow-red government, therefore, is ready to go, after the crisis triggered by Matteo Salvini in early August. But he will have to deal with a very large amount of money in the Senate where the pentastellato Gianluigi Paragone is leading the branch that could count on at least 9 rebel grillini, assuming that no more are added since almost all the outgoing ministers of the 5 Stellis have not been reconfirmed.

The only exception of Di Maio, sent to the Foreign countries to wander around the world and leave the peaceful Palazzo Chigi, and Alfonso Bonafede, guarantor of the status quo to the Ministry of Justice in the year of the most serious scandals of the togas that forced even the Attorney General of the Court of Cassation for shady intrigues in the Superior Council of the Magistracy with the prosecutor Luca Palamara, investigated by the Prosecutor of Perugia for corruption in judicial proceedings and suspended from functions without salary .

DIRTY TOGAS: IN THE TROUBLES ALSO THE GENERAL ATTORNEY

In this wobbly and scorching climate, the appointment of Gualtieri, prominent figures of the so-called Soros list, is very disconcerting, as much an expert of history as little of economy. Romano, born in 1966, is a professor of contemporary history at the University of Rome “La Sapienza”. Deputy Director of the Gramsci Institute Foundation, he began his political career in the early 2000s. Member of the Roman secretariat of the Left Democrats between 2001 and 2006, in October 2006 he was one of the three speakers at the Orvieto conference that kicked off to the construction of the new party and subsequently became part of the commission of essays appointed by Romano Prodi who drafted the “manifesto” for the Democratic Party.

Author of numerous books and articles on Italian and international history of the twentieth century, great expert of the process of European integration, he is MEP for the Democratic Party from three legislatures. He entered Strasbourg in 2009 and was re-elected twice. President of the Committee on Economic and Monetary Affairs of the European Parliament (a post taken on his second term and confirmed in 2019), he has also been Vice-President of the Socialist and Democratic Group (S&D) since July.

“Among the negotiators on behalf of the European Parliament of the Fiscal Compact – the treaty that forced Italy to include a balanced budget in the Constitution – in 2016 Gualtieri was included by the Politico magazine in the list of the eight most influential European deputies . His appointment as Minister of the MEF is a way to bring Italy closer to Europe, where Gualtieri is very well known and appreciated. His first commitment will be the negotiation with the European Union on the next budget maneuver, with which the Count-bis will be called to avoid the VAT increase and the opening of an infringement procedure for excessive deficit »writes Il Newspaper that publishes the complete list of future ministers.

Note the incredible career of the Rutellian Spadafora who after jumping from the Margherita to the Udeur and then to the 5 Star Movement now as Secretary of the Count 1 becomes Minister in a government Conte bis blatantly red traction PD.

The former Prefect of Milan, Luciana Lamorgese, to the Mayors of the League on anti-migrant policies, is the new Minister of the Interior. The government of the Count Bis was born in the sign of “discontinuity” above all in the strategic Dicastery of the Interior entrusted with Luciana Lamorgese, the former prefect “do-goodist” of Milan who canceled some orders of the Lombard Mayors of the League against illegal immigration and was among the first to challenge the Security Decree wanted by his predecessor, the Viminale, Matteo Salvini.

“We see mayors who do not always play their part and I tell them that it is important to accept diversity, which is wealth and proceed with integration” commented Lamorgese regardless of phenomena such as the Nigerian Mafia capable of alerting the Anti-Mafia Investigative Directorate or the exploitation of the many illegal immigrants who are denied asylum for humanitarian reasons due to the lack of requirements: because they do not flee from war or famine.