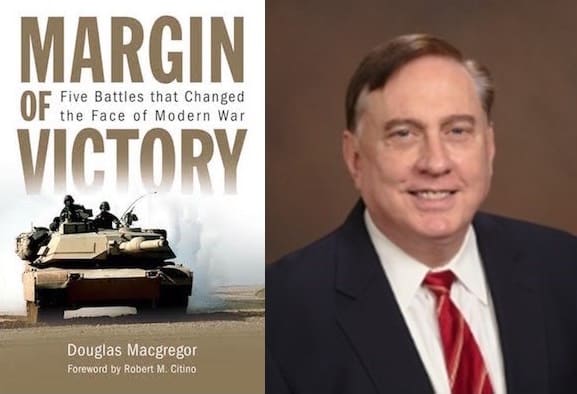 Shared in the public interest. I know Doug Macgregor and consider him one of the very few individuals who invariably integrates intelligence, integrity, and imagination in public service and without falling prey to the agendas of the Deep State and foreign powers as do most others in Washington. My review of his book Margin of Victory: Five Battles That Changes the Face of Modern War makes it clear he would be a superb National Security Advisor because he understands that we cannot win wars today (not even against Iraq or Iran or Afghanistan’s tribes) and that it will take us 20 years to create a military that *can* win wars by changing most of what we do now.

Wilkerson, in a new interview with host Aaron Maté at Push Back, puts the odds of Trump choosing Macgregor, who tends to recommend non-interventionist foreign policy actions much like those supported at times by Trump, at “50/50.” But, says Wilkerson, “if there is a personal interview, Trump talking to Doug and Doug to Trump, I’d raise that to 70/30, and I’d bet on it.”

Explaining his conclusion, Wilkerson states Macgregor is “very persuasive” and points to a speech Macgregor presented at an August 24 Ron Paul Institute conference near Washington, DC. Anyone who saw Macgregor’s speech at the conference, says Wilkerson, would understand why it looks like Macgregor would be a good replacement for Bolton.

You can watch that speech by Macgregor at the Ron Paul Institute conference here: