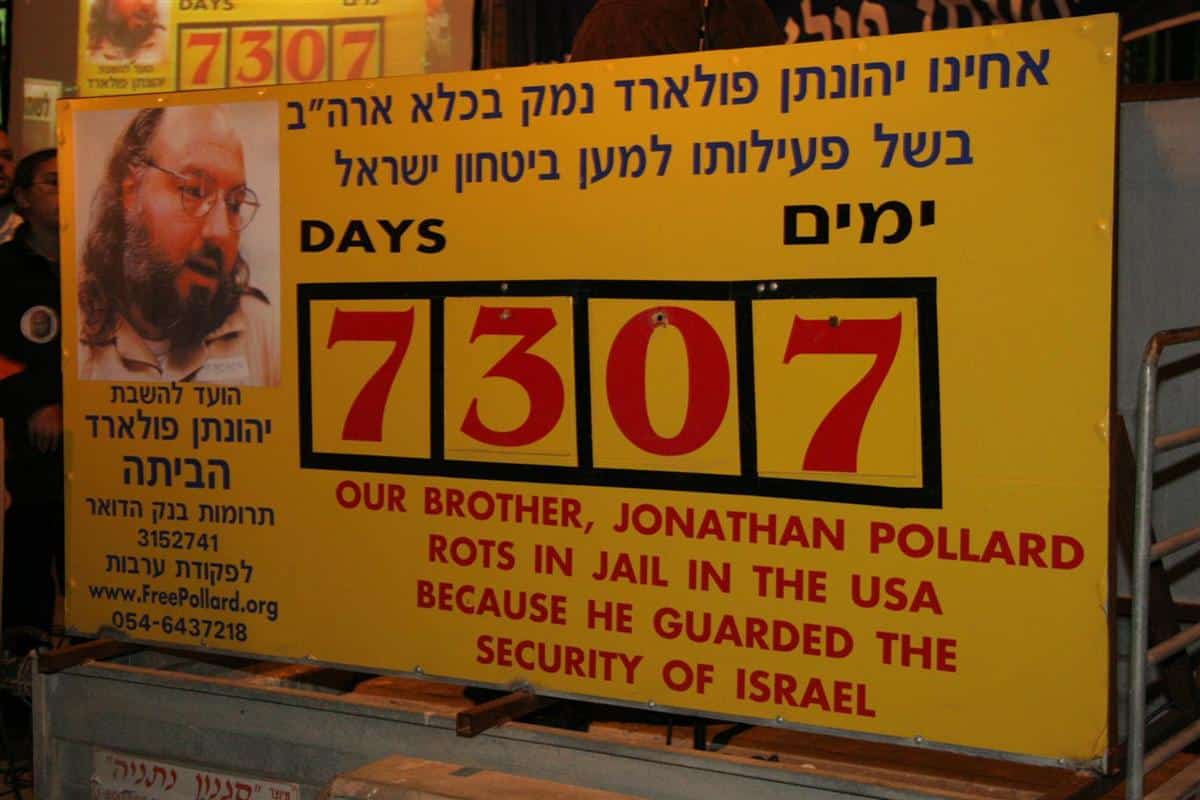 …by Phil Giraldi, for The Unz Review

[ Editor’s Note: Phil has a good review on an old subject, what I describe as the Israeli full-spectrum intelligence operation against the US that has gone on for a long long time and that most of the public is still generally unaware of.

VT has written about this for years, and all loyal internet-savvy people are aware of the scale of the problem. But apparently “knowing about” it has never had any effect on being able to do anything about it.

The fix is in with Congress, for sure. And there are problems at the Justice Department, as the FBI does not initiate investigations. The Justice Dept. assigns cases to them. Hence you can image how much interest the Zionists have always had on who the Attorney General is, and even down to the US attorneys.

VT was the only one to cover the damage that Pollard really did, like getting the CIA’s entire Eastern European spy list for Israel, who then turned it over to the Soviets at the time; a thousand agents, with decades of work, were rounded up and eliminated.

Pollard turn over the code our subs used to give their positions, and the codes for the nuclear missile commands. Only the bomber command was not compromised. We found out via some very bitter people, oldtimers, that were in a position to know.

As for any response from what we published, officially it was zero, the media included. No one wanted to know anything about it or get put in a position where they would be asked to do something.

The media is a partner in this scourge. Gone are the days when a big newspaper investigative reporter could run a series of reports on the breadth and depth of Israeli espionage here.

Politico did the original story that triggered Phil’s new piece. He has seen all of this from A to Z, as have we. When it will end? Never, if it does not become a big political and national security issue, which to date it has not. Whose fault is that? … Jim W. Dean ]

Here we go again! Israel is caught red handed spying against the United States and everyone in Congress is silent, as are nearly all the mainstream media which failed to report the story.

And the federal government itself, quick to persecute a Russian woman who tried to join the NRA, concedes that the White House and Justice Department have done absolutely nothing to either rebuke or punish the Israeli perpetrators.

One senior intelligence official commented that “I’m not aware of any accountability at all.”

Only President Donald Trump, predictably, had something so say in his usual personalized fashion, which was that the report was “hard to believe,” that “I don’t think the Israelis were spying on us. My relationship with Israel has been great…Anything is possible but I don’t believe it.”

Ironically, the placement of technical surveillance devices by Israel was clearly intended to target cellphone communications to and from the Trump White House. As the president frequently chats with top aides and friends on non-secure phones, the operation sought to pick up conversations involving Trump with the expectation that the security-averse president would say things off the record that might be considered top secret.

The Politico report, which is sourced to top intelligence and security officials, details how “miniature surveillance devices” referred to as “Stingrays” imitate regular cell phone towers to fool phones being used nearby into providing information on their locations and identities.

According to the article, the devices are referred to by technicians as “international mobile subscriber identity-catchers or IMSI-catchers, they also can capture the contents of calls and data use.”

Over one year ago, government security agencies discovered the electronic footprints that indicated the presence of the surveillance devices around Washington including near the White House.

Forensic analysis involved dismantling the devices to let them “tell you a little about their history, where the parts and pieces come from, how old are they, who had access to them, and that will help get you to what the origins are.” One source observed afterwards that “It was pretty clear that the Israelis were responsible.”

The Israelis are characteristically extremely aggressive in their intelligence gathering operations, particularly in targeting the United States, even though Trump has done the Netanyahu government many favors.

These have included moving the U.S. Embassy to Jerusalem, withdrawing from the nuclear deal and sanctioning Iran, recognizing Israeli sovereignty over the Golan Heights, and looking the other way as Israel expands its settlements and regularly bombs Syria and Lebanon.

Israel’s high-risk spying is legendary, but the notion that it is particularly good at it is, like everything having to do with the Jewish state, much overrated. Mossad has been caught in flagrante numerous times. In 2010, an undercover Mossad hit team was caught on 30 minutes of surveillance video as it wandered through a luxury Dubai hotel where it had gone to kill a leading Hamas official.

The fact is that Israel conducts espionage and influence operations against the United States more aggressively than any other “friendly” country, including tapping White House phones used by Bill Clinton to speak with Monica Lewinski. Israeli “experts” regularly provide alarmist and inaccurate private briefings for American Senators on Capitol Hill.

Israel also constantly manufactures pretexts to draw the U.S. into new conflicts in the Middle East, starting with the Lavon Affair in Alexandria Egypt in 1954 and including the false flag attack on the U.S.S. Liberty in 1967. In short, Israel has no reluctance to use its enormous political and media clout in the U.S. to pressure successive administrations to conform to its own foreign and security policy views.

The persistent spying, no matter what Netanyahu claims, is a very good reason why Israel should not receive billions of dollars in military assistance annually. Starting in 1957, Israel’s friends stole enriched uranium from a Pennsylvania refinery (reprocessing facility…JD) to create a nuclear arsenal.

More recently we have learned how Arnon Milchan, a Hollywood producer/billionaire born in Israel, arranged the illegal purchase of 800 krytron triggers to use in the production of nuclear weapons. The operation also involved current Israeli Prime Minister Netanyahu.

The existence of a large scale Israeli spying effort at the time of 9/11 has been widely reported, incorporating Israeli companies in New Jersey and Florida as well as hundreds of “art students” nationwide. Five “dancing” Israelis from one of the companies were observed celebrating against the backdrop of the twin towers going down.

While it is often observed that everyone spies on everyone else, espionage is a high-risk business, particularly when spying on friends. Israel, relying on Washington for billions of dollars and also for political cover in international fora like the United Nations, does not spy discreetly, largely because it knows that few in Washington will seek to hold it accountable.

Israel, where government and business work hand in hand, has obtained significant advantage by systematically stealing American technology with both military and civilian applications.

The U.S. developed technology is then reverse engineered and used by the Israelis to support their own exports. Sometimes, when the technology is military in nature and winds up in the hands of an adversary, the consequences can be serious. Israel has sold advanced weapons systems to China that incorporate technology developed by American companies.

The reality of Israeli large-scale spying in the United States is indisputable. One might cite Jonathan Pollard, who stole more highly classified information than any spy in history. And then there were Ben-Ami Kadish, Stuart Nozette and Larry Franklin, other spies for Israel who have been caught and tried, but they are only the tip of the iceberg.

These collection activities are primarily directed at obtaining information on military systems and advanced computing applications that can be used in Israel’s sizable armaments industry.” It adds that Israel recruits spies, uses electronic methods, and carries out computer intrusion to gain the information.

A 1996 Defense Investigative Service report noted that Israel has great success stealing technology by exploiting the numerous co-production projects that it has with the Pentagon. It says “Placing Israeli nationals in key industries …is a technique utilized with great success.”

The GAO has concluded that Israel “conducts the most aggressive espionage operation against the United States of any U.S. ally.” In June 2006, a Pentagon administrative judge ruled against a difficult to even imagine appeal by an Israeli denied a security clearance, saying that “The Israeli government is actively engaged in military and industrial espionage in the United States.”

FBI counter intelligence officer John Cole has also reported how many cases of Israeli espionage are dropped under orders from the Justice Department., making the Jewish state’s spying consequence free. He provides a “conservative estimate” of 125 viable investigations into Israeli espionage involving both American citizens and Israelis that were stopped due to political pressure.

So, did Israel really spy on Donald Trump? Sure it did. And Netanyahu is, metaphorically speaking, thumbing his nose at the American president and asking with a grin, “What are you going to do about it?”

Philip M. Giraldi, Ph.D., is Executive Director of the Council for the National Interest, a 501(c)3 tax deductible educational foundation (Federal ID Number #52-1739023) that seeks a more interests-based U.S. foreign policy in the Middle East. Website is https://councilforthenationalinterest.org, address is P.O. Box 2157, Purcellville VA 20134 and its email is [email protected].