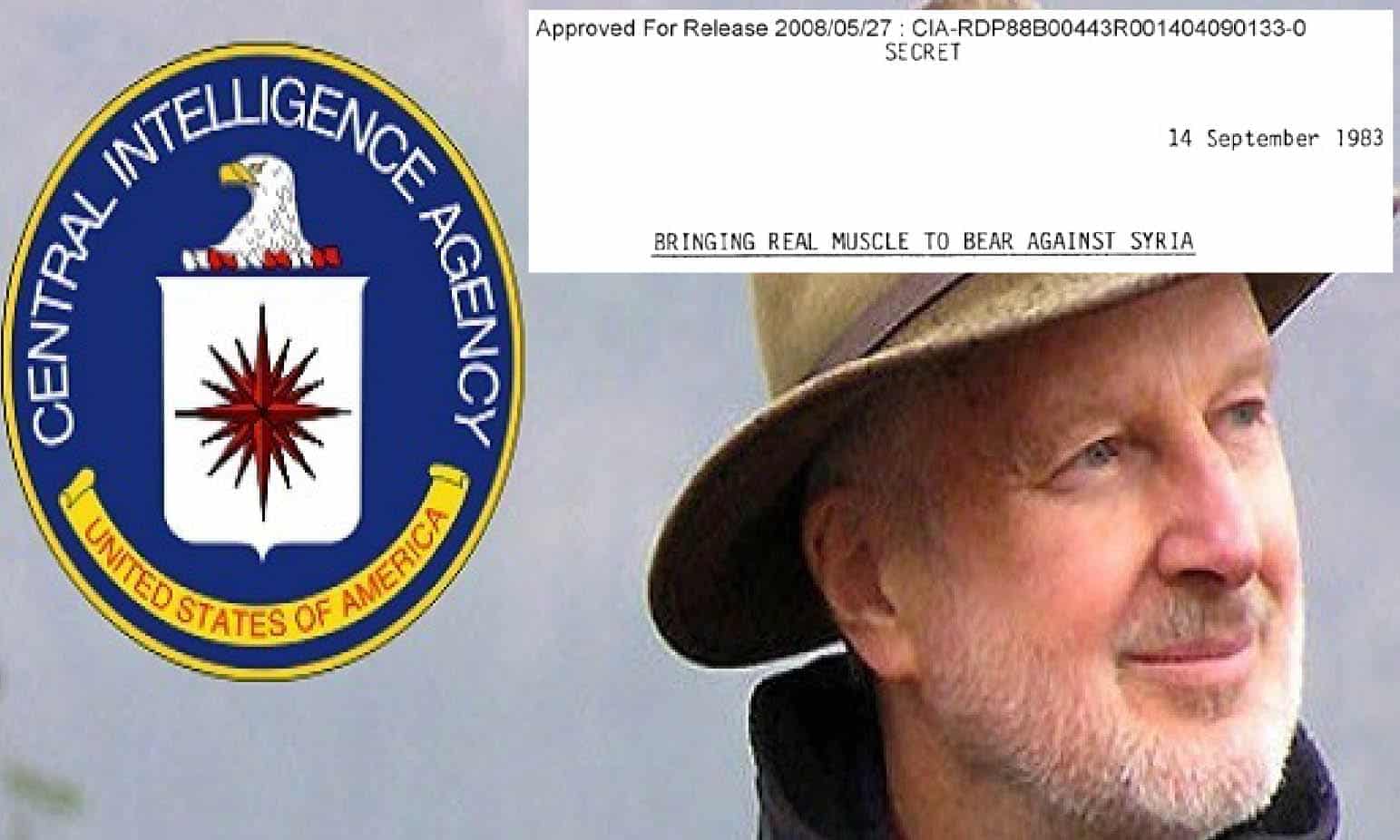 «Syria at present has a hammerlock on US interests both in Lebanon and in Gulf, through closure of Iraq’s pipeline thereby threatening Iraqi internationalization of war. The US should consider sharply escalating the pressure against a Assad through covertly orchestrating simultaneous threats against Syria from three border states hostile to Syria: Iraq, Israel and Turkey».

In an paper of the American CIA (Central Inteligence Agency), declassified on May 27, 2008 and therefore available as Open Source Intellgence (Osint), the occult project of military aggression against Syria by the US is described and also the reasons for doing so.

Signing the document is not just any secret agent but Graham E. Fuller, operating in the Middle East during the administration of President Ronald Reagan (1981-1989), who later became CIA office in Washington and vice president of the US National Intelligence Council.

Three are the certainties that emerge from the document: the need to threaten the Syrian president of that time Hafiz Al Assad, father of Bashar, for his hostility to the Iraqi gas pipeline Qatar-Turkey strongly backed by the Muslim Brotherhood of Sunnite Islamic confession, and therefore enemies of the Shiite Alawites who support the head of syrian government, the rooting of American terrorists as a force of provocation, and the pushing for military action by Iraq, Israel and Turkey.

Is disconcerting that the CIA document (PDF link below article) dates back to September 14, 1983, 23 years before the official start of US State Department funding for anti-Assad rebels, as revealed in a previous report based on a thorough investigation by the British newspaper The Guardian.

THE CONSPIRATORS AGAINST ASSAD

In 2019, after about half a million deaths in the Syrian civil war still in existence in the governorates of Idlib and Deir Ezzor, due to the presence of armed Hayat Tahrir al-Sham HTS jihadists armed from Turkey in the north and the US-backed SDF Kurds in the Euphrates valley, very rich of oil now smuggling by US with terrorists help.

THE OIL SMUGGLING BY US ARMY WITH TERRORISTS HELP

The CIA plan can be considered fulfilled as regards the role of Israel, which for years has bombed Syria with the specious excuse of hitting the Lebanese Hezbollah and Pasdaran Iranian positions intervening to help Bashar al Assad against the Islamic State, and for that of Turkey which has conquered Afrin leaving it in the hands of ferocious jihadists who carry out every kind of abuse against the Kurds.

THE CIA PLAN AGAINST ASSAD AND SYRIA

The document of the secret agent Fuller, however, reveals an overly optimistic scenario on the role of Iraq that at that time was still ruled by the dictator Saddam Hussein, killed only in 2006 after the Second Gulf War that destroyed the country making it incapable to a acted against Syria.

For this in Mosul Al Baghdadi,  the alleged CIA agent but also Mossad man according other sources, in 2011 founded, with the help of the US, the ISIS (Daesh in Arabic) that conquered much of Syria before being defeated by the Syrian army SAA with the help of that of Russia and the Shiite militias.

To combat the Sunni jihadists of the Islamic State in Iraq, during the civil war following the fall of the despot, in 2014 the Hashd al-Sha’abi Popular Mobilization Forces, with a Shiite majority, were born and increasingly assumed power, favoring the hegemony of the Shiites in Baghdad and a new alliance between Iraqis and Iranians.

A similar collaboration was born between Syria and Lebanon since 2008 when the interim Lebanese president Michel Aoun, a Maronite Christian, met Assad, extremely tolerant of all religious denominations, to sanction peace between the two states previously engaged in a serious conflict.

Having said this, let us now see what the CIA wrote in 1983 by Graham Fuller. «Iraq, perceveid to be increasingly desperate in the Gulf War, would undertake limited military (air) operations against Syria with the sole goal of the opening pipeline.

Although opening war on a second front against Syria poses considerable risk to Iraq- Syria would also face a two-front war since it is already heavily engaged in the Bekaa, on the Golan and in maintaining control over hostile and restive population inside Syria» wrote Graham Fuller in 1983 Cia secret act,

«Israel would simultaneously rais tensions along Syria’s Lebanon front without actually going war. Turkey, angered by Syrian support to American terrorists operatinh our of northern Syria, has often considered launching unilateral operations against terrorist camps in northern Syria. Virtually all Arab states would have simpathy for Iraq» we can read in the unsealed document that is very important for high profile of the author.

THE GANGSTER NETANYAHU AGAINST SYRIA

Graham E. Fuller (born November 28, 1937) is an American author and political analyst, specializing in Islamic extremism. Formerly vice-chair of the National Intelligence Council, he also served as Station Chief in Kabul for the CIA. A “think piece” that Fuller wrote for the CIA was identified as instrumental in leading to the Iran–Contra affair.

He served 20 years as an operations officer in the CIA. Assignments include postings in: Germany, Turkey, Lebanon, Saudi Arabia, North Yemen, Afghanistan, and Hong Kong. Fuller was Kabul CIA Station Chief until 1978, when he was brought to CIA headquarters in Washington, where he was appointed National Intelligence Officer for Near East and South Asia in 1982. In 1986, the CIA appointed him vice-chairman of the National Intelligence Council.

After a career in the United States State Department and CIA lasting 27 years, he joined Rand Corporation think-tank as senior political scientist specializing in the Middle East. As of 2006, he was affiliated with the Simon Fraser University in Vancouver, British Columbia, as an adjunct professor of history. He is the author of a number of books, including The Future of Political Islam.

THE MUSLIM BROTHERHOOD PIPELINE IN SYRIA

«Faced with three belligerant fronts, Assad (Hafiz – ed) would probably forced to abandon his policy of closure of the pipeline. Such a concession would bringing the war to an end. It would be a sharp blow to Syria’s prestige and could effect the equation of forces in Lebanon». The CIA secret agent wrote about the Qatar-Turkey pipeline.

That was a proposal to build a natural gas pipeline from the Iranian–Qatari South Pars/North Dome Gas-Condensate field towards Turkey, where it could connect with the Nabucco pipeline to supply European customers as well as Turkey.

One route to Turkey was via Saudi Arabia, Jordan, and Syria, and another was through Saudi Arabia, Kuwait and Iraq. Syria’s rationale for rejecting the Qatar proposal was said to be “to protect the interests of its Russian ally, which is Europe’s top supplier of natural gas”.

In 2012 an analyst cited by Ansa Mediterranean suggested that Qatar’s involvement in the Syrian Civil War was based in part on its desire to build a pipeline to Turkey through Syria:

“The discovery in 2009 of a new gas field near Israel, Lebanon, Cyprus, and Syria opened new possibilities to bypass the Saudi Barrier and to secure a new source of income. Pipelines are in place already in Turkey to receive the gas.

Only Al-Assad is in the way. Qatar along with the Turks would like to remove Al-Assad and install the Syrian chapter of the Muslim Brotherhood. It is the best organized political movement in the chaotic society and can block Saudi Arabia’s efforts to install a more fanatical Wahhabi based regime.

Once the Brotherhood is in power, the Emir’s broad connections with Brotherhood groups throughout the region should make it easy for him to find a friendly ear and an open hand in Damascus”.

THE “EXERTION OF REAL MUSCLE” AGAINST SYRIA

But now is the unsealed CIA paper tha confirm this theory. «Syria continues to maintain a hammerlock on two key US interests in the Middle East: Syrian refusal to withdraw its troops from Lebanon ensures Israeli occupation in the south; syrian closure of the Iraqi pipeline has been a key factor in bringing Iraq to its financial knees, impelling it towards dangerous internationalization of the war in the Gulf» wrote Fuller.

«Diplomatic initiatives to date have had little effect on Assad (Hafiz – ed) who has so far correctly calculated the play forces in the area and concluded that they are only weakly arrayed against him. If the US is to rein in Syria’s spoiling role, i can only do so through exertion of the real muscle chich will pose a vital threat to Assad’s position and power» adds the CIA report.

«Such a threat must be primarly military in nature. At present there are three relatively hostile elements around Syria’s borders: Israel, Iraq and Turkey. Consideration must be given to orchestrating a credible military threat against Syria in order to induce at least some moderate change in its policies – highlights the american secret agent – This paper proposes serious exaination of the use of all three states – acting independently – to exert the necessary threat. Use of any of one state in isolation cannot create such credible threat».

Some years later in Syria exploded a bloody war with more than half of million deaths. Now we can thanks to CIA and the White House policies: «Bringing real muscle to bear against Syria». For stealing oil and increasing the zionist-freemason weapons lobby.