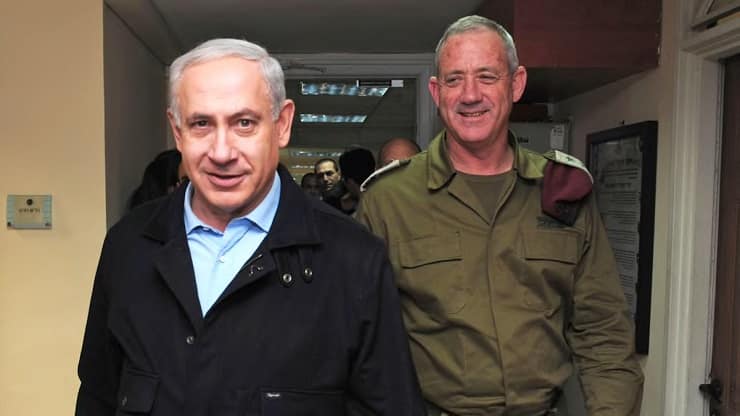 [ Editor’s Note: This was my election report for NEO. The voting was over, so I focused primarily on the battle between Bibi and Benny Gantz, as to who Israel’s president picks first to try to form a government, where Bibi’s life is going to change forever if he loses.

And if neither can do it, we could be looking at a third election, which nobody wants. It is every man for himself at this point, Bibi more than most, as his deep-pocket friends are rumored to encourage various parties to vote the right way to keep him out of the fraud and corruption courtroom.

We are on the front end of some major wheeling and dealing. Former Prime Minister Ehud Barak has said,

“The reversal now has to be completed by the establishment of a government without Netanyahu, which will force the Likud to choose new leadership and replace him.”… “it is incumbent upon Benny Gantz, Avigdor Lieberman, the Democratic Camp, Labor and the Joint List — representing a total of 63 Knesset seats — to unanimously recommend Gantz”.

That would make Israeli history by having a majority Arab party as part of the government, which would entitle it to intelligence briefings. You could imagine that many in the Gantz coalition would squeal at that. And Lieberman has said he would never sit in a government with Arabs in it — welcome to Zio-land.

But these party leaders also have to worry about a backlash from their voters if they flub that ball and have to go the 3rd-election route. The only good thing I can see about this process is that it might tone down Israeli attacks on its neighbor to avoid stumbling into a war in the middle of this post-election mess.

And last, after all of Trump’s pre-election help in endorsing Bibi, he has been stone-cold silent now; and what I would give to know Bibi’s feelings about that … JD ]

The dust from the Israeli election is beginning to settle after the preliminary count, showing Benny Gantz with 32 seats and Netanyahu with 31. The close race was expected, but the big surprise was that the United Arab Party received 13 seats, two more than expected, and became the third largest party in the Knesset.

You can imagine the celebration they had. I want to give an honorable mention to what is left of the Left wing party, whose members broke the law to give rides to Bedouins to the voting stations to vote for the United Arabs.

Bibi tried to start a Gaza to postpone the election

But before I get into a discussion about who will get to form a government, there is another election story that most of the world does not know Haaretz broke the story on Monday, with the Jerusalem Post taking time today to write a fuller version of what happened.

It began with Bibi doing a campaign tour of Ashkelon and Ashdod. As the time of his speaking event was known, someone in Gaza fired two rockets in the direction of the city. One was shot down by the Iron Dome and the other landed in an open field. What happened next was classic Israeli politics.

Bibi made a big show by stopping his speech and taking cover, while in Ashkelon, Blue and White MK Gabi Ashkenazi continued on with her speech, saying, “We’re continuing our conference in Ashkelon as usual; we are not afraid of Hamas or Hezbollah. That is the answer.” The lady has some grit.

While Bibi was returning to Tel Aviv, he had his staff convene an emergency security meeting. Haaretz reported that those attending included IDF Chief of Staff Aviv Kochavi, Shin Bet director Nadav Argaman, Mossad Chief Yosse Cohen, National Security Adviser Ben-Shabbat, Military Intelligence director Tamir Hayman, and Bibi’s military secretary, Avi Blot. Bibi asked them to begin planning a Gaza attack. He had an historic photo taken of them all for future use.

The attendees later began discussing among themselves that a strong retaliation against Gaza for one rocket landing in a field might trigger the 500-rocket barrage in the lead up to the election. Hamas had earlier promised that when attacked again on a large scale it would respond quickly.

Whispers began that Bibi was blowing the “one rocket landing in a field” incident out of proportion for his political benefit in the election. The military saw themselves as being abused.

Before Bibi left for his meeting with Putin, he had a phone conference with some of those who had attended the first meeting asking for a vote to proceed with a Gaza retaliation, to which Haaretz says they complied.

The military and security heads save Bibi from himself

But, while Bibi was away at the meeting, those with cooler heads worked to head Bibi’s Gaza retaliation off at the pass. After consulting with Attorney-General Avichai Mandelblit, National Security Adviser Ben-Shabbat met with the head of the elections commission, Hana Melcer to brief her of the situation.

The attorney general then spoke to Bibi to tell him that, since his proposed retaliation could lead to war, it would require the approval of the full security cabinet. Bibi decided to give up the effort at that point.

When the Haaretz story went public Monday, Benny Gantz Tweeted: “Netanyahu did away with ambiguity for political ends. Now he’s lost it and wants to drag us into a war to postpone the elections. This is a scenario that belongs [in the TV show] House of Cards, not in the State of Israel.”

To let Bibi save face, a small air raid was launched, which hit a few Hamas targets with no casualties.

The new battle now is over who Israel President Reuven Rivlin will first choose to attempt forming a new government. Netanyahu’s Likud and conservative-nationalist parties have enough seats to cross the needed 61-seat threshold with Lieberman’s Russian party playing the kingmaker role putting them over the top.

One of Leiberman’s key requirements is removing the special privileges of the Ultra-Orthodox Jews that they are exempted from military service on top of never having to work, literally on government stipends for all their basic needs paid for by working Israelis.

Leiberman says he wants to form a larger nationalist party by bringing in Gantz’ Blue and White faction. There has even been talk of a rotating Prime Minister creation, where Bibi has insisted he go first, and he had good reason.

Bibi’s criminal corruption trial begins in January, and if he is PM again, that would have to be postponed. Others consider the idea of a rotating PM as fraught with endless potential problems. If the new PM does not like what the past one did, he just pulls a Trump and undoes it.

And what about the situation where foreign policy negotiations are ongoing and Israel has to switch PM horses in the middle of negotiations? And what about if there was a war going on when it was time to rotate. Israel is already a hard country to govern. It could become impossible.

Could Benny Ganz pull the Arab party out of his hat?

Gantz could have another option, one despised by Bibi, Leiberman. The Gantz coalition could solidify more than 61 seats by inviting the New Arab Party into the government with its 13 seats. Bibi, the religious Orthodox and the Arab-hating settler parties, would go nuts.

Gantz is no knight in shining armor for the Israeli Arabs nor the Palestinians. There leaders say they see no change in their treatment whoever wins. But, if Ganz is crafty, he could bargain with the United Arab Party to achieve a better deal with Bibi and then leave them hanging.

Media has not reported much on what the goal of the Arab party is other than be the opposition. Sure, they would have a vote, but what could they ever win?

Another caveat, from those privy to the first day of preliminary negotiations, was if a rotating PM position could be agreed to, Bibi would have to agree to resign if he is PM at the time he is indicted, which I could not see him agreeing to.

The war fuze is burning in the Persian Gulf

At the same time while we have all this chaos going on in Israel, we are once again on the brink of war in the Persian Gulf. The Houthis today gave their most detailed description of how they claim they pulled off the attack on the Aramco facilities, showing their own drone footage to prove they had been scouting targets.

They rolled out that they have a 1500-km combat drone, and warned the UAE and Abu Dhabi that if the bombing attacks don’t stop on Yemen and Iran continues to get blamed, they might make another demonstration to show they can defeat their radars, also.

The Houthi briefing covered how they flew their combat drones under some of the cruise missiles to screen them from Saudi radars and how their missiles used jammers to defeat the radars.

Yesterday, the Saudis said they were going to bring in French and American experts to help with their investigation, yet this morning, the army spokesman put on a press show that the Saudi military had concluded that Iranian equipment was used, showing some of that collected.

The claim was made again that they came in from the north, so the Houthis could not have done it, with no further explanation. If I had been there, I would have asked if I had been the Houthi commander and knew the Saudi radars were weakest on the northern flank, why would I have not flown around the west side to attack from the north?

Why is no one calling for a UN investigation?

And so far, not a peep from the manufacturers of the Saudi radars as to how they failed so badly, especially the Patriots, despite their poor record. I can see a lot of scrambling are by parties wanting to protect themselves from blame if this situation blows up, literally.

Think about all the coverage we had on 9-11 of the devastation and compare that to the complete lock down by the Saudis of any independent viewing of the Aramco damage by the media. So far the reported casualties are zero.

What are they afraid of? What are they hiding? Why should we trust any of their claims without an open UN investigation when we can all suffer from even more massive destruction in the Gulf.