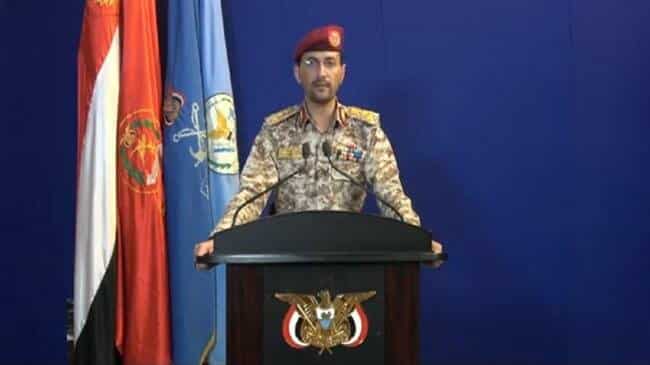 [ Editor’s Note: The Yemenis have thrown the Saudis a curve ball, asking for a bombing truce and unilaterally going first. This is a good move if one had a new attack lined up and did not want to look like the wanton aggressor that Saudi Arabia has been.

If the Saudis continue to bomb Yemen now the Houthis can respond with another big attack and blame it all on the Saudis with Yemen having 4th Geneva convention cover via the right of self defense with through retaliation.

The fly in the ointment is the electronic warfare high end plane the US has moved in now with “look down” capability. It made sense to not make an attempt at attacking Iran while knowing there are big holes in the Gulf coalition radars.

That said, if the Yemenis do another Aramco size attack, it will bolster that they did the first, and take the wind out of the sails for a retaliation on Iran.… Jim W. Dean ]

The spokesman for Yemeni Armed Forces has lauded the highly disruptive drone attacks on Saudi Aramco petroleum and gas processing plants at Abqaiq and Khurais in the kingdom’s Eastern Province as an outstanding example of the military prowess of Yemeni army troops and allied fighters from Popular Committees.

“Our forces have reached a high level of efficiency and ability. They can manufacture various types of unmanned aerial vehicles in record time. The Second Deterrent Balance Operation, which targeted Saudi oil installations, is a perfect example of the capabilities of our forces in terms of planning and implementation,” Brigadier General Yahya Saree said a press conference in the capital Sana’a on Wednesday evening.

He added, “We assure the world that the free and steadfast Yemeni nation will not hesitate to respond to the (Saudi-led) coalition of aggression, and will use its legitimate right to target all targets deep inside the countries involved.”

Saree highlighted that aerial photographs, taken by Yemeni reconnaissance drones in the wake and aftermath of the operation, show the extent of damage caused on the two major oil facilities in Saudi Arabia, stating that it was launched following a careful intelligence collection process.

“The destruction of the targeted facilities is far greater than what has been announced. Americans sought to publish fabricated pictures of the operation aftermath as part of attempts to downplay it. The blaze lasted for several hours and authorities in the state of aggression (Saudi Arabia) could not contain it,” the high-ranking Yemeni military official pointed out.

Saree went on to say that various kinds of combat drones were used in the Second Deterrent Balance Operation, noting that they were launched from three different locations according to their flight endurance and designated targets.

He underlined that the third generation of domestically-designed and -manufactured Qasef (Striker) combat drones, long-endurance Sammad-3 (Invincible-3) drones – which have an operational range of 1,500 kilometers to 1,700 kilometers and newly-developed drones equipped with jet engines.

Saree said each of the new drones can carry four precision-guided bombs with fissionable heads every time, and can monitor and hit their targets from several angles.

“Other aircraft were also used so the main combat drones could hide in their shadow without being detected, and signal jamming devices effectively disabled the enemy’s air missile defense systems,” he said.

The spokesman for Yemeni Armed Forces then cautioned the United Arab Emirates against its atrocious military campaign in Yemen, emphasizing that Emirati officials will rue the day if they continue their aggression.

“Simply one operation can inflict heavy losses upon them and strike them with a pang of regret. We hereby announce that dozens of targets in the UAE, namely in Abu Dhabi and Dubai, are within our range. We urge the aggressors to stay away from Yemen if security and safety of their infrastructure and glass towers matter to them,” Saree concluded.

Japan says it has not seen any evidence to prove a claim by the United States that Iran was involved in recent attacks on Saudi oil facilities.

Saudi Arabia and a number of its regional allies launched a devastating campaign against Yemen in March 2015, with the goal of bringing the government of former president Abd Rabbuh Mansur Hadi back to power and crushing Houthi Ansarullah movement.

The US-based Armed Conflict Location and Event Data Project (ACLED), a nonprofit conflict-research organization, estimates that the war has claimed more than 91,000  lives over the past four and a half years.