College students are increasingly finding ‘sugar daddies’ preferable to student loans – and can we really blame them?

[ Editor’s Note: I saw all this coming back when uber-pimp Bush 43 pushed through the new twist in the bankruptcy laws barring student loans from using that as an escape hatch. As the loan default numbers grew, word spread around that “hey, why be a debt slave when you can just stiff the man?” It was pitched as a rebellion thing. Bush put the kabosh on that.

Even in the early 2000s, I was reading about college campuses where students were throwing “rent parties”, where attendees bought chips to use to purchase a wide variety of sex acts, which included gorgeous coeds scooping up a lot of dough.

One girl interviewed said she regretted having given thousands of dollars of sex away earlier before this fast return investment idea came along.

But things have gotten a lot more colorful since then, and less chances of catching a disease or ending up with a human trafficker like Epstein, for whom college girls might have been a bit too old.

Note the mention below that credit card lines thrown at college kids and pressure to keep up with the Jones finds college kids having CC debt more than their loans. How they can get credit lines that high is beyond me.

At the end of the day, a lot of these kids should have consulted my wife who would have advised them to go the community college route for the first two years and then transfer to an in-state 4-year university… Jim W. Dean ] 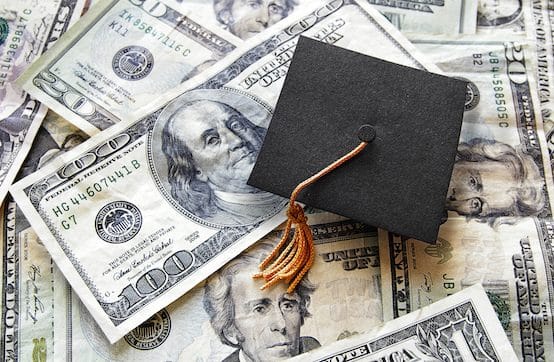 Some 2.5 million US college students are reportedly “seeking arrangement” with older adults in hope of avoiding the yoke of student debt. With college costs out of control, monetizing desperation has become an industry.
–

Are students really dabbling in glorified prostitution to pay their way through college? According to Seeking Arrangement, a site that connects “sugar daddies” and “sugar mommas” – wealthy older people looking for companionship, usually but not always sexual in nature – with “sugar babies,” the young and hungry willing to provide it in exchange for lifestyle perks, 2.5 million of its users are American college students seeking to avoid the student debt trap.

College students are certainly taking note of the fact that over 42 million Americans are saddled with an average of $40,000 in student loan debt. It’s very likely they see supplying sexual favors to the aging rich as the lesser of two evils, an easy route to the high-end lifestyle they’re taught from an early age is the pinnacle of human achievement.

Television, Hollywood, popular music – all flash the message that one’s value as a person is directly proportional to the numbers in one’s bank account, and surrounding oneself with expensive objects is the key to happiness. A college degree, too, is presented as a must-have for professional success, even as the amount of money required to obtain it balloons. 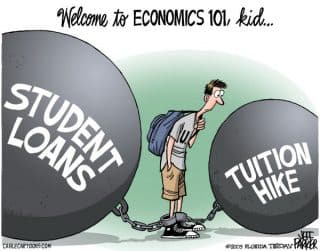 The costs of college have skyrocketed over the past 20 years, increasing 254 percent for private colleges and 321 percent for public colleges (in-state), much of that growth having occurred since the housing bubble popped in 2008 and SLABS – student loan-based asset-backed securities – replaced mortgage-backed securities as the trendy investment du jour for investors looking to capitalize off the desire for the American dream.

Unlike mortgages, students can’t default on their loans – even declaring bankruptcy doesn’t clean the slate – so the bubble keeps inflating and investors keep buying. Indeed, the only people who lose in this scenario are the millions of students who miss out on the life they feel they deserve because their wages are permanently paying off a loan two-thirds of them will come to regret taking out in the first place.

While Seeking Arrangement claims to have “arrangements” in 139 countries, most of its users are in the US, where some 11.4 million “sugar babies” are living the high life – or merely scraping by (students, it seems, are only a small portion of the total).

These sugar babies likely have real needs beyond the desire for fancy clothing or expensive dinners – the United Way’s ALICE program claims some 43 percent of Americans cannot afford basic needs like food, shelter, healthcare, and childcare from month to month, and that’s before education even enters the picture.

Credit card debt has eclipsed student loan debt as the number one financial burden on millennials, who are forced to use them to pay for those basic needs. In a world where appearances are paramount and the average person cannot afford luxuries – stories of Instagram “influencers” going into debt to maintain their illusory perfect world abound – the sugar daddy or momma is a vital resource.

Taught all their lives that the American dream awaits them if only they’ll just try hard enough, many American students graduate only to become thoroughly discouraged when they have to take low-paying jobs outside their field of study or move back in with their parents because they’ve been sold a bill of goods.

Compared to a lifetime of debt slavery – a recent survey found more than a quarter of baby boomers believe they’ll die before paying off their debts – escorting may look like a walk in the park. Sugar babies aren’t prostitutes, but it’s fair to say the concept is nearly as old as the “world’s oldest profession.”

Still, if Seeking Arrangement’s numbers are to be believed, what was once done discreetly, even with a modicum of shame (“gold digger” used to be a pejorative term) is now out in the open, a matter of pragmatism or necessity, even a source of pride (one need only Google “gold digger” to see a vast array of t-shirts boasting that the wearer is a proud member of the no money, no honey club).

If the elites of the future are becoming high-end escorts to support their certification process as masters of the universe, surely the phenomenon has gone mainstream. Perhaps this is why so many schools had no problem taking the notorious Jeffrey Epstein’s money – what was he if not the world’s most sinister sugar daddy, luring impressionable young girls in with the promise of money and fame?

The 10 million users Seeking Arrangement counts include four times as many “babies” as “daddies/mommas,” indicating there’s a whole lot of desperate “entrepreneurs” out there. It’s a buyer’s market, and who are we to judge those who’d rather be “owned” by a sugar-parent than by a bank?

Seeking Arrangement bills itself as a better alternative to traditional relationships, which “fail because there is not enough give and too much take…Things would be much easier if goals and starting points were already set forth before entering said relationship.”

Anyone with a romantic bone in their body might find their stomach turning at that sentence, but as neoliberal capitalism has chewed up and spit up so much of what American society once held dear, why should romance be exempt? Desperate times call for desperate measures. Who can afford romance anymore?