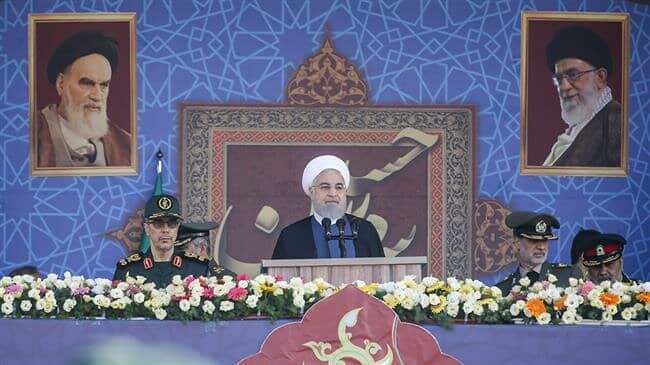 [ Editor’s Note: Rouhani intends to present a Hail Mary peace plan at the UN. While I admire the move, I wish him luck, as he will need all he can get. Unless the good fairy descends upon the UN this week and sprinkles magic dust, any transformation is unlikely.

All that said, getting the foreigners out of the Gulf would be a nice idea so a “regional security force” could take responsibility. If Rouhani had consulted me, I would have advised him that any plan which does not include ending the Yemen war first is bound to fail.

Why? Because when people are blowing each other up, it is not the best time to talk about throwing a Gulf security party. No such force could ever be established without all its members renouncing the use of force to settle their differences.

The few hundred billion spent on the US-coalition proxy terrorism war against Syria and a half million dead – from which the coalition got nothing, unless you discount the pleasure of some – could have gone into capital projects that would have earned the funders long term dividends. Now they are hated by the victims’ families.

The Gulf requires some clear thinkers before any clear thinking can be done. An example of the lack of that is the Saudi’s MsB thinking he is going to float $100-billion in Aramco shares, when the match has already been lit for a Gulf War. Who in hell would buy those shares now?

Defense industry companies invest in war. Market traders and pension funds do not. Those who have stoked the fires of mayhem in the Mideast know who they are, and so do all the rest of us … Jim W. Dean ]

Iranian President Hassan Rouhani says Iran will present at the United Nations this year an initiative for regional cooperation to ensure peace in the Strait of Hormuz.

President Rouhani made the remarks in Tehran during a military parade  commemorating the 39th anniversary of the start of the Iran-Iraq War on Sunday.

Rouhani said Iran extended a hand of friendship and brotherhood to all its neighbors and was “even ready to ignore their past mistakes… because the enemies of Islam and the region” were seeking to take advantage of the rifts among regional states.

“The security of the Persian Gulf, the Strait of Hormuz, and the Sea of Oman is indigenous,” President Rouhani said. “Foreign forces could cause problems and insecurity for our nation and region.”

“This year at the United Nations, we will present to the world the Hormuz Peace Initiative — the gist of which is love and hope — with the slogan ‘The coalition of hope,’” he said.

Rouhani said the initiative will envision the provision of security for the Persian Gulf, the Sea of Oman, and the Strait of Hormuz with cooperation among Iran and other regional countries.

He also warned that the presence of foreign forces endangers the region as well as maritime and energy security.

President Rouhani is scheduled to travel to New York for the annual UN General Assembly meeting on Monday.

In his Sunday speech, he also advised the countries that are seeking to blame Iran for the recent regional incidents to stop sending “dangerous weapons” to the region instead and “stay away” from it.

Rouhani also censured the American military for bringing insecurity to whatever place it set foot in, including Afghanistan, Syria, Iraq, and the Persian Gulf.

On the contrary, he said, Iranian Armed Forces have brought security to the countries that they have helped.

“When they (Iranian Armed Forces) stood by the side of the people of Iraq, Syria, Palestine, and Lebanon, they brought security to those lands and managed to root out savage terrorists in the region. That is how we are different from the enemy,” the Iranian president said.

He said Iran would neither allow any violation of its borders nor would it violate those of other countries.

The economic war on Iran, accompanied by psychological warfare and threats of military aggression, is meant to first and foremost target the Islamic Revolution, he said, adding that the nation however has the capability to withstand arrogant powers as it did during the Iraqi-imposed war.

Forces from the Iranian Army, the Islamic Revolution Guards Corps (IRGC), Police, Border Guards, and Basij are participating in the parades that started on Sunday and that are being held in Tehran and 30 other provincial capitals, as well as in the waters of the Persian Gulf.