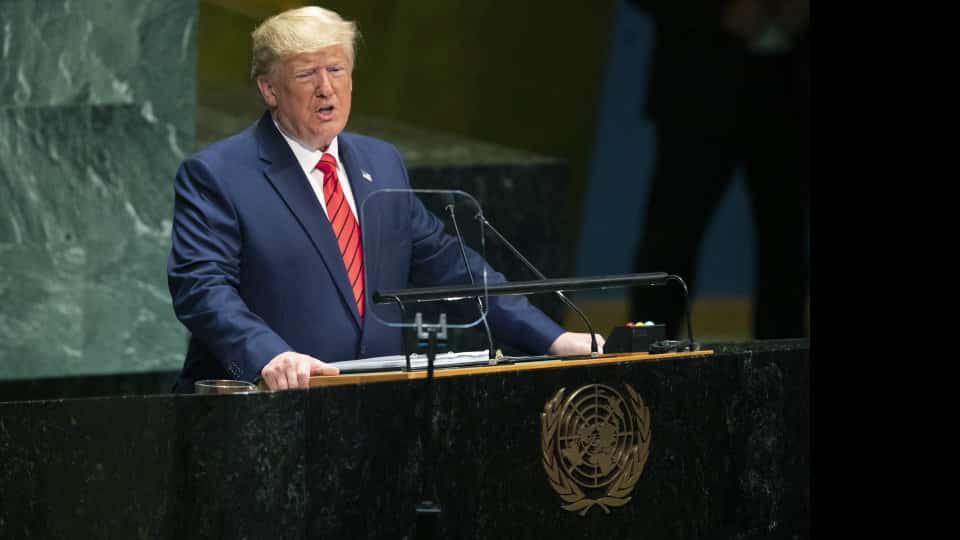 Trump just finished his speech in front of the UN and one thing was missing: any major denunciation of Iran, or anybody, for attacking Abqaiq last week. A denunciation, and a pledge of action to follow, that would have been expected by an American president since WW2.

ROBERT STEELE: John Robb goes on to say, incorrectly, this:

Wow. Essentially, the most geostrategic energy facility in the world, ostensibly under US aegis for over half a century, was successfully attacked and…. we are doing nothing.

We are signalling to the world that we don’t care enough about the Middle East and their precious oil, something we have spent trillions and bled copiously to do in the past, to protect it now…

What John is missing is that Trump has finally figured out that the US IC is either completely incompetent (unable to detect 20 jet engines moving from Yemen or Jordan or wherever they were launched, into Saudi Arabia, at the same time that NSA and CIA were worthless on the Early Warning normally provided by SIGINT and deep HUMINT) or complicit in the insider attack arranged among Israel, Saudi Arabian insiders, and the Central Banks.

I have been having this discussion with some others.

First, the intelligence failure. On a scale of 1-7, 1 being tops, Iran is probably a 2 and Yemen a 6 or 7.  Just as with Somalia, we still don’t have 1:50,000 combat charts, we still don’t do SIGINT (we probably don’t have a single person able to do the tribal dialects), and we have neither clandestine HUMINT nor IMINT able to loiter.  In Iran we have no clandestine HUMINT worthy of the name — the village idiots were wrapped up recently — and we probably have fewer Farsi speakers than we do Chinese speakers — shades of the past, when the Iranians were rightfully upset to learn that not a single CIA person in the Station taken over spoke Farsi. We have an out of date satellite system that still cannot do multi-displinary tip-off. If drones flew, there was no SIGINT tip-off and there was no IMINT loiter capability  to do infrared capture of their launch point and flight paths.  There are no “Cuban missile photos” to show off, and everyone now knows that in a pinch the IC will simply make shit up (as Colin Powell now knows to his great chagrin). Alternatively, the US IC is in on the inside job, and in a state of treason in failing to tell the President that they know that this was an inside job.  The missile defense failure is not surprising. On the one hand, most of us know that Raytheon has a 30-50% failure rate and that missiles are only as good as their target acquisition, and Raytheon is a quarter century out of date on target profiles. On the other hand, what if there were no drones at all and these were hand-emplaced explosives combined with staged debris and a few well aimed tank rounds?

There is a third alternative that Benjamin Fulford has just emailed me that I share with his permission:

My understanding is the US military actually staged the attack in cooperation with the Houthis. The purpose of this was to a) read the riot act to the Wahab sponsoring Saudis b) work towards a broader Middle East peace agreement by inducing Iran to see them as sincere c) force the Saudi/Israeli alliance to give up their messianic projects.

I respect Ben very much, and would be delighted if this third alternative were the reality  that enabled President Trump to not be bellicose against Iran at the UN. The enemies of peace are indeed the Zionists and the Saudi leadership.

Second, the geostrategic issue. I have no direct access to the President but I think he has finally had it with both the Zionists and the Saudis.  He rightly suspects this was an inside job and that the Zionists and the Saudis were seeking to manipulate the oil market while manipulating the USA toward a war against Iran that is totally uncalled for (if anything, Iran should be declaring war on the USA for its totally unwarranted economic sanctions). The Zionists with their global state-sponsored  terrorism and their global censorship and manipulation of all manner of information channels, and their pedophilia entrapment blackmail networks that exist in each of the 50 US states as well as every country in the world, need to be put down. The Saudi leadership, on thin ice with its own people while waging genocidal wars against Yemen and Somalia, needs to be put down. And finally, oil is going away as the key energy force.  Free energy is coming soon, President Trump knows this, he knows what the USA has in both fossil energy reserves and natural gas and renewable energy and he rightly does not give a shit about the Saudi situation.

So John hits the key point: President Trump was a genius at the UN for what he did not say (and by the by, he almost certainly met with President Hassan Rouhini and a Trump state visit to Iran will be announced before the New Year). What John is missing is that the time to uninvent the invented state of Israel has arrived; President Trump understands that he needs to make the deal of the century with the Supreme Leader of Iran not the criminal leadership of Israel (and in passing, the President also understands that Jared Kushner, widely known as a clown prince who can be bought, is doing nothing useful for his re-election).

Conclusion: President Trump is on a path to greatness.

Despite all the efforts by the Deep State to wage war on the world for profit, the President is sticking to his campaign promises. Many do not see that because they do not understand that he has had to keep his enemies close and be a master of CREDIBLE deception but this speech was the truth-teller. This speech also put him at risk of being CONVICTED in the Senate and ACTUALLY impeached and driven from office, because this speech united the extreme right Republicans in Name Only (RINO) with the extreme left. The Zionists are doing everything they can to play both extremes against the President.

President Trump will survive this. He has many things he do, fourteen are listed below: