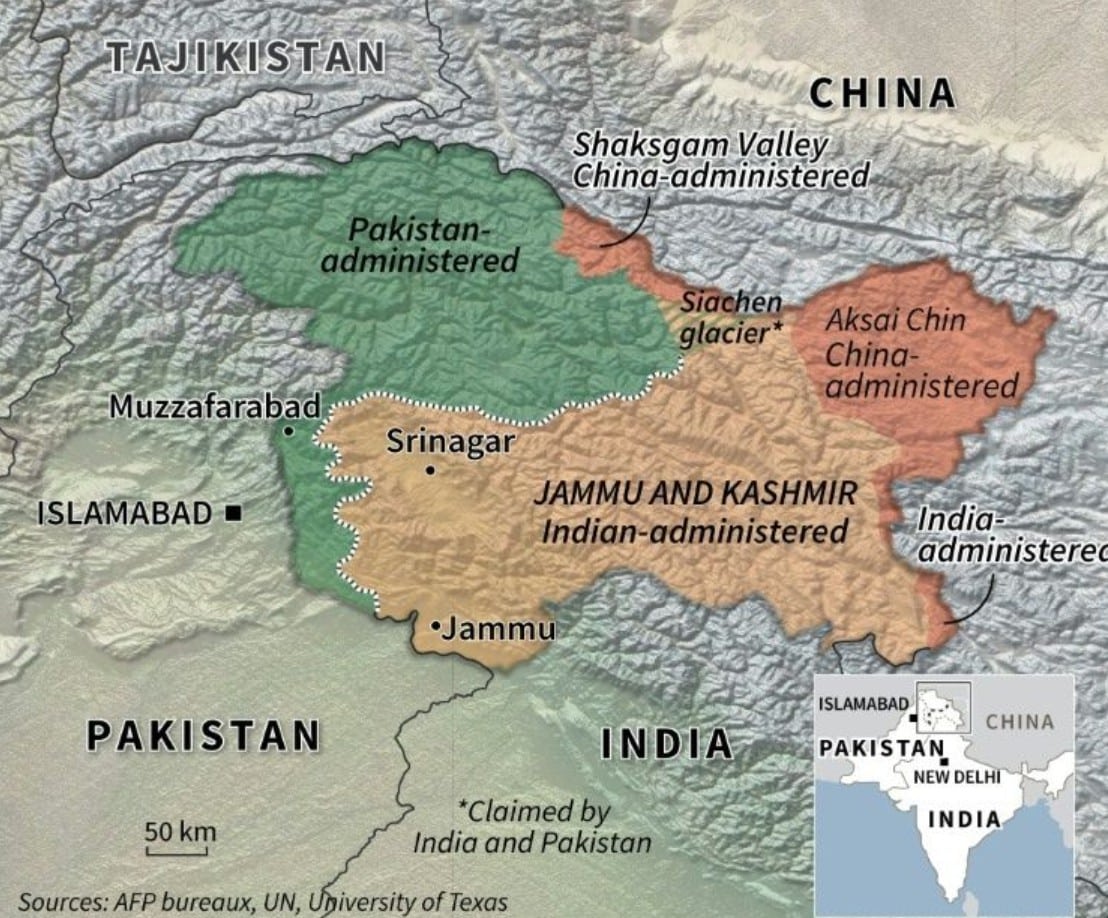 More than 50 days have been passed. Indian forces have continued lockdown and curfew in the Indian Occupied Kashmir (IOK). More restrictions have been imposed in wake of shortage of foods and even medicines for the patients. In order to hide human rights violations, communication services have been cut off from the world and foreign journalists are not allowed to enter that region Besides, Indian extremist rulers are also escalating tensions with Pakistan to divert attention from the drastic situation of the Indian Controlled Kashmir, and have continued shelling inside Pakistani side of Kashmir.

In response to the threat of nuclear war by Indian Defence Rajnath Singh, addressing a press conference, Pakistan’s army’s media wing-the DG of Inter-Services Public Relations (ISPR), Maj-Gen. Asif Ghafoor stated on September 4, this year: “There is no policy of no first use of strategic capability…use of nuclear capability is political…no solution to the Kashmir issue less than right to self-determination of Kashmir is acceptable to Pakistan…Pakistan is ready to go to any extent for Kashmir…war would become an option by compulsion and not by choice if other elements do not succeed in stopping brutalities in the Indian Held Kashmir.”

In fact, Indian forces have broken all previous records of gross human rights violations since August 5, 2019 when Indian extremist Prime Minister Narendra Modi’s government ended special status of the Jummu and Kashmir by abolishing articles 35A and 370 of the Constitution to turn Muslim majority into minority in the Indian Controlled Kashmir.

New Delhi which already had 500,000 troops in the Indian Held Kashmir sent almost 300000 extra troops. Despite India’s excessive deployment of troops in the Kashmir region, arrest of the Kashmiri leaders and the pellet guns shots, Kashmiris have accelerated the war of liberation, being waged for their right of self-determination, which was also recgonised by the United Nations resolutions.

Pakistan is continuously exposing the blunders, committed by the fundamentalist Premier Modi in relation to the IOK and Islamabad.

Pakistan’s Prime Minister Imran Khan who has declared himself an ambassador of Kashmiris, spent the days of his seven-day visit to the New York City in connection with the 74th session of the United Nations General Assembly opened on September 24. In his interaction with the United Nations, US lawmakers, scholars, human rights activists and the media, and meeting with the US President Donald Trump, he briefed them on the repercussions of the Indian annexation of the disputed Kashmir valley.

In this regard, Prime Minister Imran met the President Trump on September 23, this year. Addressing a joint press conference, Trump once again offered to mediate between Pakistan and India on the Kashmir issue. Trump said: “If I can help, I will certainly do…If both [Pakistan and India] want, I am ready, willing and able to do it…Kashmir is a complex issue that had been going on for a long time…I do believe that there is a solution”.

Regarding the “Howdy, Modi” rally in Houston on Sunday (September 22) in which the US president and Indian Prime Minister Modi shared a stage and showed each other with praise, Trump said: “He had heard a very aggressive statement from Modi on Sunday.

In his remarks on Kashmir, Prime Minister Imran stated, “Trump heads the most powerful country in the world, which has a responsibility to resolve disputes…We look to the US to put out flames in the world…even though Trump offered to mediate, India is refusing…In this situation, I feel that this is the beginning of a crisis. I honestly feel that the crisis is going to get much bigger [considering] what is happening in Kashmir.”

The lawmakers called on the PM Imran Khan on September 22, 2019 included US Senate Minority Leader Chuck Schumer and Chair­man of the Senate Judiciary Committee Lindsey Graham. Senator Graham was also among those four US senators who wrote a letter to President Trump recently, asking him to take immediate action to end deepening humanitarian crisis in occupied Kashmir.

PM Imran spoke at an event at the think tank-US Council on Foreign Relations. The premier also held a meetings with British Prime Minister Boris Johnson and rulers of various countries and the founder of the Kashmir Study Group Farooq Kathwari during which informed them about India’s illegal occupation and human rights violations in the occupied Kashmir so that they could see the real face of Modi’s government. He reiterated that he wants immediate lifting of the curfew imposed in the Indian Held Kashmir to lessen the suffering of the Kashmiri people. He pointed out that the two nuclear-armed neighbours have since been locked into a war of words, with tensions heightening at the border.

Prime Minister Imran is due to address the UN General Assembly on September 27, this year. He has already announced that he will highlight the Kashmir issue, exposing the ethical and legal bankruptcy of India’s annexation of the occupied Kashmir.

It is notable that during his address to the nation on August 26, 2019, Prime Minister Imran said: “India’s decision to revoke Article 370 would prove to be a historic blunder by Narendra Modi’s government in occupied Kashmir. Time will prove that the Indian government has given an opportunity to the Kashmiri people to get their freedom. They [India] have played their last card”.

However, addressing a press conference, marking the start of the General Assembly’s 74th session, on September 18, 2019, United Nations (UN) Secretary-General Antonio Guterres has once again offered to mediate the escalating Kashmir issue between Pakistan and India. He has emphasized on the need for respecting human rights in the Indian Controlled Kashmir which is under strict lockdown. He remarked that he would continue to advocate for the peaceful settlement of the decades-old Kashmir dispute.

Addressing the 42nd session of the United Nations Human Rights Council (UNHR) in Geneva on September 10, this year, Pakistan’s Foreign Minister Shah Mahmood Quereshi urged the UNHRC “to constitute a commission of inquiry for an investigation into blatant and grave human rights violations in occupied Kashmir”.

Quereshi elaborated: “The basic and inalienable human rights of Kashmiri people are being trampled with impunity by India…over 6,000 people…have been arrested, without due process of law. Many of them have been forcibly shipped to jails all over India, under draconian laws operative in Indian Occupied Jammu & Kashmir…New Delhi has turned Kashmir into the largest prison…India can once again resort to false-flag operations, and use the bogey of terrorism to divert international attention from atrocities in occupied Kashmir…illegal occupation of Muslim-majority Kashmir region can drive the two nuclear-armed countries into an accidental war”.

It is mentionable that Pakistan achieved a biggest success when 50 countries supported Pakistan’s stance on Indian Held Kashmir in a joint statement delivered at the UNHR in Geneva on September 10, 2019. The joint statement said: “It shares the concern expressed by the High Commissioner for Human Rights Michelle Bachelet regarding the impact of recent actions on the human rights of Kashmiris…the UN Secretary-General Antonio Guterres, the Office of the High Commissioner for Human Rights [OHCHR], UN Special Procedures in their joint press release of 22 August 2019, civil society organizations and international media have repeatedly expressed serious concerns about the unprecedented restrictions and on the continuous curfew imposed since fifth of last month, curbing of fundamental freedoms, communications blackout and reports of wide spread torture, extrajudicial killings, arbitrary arrests, molestation of women, and enforced disappearances”.

It quoted UN Secretary-General António Guterres statement on 8th of last month that said: “The position of the United Nations on this region is governed by the Charter of the United Nations and applicable Security Council resolutions”. This position of the UN Secretary-General has also been corroborated by OHCHR‘s Kashmir Reports.

Pakistan’s Prime Minister Imran Khan have repeatedly stated the inaction by the international community, particularly the West’s major powers who have financial interests in India could lead to conventional war which could be culminated into nuclear war between the two countries.  Especially, on August 15, 2019, Prime Minister Imran has warned the international community of “severe repercussions and reactions”, if they “silently witness another Srebrenica-type massacre & ethnic cleansing of Muslims in the occupied Kashmir”.

In his interview with Russian TV Channel RT on September 13, 2019, PM Imran Khan once again pointed out that the Indo-Pakistani standoff took a turn for the worse after New Delhi revoked the decades old autonomy of the part of disputed Kashmir it controls. Khan urged the world community to help preventing the conflict from spiraling into “a nuclear hotspot” with “unimaginable” consequences.

In his interview with Al Jazeera TV channel on September 14, this year Premier Imran Khan warned by saying: “Pakistan would never start a war, and I am clear: I am a pacifist, I am anti-war, I believe that wars do not solve any problems…When two nuclear-armed countries fight, if they fight a conventional war, there is every possibility that it is going to end up into nuclear war…Eight million Muslims in Kashmir are under siege…and why this can become a flashpoint is because India is trying to divert attention from illegal annexation and genocide in Kashmir”.

Undoubtedly, we can conclude that by exposing India’s blunders, Pakistan internationalized the Kashmir issue.