[ Editor’s Note: This ditching the dollar trend is going to grow, as key countries that are getting it started will be joined by others, initially those already in the current trading groups they are doing business with.

VT predicted that this would be an obvious and permanent response to the gangster style punishment dolled out by the Treasury department, which was obviously going to be viewed as a long term financial security threat to anyone that dared stand in the path of a unipolar world led by the US.

We might have a more qualified and reasonable president some day, but everyone knows that there are a lot of Trump wannabes out there waiting for the Deep State to put them on the main stage when the time is right.

This partner-country currency trading will be followed by a new SWIFT analog payment vehicle, so countries cannot be held hostage to blocked wire transfers.

As the US business and trade weapons get dulled, watch closely to see a growing trend toward using military power. VT has long predicted that it would precipitate a showdown between the NeoCon swamp monsters and a command structure that does not want to openly become a mercenary force for the Deep State.

But the big problem there is the guys can be fired in a jiffy and replaced by a sell out. The military brass is filled with a pool of people willing to serve. We will be watching that fight closely; but that will be hard to do, as the good guys do not openly expose themselves, and wisely so… Jim W. Dean ] 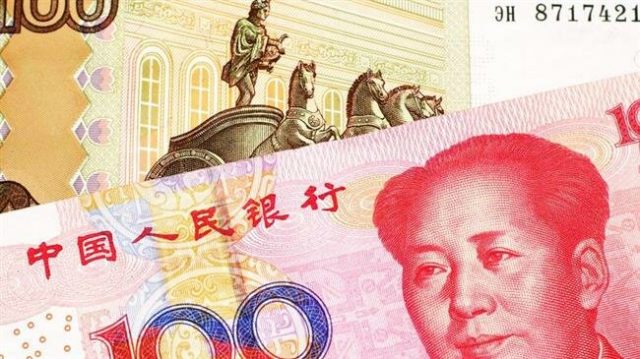 Iran and Russia have ditched the dollar and are now carrying out all their transactions in national currencies, Iran’s Central Bank Governor Abdolnaser Hemmati says.

“This trend is gradually removing the dollar from the trading cycle, with many countries now willing to trade in their national currency so that the US does not oversee their trade,” Hemmati added.

On Friday, the United States imposed another round of sanctions on Iran’s central bank, but analysts cast doubt on their effectiveness because Iranian banks are already cut off from the American financial system.

The US Treasury Department  said the sanctions target the Central Bank of Iran, the National Development Fund of Iran and Etemad Tejarate Pars Co.

US President Donald Trump said the sanctions were the highest ever imposed on a country, while Treasury Secretary Steve Mnuchin boasted Washington had cut off “all source of funds to Iran”.

The sanctions, championed by former national security adviser John Bolton who was ousted this month, are part of the US “maximum pressure” campaign to force Tehran over its nuclear program and influential regional role.

Hemmati said the fresh sanctions were a “psychological” attempt, which would not change anything.

“The fact is that we have serious problems in terms of banking, but we have found other ways to do our work,” he said.

“I think the renewed sanctioning of the central bank is aimed at creating a psychological atmosphere. Nothing new will happen and we are doing our job,” Hemmati added. “If they sanction us four more times, it will have no new effect.”

In the future, Iran will establish business, financial, and banking relationships using methods other than those considered the United States, the governor said without elaboration.

Across the world, a campaign is gaining momentum to break the dollar’s hegemony. Big oil producers such as Russia as well as major consumers China and the European Union have been calling for moves to diversify global trade away from the dollar to dilute US influence over the world economy.

Russia, which is subject to US sanctions, has tried to sell oil in euros and China’s yuan. Venezuela and Iran, which are also under US sanctions, sell most of their oil in other currencies. Ditching the dollar would undermine its status as the world’s main reserve currency, reduce Washington’s clout in global trade and weaken its ability to enforce sanctions on nation states.

Earlier this month, Russian broadcaster RT said Moscow plans to issue its first yuan-denominated bond as the country is working with China to cut reliance on the US greenback.

Beijing and Moscow have been planning yuan bonds since 2016, but the plan has been postponed several times. According to RT, Russia now expects to issues its first sovereign debt in the Chinese currency, officially called renminbi, by the end of the year or early next year.

As tensions escalate with the US, world countries are becoming increasingly worried about Washington using global reliance on the dollar as a weapon.

Iran is additionally aggrieved by a serious plunge in the value of its national currency, the rial, which hit a historic bottom last year amid a flurry of panic buying of the greenback in the country.

According to US news magazine Foreign Policy, social media networks played a key role in stoking fears of an economic downturn which prompted some families to convert their savings into dollars and euros after Iran came under intensified American sanctions.

Prior to the sanctions, one US dollar was trading at 37,000 rials but immediately afterwards, it rose to 190,000 against the Iranian currency. The rial has regained some of its value since September 2018, when the central bank released more dollars into the market and authorities cracked down on currency dealers.

On Wednesday, a dollar was selling for 11,250 rials on the unofficial market, unchanged from the previous day. Hemmati said the foreign exchange market is under the government control, dispelling claims of “calm before a storm”.

“There is full control over the currency market. The trend of non-oil exports continues and the constant supply of currency through (integrated forex platform) NIMA is underway,” he said.