[ Editor’s Note: The US snub of denying official Russian UN representatives visas for attending pertinent topic meetings during this session has continued the self-denigration of the US in the world’s eye.

Being the host of the UN requires impeccable good manners, which seems to be in short supply inside the Trump regime, and an indication that the Russians are not the close buddies with Mr. Trump as many suggest.

If the US cannot be an unbiased UN host then, it is time for it to step aside and let a new candidate take over. Heaven knows there are many who would love to be host. I wonder if anyone took a look at the original agreement to see what hosting obligations the US was contracting to provide, or was it one of those “we paid for it so we run it our way”.

Was this just another step in the unipolar power’s march across the planet carrying a big stick like Teddy Roosevelt? If there are any boundaries that the US would accept I can’t see them any more.

We have a growing trend that there is no agreement that the US would not consider breaking, if it wanted to for some reason. Maybe when the US signs new agreements, an addendum should be required to show all the ones it has broken and then a release for the cosigners all stating that they are aware but still would like to co-sign… Jim W. Dean ] 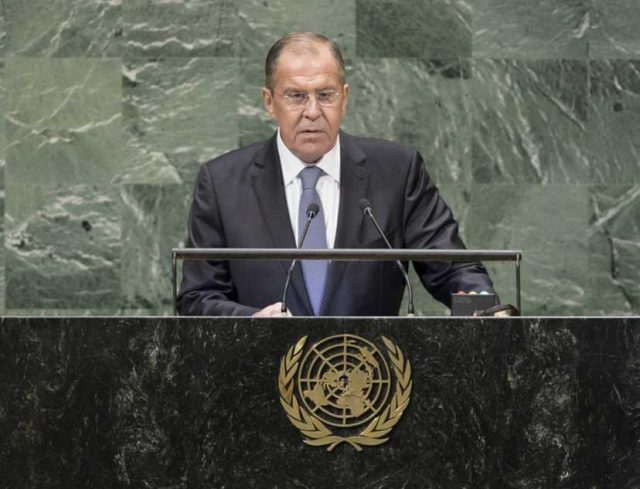 In light of a US refusal to issue visas to a part of the Russian delegation traveling to participate in various activities of the UN General Assembly, Foreign Minister Sergey Lavrov suggested that the time had come to raise the question of the location of the UN headquarters.

“When a visa was not issued to the head of the relevant Non-Proliferation and Arms Control  department, who was supposed to go to a meeting of the UN Disarmament Commission in April this year, we formally proposed not to hold a Commission session in the United States, if all delegations were not entitled to send the person who is considered necessary to promote their positions and defend their interests.

Now, apparently, we will have to raise the question of what to do with the UN headquarters”, Lavrov said in an interview with Russia’s Kommersant newspaper.

Lavrov promised that Moscow would respond harshly to Washington’s refusal to issue visas for part of the Russian delegation traveling to the UN General Assembly.

“Of course, we will react harshly, try to respond. Such rudeness cannot be tolerated”, Lavrov said, adding that the Russian side “will figure out how to answer” as Americans also travel to Russia.

Notably, the head of Russia’s State Space Corporation Roscosmos, Dmitry Rogozin, was on the list of those denied an entry visa into the US.

“Visas were denied to ten of our employees. This is only from the Foreign Ministry. They also denied visas to [Russian lawmakers] Leonid Slutsky and Konstantin Kosachev, who traveled to the United States many times, as well as to Dmitry Rogozin, who wanted to take part in events dedicated to cooperation in space exploration”, Lavrov said.

On Wednesday, Russian Foreign Minister Sergey Lavrov thanked his Japanese counterpart, Toshimitsu Motegi, for his help in getting a US visa for the Russian UNGA delegation’s interpreter.

Russian Foreign Ministry spokeswoman Maria Zakharova said on Tuesday that several members of the Russian delegation did not receive visas to participate in the high-level week of the 74th session of the UN General Assembly, which runs from September 24-30 in New York.

In total, 10 members of the delegation did not receive their visas, including senior lawmaker Konstantin Kosachev and the head of the Russian State Parliament’s International Affairs Committee, Leonid Slutsky.

Kremlin spokesman Dmitry Peskov said that the situation demanded a tough reaction from Moscow and the United Nations, adding that the visa refusal was a direct violation of Washington’s international obligations.

The 1947 Headquarters Agreement between the United Nations and the United States regulates the accessibility of the UN seat to non-US citizens, among other provisions.

Moscow Working With US Lawyers on Lawsuit Over Russian Diplomatic Property

Lavrov has called the situation with seized Russian diplomatic property in the United States “highway robbery” and said that the Russian side was working with US lawyers and was preparing this case for court hearings.

“We have arguments, and not a few. We are working with US lawyers. We will continue to prepare this case for court hearings. US justice and legal proceedings are a very bureaucratic thing, it requires calculation of all the options”, he told the Kommersant newspaper in an interview.

The situation with property is a “highway robbery”, the minister stressed, adding that Russian diplomats have advanced Moscow’s position in the UN Committee on Relations with the Host Country.

“The Americans […] do not want to resolve this situation, which is, obviously, unlawful and violates all conceivable conventions”, he said.

In December 2016, Washington expelled 35 Russian diplomats and blocked access to two Russian diplomatic compounds in response to Russia’s alleged meddling in the US presidential election, which Moscow has consistently denied.

In September 2017, the United States shut down Russia’s Consulate General in San Francisco and trade missions in New York City and Washington DC. US officials said the move came in response to Moscow’s decision in late July to reduce the number of US diplomatic staff in Russia to 455 people, the same number of diplomatic personnel Russia has in the United States.

After Russian diplomats left the diplomatic compounds, US security agents entered the premises to conduct searches. Moscow said that the actions of the United States constituted a violation of international law, including the Vienna Convention on Diplomatic and Consular Relations.

US Demands on INF Treaty ‘Boorish’

Lavrov also told the Russian-based media outlet that Washington’s demands – with regard to the destruction of all missiles that allegedly violate the Intermediate-Range Nuclear Forces (INF) Treaty – are “boorish”.

“We invited the Americans to show them this missile, offered to conduct a special briefing for them. But they categorically refused the invitation. The US will be satisfied only by the complete destruction of missiles, launchers and all associated equipment under US monitoring. This is a rather boorish position”, Lavrov said.

“And not only did they refuse to come to the testing range to have a look at this missile – they forbade their NATO allies to go there”, the minister stressed.

According to Lavrov, all this was done to accuse Russia of violating the INF Treaty and ensure the collapse of the agreement.

The INF Treaty, signed by the United States and the Soviet Union in 1987, was terminated on 2 August at the US initiative after the country formally suspended its INF obligations six months earlier.

Both the United States and Russia have repeatedly accused each other of violating the deal, which required the signatories to eliminate and permanently forswear all of their ground-launched ballistic and cruise missiles with ranges of 500 to 5,500 kilometers (310 to 3,417 miles).

Russian Foreign Minister Sergey Lavrov also commented on the issue of a Russian military base in Belarus.

“This is really an unpleasant episode. But the main thing is not the form, but the content. And as for the content, the President of Belarus Alexander Grigoryevich Lukashenko has repeatedly said, including answering the question about the base, that Belarus is Russia’s 100-percent ally and that the Belarusian armed forces need to be viewed as protecting our common interests and our common territory”, Lavrov said in an interview with Kommersant.

Moscow and Minsk have been discussing the possibility of deploying a Russian airbase in Belarus for a long time. But in October 2015, Belarusian President Alexander Lukashenko stated that neither Minsk nor Moscow needed the deployment of a Russian airbase from a military point of view, and called the media hype “political”.

In 2018, Lukashenko said that he saw no need for a Russian military base in the country as Minsk could ensure its own security within a military and political alliance with Russia. However, the Belarusian president stressed that Minsk would need new weapons, including missiles, in case NATO boosts its activities in the Eastern flank and the United States sets up a US military base in Poland.

Warsaw is currently seeking to build up a permanent US military presence in Poland. At a September 2018 meeting with Polish President Andrzej Duda, US President Donald Trump said that his administration was considering establishing a base in Poland.

Trump also stated that Warsaw had agreed to pay more than $2 billion toward the cost of the base. The Polish president, in turn, humorously suggested that the base be called Fort Trump.

Lavrov said that he supported the idea of resuming flights between Russia and Georgia, as the Georgian people were coming to understand that the provocation against Moscow was pointless.

“I would like the flights to be resumed. I think that would be a right move after the majority of Georgians had understood that the provocation, staged in the Georgian parliament during the Interparliamentary Assembly on Orthodoxy, had been counterproductive”, Lavrov said.

Violent protests erupted in Tbilisi on 20 June after a Russian lawmaker took the speaker’s seat to address an international parliamentary forum on Orthodoxy in Georgia’s legislature.

The unrest subsequently grew into an opposition rally, with activists demanding that the Russian delegation leave the parliament and calling for resignation of several Georgian officials. The clashes left 240 people injured and over 300 more detained.

Russia suspended direct flights to and from Georgia indefinitely starting 8 July over security concerns after a wave of anti-Russian protests in Tbilisi.