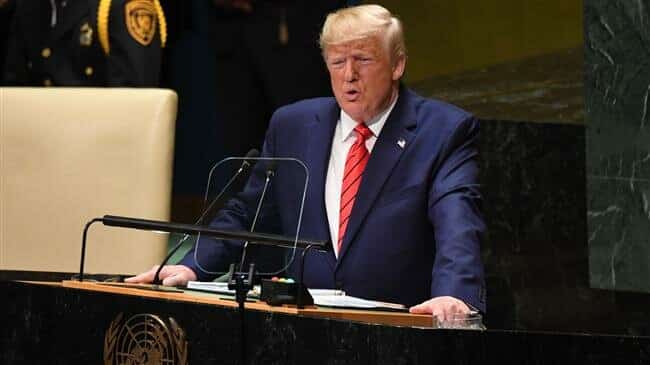 [ Editor’s Note: Trump did his expected “reality TV, à la Roy Cohn” routine at the
UN yesterday. Cohn had trained him early on that in any dispute you remain on the attack constantly. Cohn had a long successful career doing that until AIDS caught up with him. Donald somehow was spared.

The problem with Trump’s approach is that it assumes the public is all stupid, including that we cannot even read. And because he sticks with the same old false and exaggerated claims, it just shows he is carrying someone else’s water or is too lazy to learn a new script.

Dear Donald, I know you hate in-depth briefings, but you need to get one on how much has been published about US activity in using proxy terrorism as a main foreign policy tool. VT can easily do quite a presentation for you, but of course we would want to air it live.

We can flowchart it for you, show you where some of the training camps are, where the weapons have come from, and much of it paid for by the US taxpayer, and the private military Frankenstein that has now been let loose upon the planet. Who knows, maybe we could even work this into your impeachment hearings.

To accuse Iran of backing terrorism in Yemen after you led our country into being a party to the war crime that has been going on against the Yemeni people has disgraced this nation. As with Jeffery Epstein, you will not be able to wash the stain off.

Obama probably killed more Syrians than you, but you are catching up fast. Roy Cohn would be proud. You sir are on your way to being a legendary US president, but not for the reasons that you think.

Whether you win or lose in 2020, your true record is being carved in stone by your own hand. Roy is not here to save you … Jim W. Dean ]

Iran’s President Hassan Rouhani has blasted the United States for sponsoring the terrorists who have been wreaking havoc across the Middle East, saying terrorism has only expanded in every country Washington has set foot.

In an interview with Fox News’ Chris Wallace on Tuesday, Rouhani expressed surprise at US President Donald Trump’s highly hostile accusations during his UN speech, in which he called Iran “the world’s largest state sponsor of terrorism.”

Trump also accused Iran of adopting a “menacing behavior” and claimed that the country was “fueling the tragic wars in both Syria and Yemen.”

In response, Rouhani said he was “amazed at the interpretations of Mr. Trump, vis-a-vis terrorism,” and that unlike the US president’s claims, “Wherever we have gone, we have defeated terrorism.”

“Today, America, unfortunately, is the supporter of terrorism in our region — and wherever America has set foot, terrorism has expanded in its wake,” Rouhani said.

The Iranian chief executive also described Washington’s bombing campaign in Syria as an example of American terrorism in the region.

“The country that is present and flying over the air space of and bombarding the soil of the country of Syria without permission of the government is the United States of America,” he said.

Rouhani denounced the harsh economic sanctions that the US has imposed on the Iranian nation as another type of terrorism, which has made life difficult for civilians, especially children and patients.

Elsewhere in his interview, the Iranian president censured Trump for further undermining trust between the two countries by pulling the US out of a multilateral 2015 nuclear deal and re-imposing sanctions on Iran.

Asked if there was any chance that the two leaders would meet on the sidelines of the annual General Assembly summit, Rouhani said,

“Why would we bump into each other? If we seek to pursue higher goals to benefit both countries, both people, it must be planned, and talks must be based on those plans.”

“But, prior to that, we must create mutual trust, and that trust is something that Mr. Trump took away from this framework. We had an agreement. Mr. Trump exited without a valid justification, and illegally, from an international agreement. So, if the United States of America’s government is willing to talk, it must create the needed conditions,” he added.

A key way to rebuilding trust between Tehran and Washington would be lifting the sanctions the US imposed on Iran after leaving the nuclear deal, he said, noting that such a measure could lead to diplomacy between the two countries.

“Trust must be restored, and the restoration of trust consists in taking away the pressure imposed upon the nation and the people of Iran,” he pointed out. “This is a type of terrorism. This is inhumane, and if there is a cessation to this, then, of course, the atmosphere will change. Of course, then it can be envisioned, and we can talk about many different topics of mutual interest for both sides.”

During his UN speech, Trump threatened Iran with even more strict sanctions.