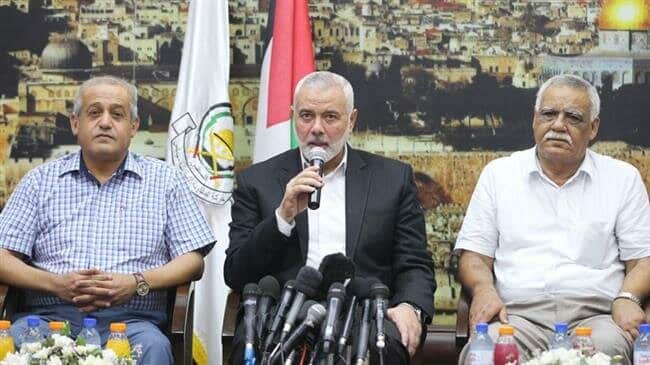 [ Editor’s Note: Well this came out of nowhere, and not a minute too late. Effective Palestinian resistance had literally been on its knees while the various groups were divided, a huge impediment for getting better international support.

As I watched the fake Deal of the Century horror story unfold, and the Palestinians continuing to boycott each other, I was beginning to resolve myself to their being the eternal slave labor pools for the Zionist Crypto-Jews, the ones that don’t have any more ancient Holyland DNA than I do.

This summer curious Jim, at the suggestion of Dr. Erin Elhaik, VT’s unofficial in-house geneticist, had DNA Consultants do a new triple ancient DNA testing for me on Ice Age Europeans, Ancient Britons in Roman Britain, and Ancient Israelites.

The latter was a pool of about a dozen remains that had been sequenced. I matched 7.45% with the pool, and the highest single match being 8.43% with a young boy found in one of the caves, around 6500 BC.

I am waiting for all the Likud party to take the test and publish their results, but have no plans to apply for Israel citizenship and an absentee voter registration card. But that said, the Jewish mother requirement might be a hurdle for me.

As long as the US and Israel both have their boots on the Palestinian neck I do not see much hope for change. We see no civic opposition to the Christian Zionists here, especially in the religious community, other than maybe the Quakers.

As the US continues to be viewed as isolating itself internationally, we do not see it happening yet to Israel. But the Zios are trying to cut the herd off at the pass by getting any opposition to Israeli policy deemed an act of hate so those laws on the books can do the suppression dirty work for them… Jim W. Dean ]

The Palestinian Hamas resistance movement says it has “unconditionally and fully” endorsed a recently-proposed initiative by major Palestinian factions to heal the existing inter-Palestinian division and achieve national unity.

In a statement announced during a meeting with leaders of major factions in the besieged Gaza Strip on Thursday, the Hamas leadership said it had received on September 19 a national vision for putting an end to the current rift.

Ismail Haniyeh, the head of Hamas Political Bureau, affirmed that the Hamas leadership both at home and abroad studied the proposal out of its responsibility and great keenness to achieve national unity among Palestinians and decided to accept it “unconditionally and fully.”

“In recognition of the factions’ sincere and honest efforts and out of our awareness of the dangers and challenges surrounding the [Palestinian] cause and threatening its constants, the Islamic Resistance Movement, Hamas, declares its approval of the factions’ initiative while rising above its observations on the initiative in order to make it succeed,” the Hamas statement further read, as quoted by the Palestine Information Center.

The resistance movement also pledged to make every effort and remove all obstacles for the success of the initiative.

Early this month, Haniyeh warned that the Israeli regime was seeking rifts among Palestinians and Palestinian resistance groups to distract them from their main priorities.

The senior Palestinian official said Israel was after gaining benefits from insecurity in Gaza in order to thrive in September elections.

Palestinians have held weekly rallies along the Gaza fence to protest the siege on the enclave and demand the right for the refugees who were forced to leave during the 1948 creation of Israel to return to their homes.

At least 307 Palestinians have been killed by Israeli forces ever since anti-occupation protest rallies began in Gaza on March 30, 2018. Over 16,000 Palestinians have also sustained injuries. Gaza has been under the Israeli siege since June 2007, which has caused a decline in living standards.

Israel has also launched three major wars against the enclave since 2008, killing thousands of Gazans each time and shattering the impoverished territory’s already poor infrastructure.