Saudi authorities are going to execute dozens of imprisoned political dissidents from the country’s oil-rich and Shia-populated Eastern Province, amid a crackdown led by Crown Prince Mohammed bin Salman against pro-democracy campaigners, Muslim preachers and intellectuals in the ultra-conservative kingdom.

The report added that five detainees are already on the death row, while nine others have been sentenced to death. Another 26 inmates are facing  death penalty at a request from the Public Prosecution. 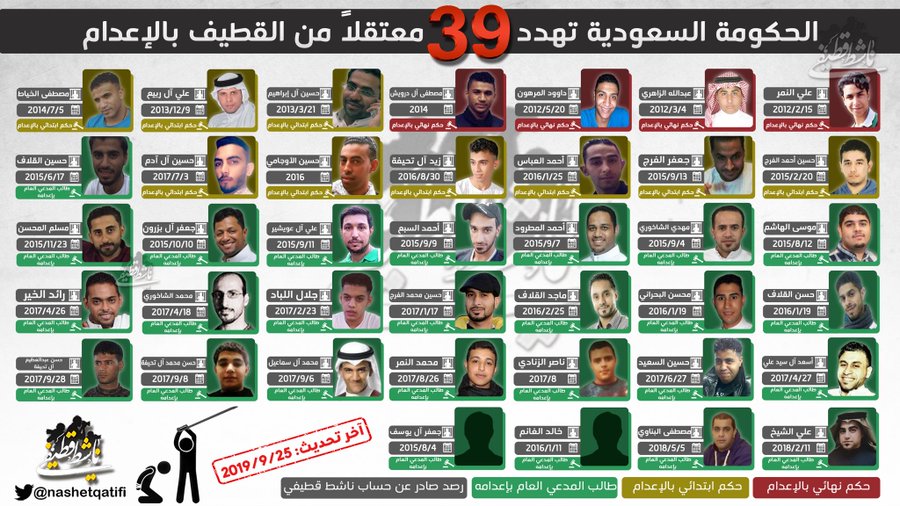 Eastern Province has been the scene of peaceful demonstrations since February 2011. Protesters have been demanding reforms, freedom of expression, the release of political prisoners, and an end to economic and religious discrimination against the oil-rich region.

The protests have been met with a heavy-handed crackdown by the regime, with regime forces increasing security measures across the province.

Back in mid-July, informed sources, requesting anonymity, said that a young Saudi man had died more than a week after being injured by regime forces when they raided a district in the province.

A young Saudi man has died of injuries he suffered after regime forces raided al-Jash district in al-Qatif region.

PressTV-‘Dissident dies of wounds from regime raid on Qatif’

A Saudi political dissident has died more than a month after being shot and injured during a raid on the kingdom’s Shia-populated Qatif region.

The sources added that the forces fired indiscriminately, inflicting damage on many houses and buildings. Adam suffered critical injuries during the raid.

Over the past years, Riyadh has also redefined its anti-terrorism laws to target activism.

In January 2016, Saudi authorities executed Shia cleric Sheikh Nimr Baqir al-Nimr, who was an outspoken critic of the Riyadh regime. Nimr had been arrested in Qatif, Eastern Province, in 2012.