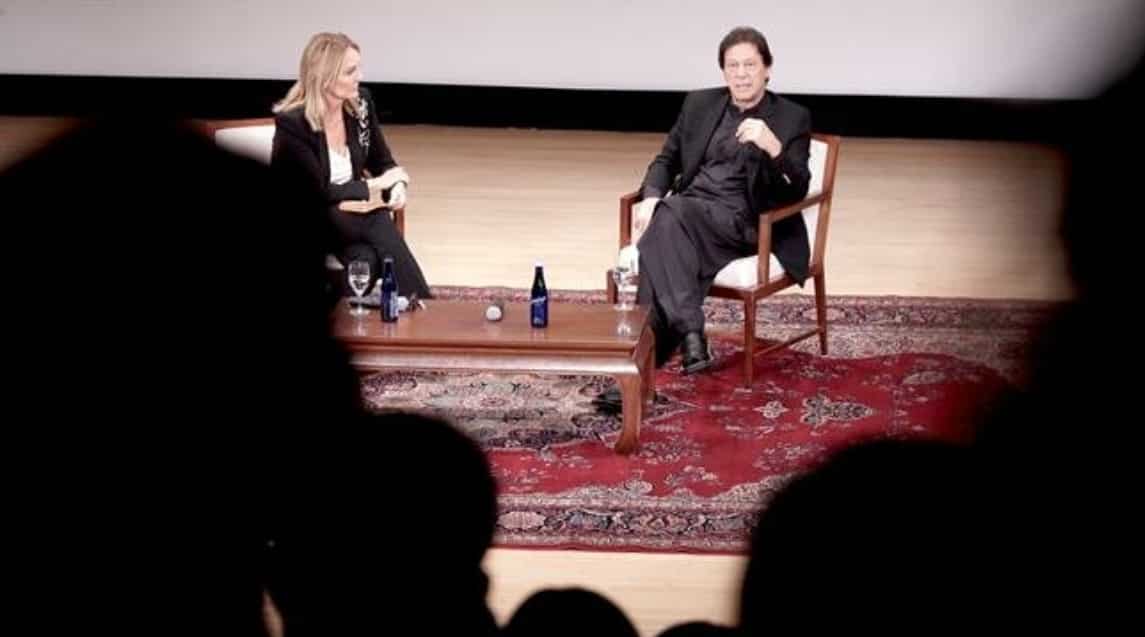 Pakistan will not recognize Israel until there is a homeland for the Palestinians, Pakistani Prime Minister Imran Khan said during an event at the Asian Society in New York City on Thursday evening.

Responding to a question from Middle East Eye over speculation that Pakistan was considering a foreign policy shift towards Israel, Khan, who is currently in the United States to attend the United Nations General Assembly, said he was not aware of where these reports were originating from.

Over the past month, speculation has been rife that Pakistan may be open to forming formal relations with Israel due to the re-configuring of relations between the Persian Gulf nations and Israel, particularly Saudi Arabia and the United Arab Emirates.

Social media has also been abuzz with debate and discussion, with some arguing that Pakistan’s economic woes may require it to form new allies.

But Khan was unequivocal in his reply.

“Pakistan has a very straightforward position. It was our founder of Pakistan Quaid-i-Azam Muhammad Ali Jinnah who was very clear that there has to be just settlement, a homeland for Palestinians before Pakistan can recognize Israel,” he said to rapacious applause.

The debate mostly began in early September when Kamran Khan, President and Editor-in-Chief for the Dunya Media Group, asked on Twitter: “Why can’t we openly debate pros cons of opening direct and overt channels of communication with Israel?”

The tweet was interpreted by many as an attempt to test Pakistani public opinion about Israel.

Kunwar Khuldune Shahid, a Pakistani journalist, wrote in The Haaretz that the tweet showed “the once-taboo subject of Islamabad probing potential relations with Israel has undergone a sea change – and is now entering the mainstream discourse.”

During a press conference some days later, Pakistan’s military denied that the country was changing course on Israel, before directing further queries to the foreign office.

“As far as my visibility goes, nothing of the sort is happening. But this is a question related to the foreign office,” the spokesperson said.

Pakistan’s Minister of State for Parliamentary Affairs Ali Muhammad Khan says his country will never recognize Israel, which he said is the Pakistani nation’s “number one enemy.”

This led to further debate without any intervention or clarification from Pakistan’s Foreign Ministry.

Questions over Khan’s approach to Israel began in October 2018 when a report circulated saying that an Israeli jet had landed in Islamabad for 10 hours, leading to wide-scale speculation that Israeli Prime Minister Benjamin Netanyahu may have visited the country.

Three witnesses from the Noorkhan air base confirmed the pilot’s account and said they saw a car picking up a delegation at the steps of the plane. The developments almost prompted a political crisis for Khan.

Though Pakistan has never recognized Israel formally, it is understood that the two countries have met behind the scenes, even discussed the possibility of forming diplomatic relations.

Though Khan has remained adamant that his trip to the UN is primarily focused on raising awareness about India’s descent into Hindu fascism and the weeks-old blockade of Kashmir, he has also been roped into other pressing issues during his visit.

A senior UK analyst believes Israel’s fingerprints are all over India’s escalating conflict with Pakistan.

With Pakistan enjoying strong ties with Saudi Arabia and friendly ties with Iran, Khan said that he had been approached by US President Donald Trump to help mediate with Iran.

“President Trump asked me if we could de-escalate the situation and maybe come up with another deal. So, I did convey this (to Iranian President Hassan Rouhani) and yes, we are trying our best. It’s an ongoing thing so I can’t reveal more than that,” Khan told reporters on the sidelines of the UN General Assembly.