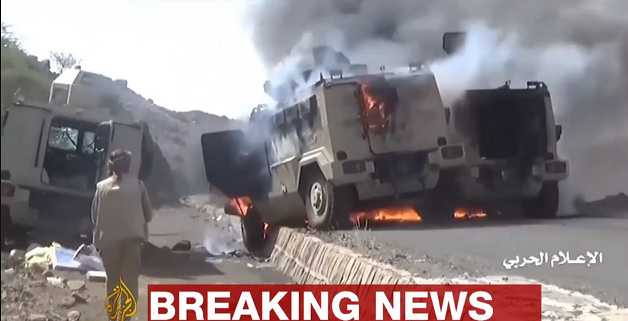 [ Editor’s Note: This was certainly a major victory for the Houthis, but missing in the early reports today are any footage of captured Saudi officers, especially high ranking ones. One would think they would be at the top of the video.

All the Saudi troops in the videos are pro-Hadi side, hired rag-tag mercenaries who don’t even have uniforms. Yesterday’s news was also confusing as to whether this was a large Saudi-led invasion force as a retaliation for the Aramco attacks.

Today the story is presented as an attack on Saudi fixed positions, pushing them out of hundreds of square kilometers of territory. Yesterday, we saw footage of Saudi columns looking like they were being ambushed as they moved forward; today it looks like they were attacked while fleeing.

We suspected that the Houthis opened their attack from the front and both sides, leaving Sun Tzu’s “golden bridge open to retreat. When the Saudis saw what was happening, they jumped into their MRAPS and took off. The Houthis were waiting for them, with a shooting gallery lined up.

The mercs left behind of course threw up their hands and surrendered. Those having trouble looking for someone to surrender found themselves getting bombed by Saudi planes as they were indistinguishable from the Houthis from the air.

When you have a large force in the field, constant patrolling along all of your lines is standard procedure to know where your enemy is, especially in mountain land, in case you have to make a move. Are we seeing more proof of lazy, fake, Saudi officer corp fiascos which have been coming out in the news more?

You will see a devastating Saudi military defeat in the video below, but you will have to sign into Google to go through the over-18 process. You will see IEDs blowing up passing armored vehicles, MRAPS that did not work. Maybe they were “seconds” sold to the Saudi military.

So far we have Houthi reports of 500 killed and wounded, and 3000 prisoners, with the term “three brigades” used, which means nothing, as the troop in a “brigade” can vary greatly. But a regiment of Saudi soldiers, obviously the armor, is mentioned; but a handful shown in the video footage

Expect to see little coverage of this in detail in Western media. The Saudis have a wide financial footprint and their Israeli friends will clampdown the media for them. As Gordon does so love to say, “Welcome to how the world really works.”… Jim W. Dean ]

Yemeni Army has released the footage of a large-scale military offensive carried out by Yemeni soldiers and allied fighters from Popular Committees in Saudi Arabia’s southern border region of Najran, where three Saudi military brigades were completely destroyed and thousands of militiamen taken hostage.

Speaking at a press conference in the capital Sana’a on Sunday afternoon, the spokesman for Yemeni Armed Forces Brigadier General Yahya Saree termed the operation, dubbed Victory from God Almighty, as the biggest ever since Saudi Arabia and some of its allies embarked on an atrocious military campaign on Yemen more than four years ago.

The footage released by Yemeni forces starts with a description of the geographic location of the operational theater, showing Yemeni forces firing shells at the positions of Saudi forces and Saudi-sponsored Yemeni militiamen loyal to Yemen’s former pro-Saudi president, Abd Rabbuh Mansur Hadi.

It then shows Saudi soldiers and their mercenaries fleeing the area on board pickup trucks and armored personnel carriers. Yemeni soldiers and allied fighters from Popular Committees do not hesitate to target the fleeing Saudi forces and mercenaries, setting a number of their military vehicles ablaze.

The video then shows several armored vehicles overturned, and dozens of Saudi troopers surrendering to Yemeni forces with both their hands raised in air.

There were dozens of bodies strewn everywhere.

Some captured Saudi-backed militiamen said they had been paid and lured by the kingdom in order to participate in battles against Yemeni army soldiers and Popular Committees fighters, other owned up to having been forced to fight in Yemen.

The video footage went on to show captured Saudi-paid Yemeni militiamen and Saudi soldiers walking in droves, as Yemeni paramedics provided first aid to the injured prisoners of war while cleansing and dressing their wounds.

In another part of the video, Saudi military aircraft are seen hovering in the skies over the area, firing a barrage of missiles.

The spokesman for Yemeni Armed Forces highlighted that almost 200 Saudi troops lost their lives as a result of the operation in Najran.

The footage concluded with showing considerable amounts of various munitions and weapons, including assault rifles and cartridge boxes, seized from Saudi soldiers and their mercenaries.

Saudi Arabia and a number of its regional allies launched a devastating campaign against Yemen in March 2015, with the goal of bringing the government of Hadi back to power and crushing the Houthi Ansarullah movement.

The US-based Armed Conflict Location and Event Data Project (ACLED), a nonprofit conflict research organization, estimates that the war has claimed more than 91,000 lives over the past four and a half years.