Money is not just the change in your pocket, it is a Universe in itself

[ Editor’s Note: We have been getting whispers of financial charting indicating that what happened before the last bad crash is circling back around on us. So, we are going to start covering the financial markets more closely, as mass media tends to cover these stories after the shoe has fallen and it is too late to save yourself.

As is often the case here at VT, while we look for good talent all the time, sometimes it walks right in the door, as it did with Mr. Barman. Below you have his introduction for a series he is doing for VT to explain what he sees happening in layman’s terms, so regular folks can be more aware and have time to anticipate what might happen.

If you have questions, ask him in the comments, as we are all in this together if a big crash comes again. VT readers are well-versed in the huge debt loads being carried by countries – the US leading the way with its ability to create money out of thin air to prop things up in a critical situation, which is a good thing.

Here is what caught my attention really fast from one of Supratim’s work, “The constant Repo Liquidity Injection in terms of Emergency Overnight Funding for banks is now at 75 billion US Dollars per day, whereas the entire QE operation in 2008 was 75 billion dollars per month”

I bolded the $75 billion a day for a good reason. Ask yourselves, how long do you think that can go on without a day of reckoning? Who is going to be whooshed down the toilet when the bottom falls out? … Jim W. Dean ] 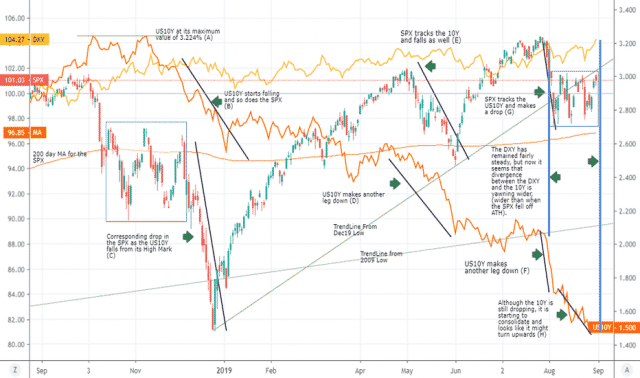 We are living in a time of great change, where events around us are unfolding with rapid precision; as if we are being flooded within an information tsunami; making it difficult to balance our perspective and have a clear understanding of the real situation around us.

The constant 24/7 news cycles, along with the incessant and intrusive nature of social media makes it near to impossible to fathom what is truly important and what is a distraction.

What we are witnessing is a tectonic shift in the global financial system, that just about survived a phenomenal crash in 2008; and is now, just held aloft by highly leveraged companies; fed by cheap Central Bank credit and banks that are again just being kept alive on a 24-hour cycle by a process referred to as Emergency Liquidity Provision or Repo Financing.

The entire financial system of Planet Earth is now on the edge of a Debt Deflation Timebomb; which unlike 2008, where small businesses were destroyed and havoc reigned within the Global Housing Market, this crisis is leading to a Sovereign Debt Crisis where nations will now go under.

Over the next few articles, we hope to be able to explain in simple and clear terms, the machinations under which the Global Financial system operates, the tools that they employ, the methods and strategies they follow, the jargon they use to make it almost impossible to understand their work for an outsider.

We will also slowly dissect the inter-connected web that is the connection between Currencies, the US Dollar Index, Interest Rates, Inflation, Debt Deflation, Economic Stagflation, Bond Yields, the Balance Sheet of the US Federal Reserve and other Global Central Banks, and the famous the Curve Inversion of Negative Yields.

Within all this also falls the latest phenomena of Crypto-Currencies and the revolutionary concept of the BlockChain Technology, whose impact will magnify as this impending crisis unfolds.

We hear these words and terms being freely used by the talking-heads on the TV Channels and yet we don’t seem to have a clear grasp of what they mean and how they affect our lives.

These short series of articles will not make us competent Economists or Traders, but it will give us the power of Clear, Honest Information which will help us to make better, more educated decisions for our vision of the future for both ourselves and our families.

The main theme behind this is that, we; globally are about to enter a time of severe financial upheaval which has deep political implications, as is evident in an US Administration that seems to be tottering, a global Trade War and of course, the ever present Petro-Dollar conflict within the Middle East and the start of chaos within Emerging Markets; with implications for the Turkish and Indian Republics, as well as South Africa and Argentina.

Follow us as we ride this wave together and always be aware that it is better to know that you are running through a minefield than to think that it is a field of daisies.

Supratim Barman MSc (London)… MIEE, MBCS and MIAP in 2004. My trading ideas and commentary are visible on the Open Source Community Platform of tradingview.com . I have been trading consistently since 2004 and I live between London as a 2nd Generation UK Citizen and Kolkata within the Indian Republic where my family origins lie.