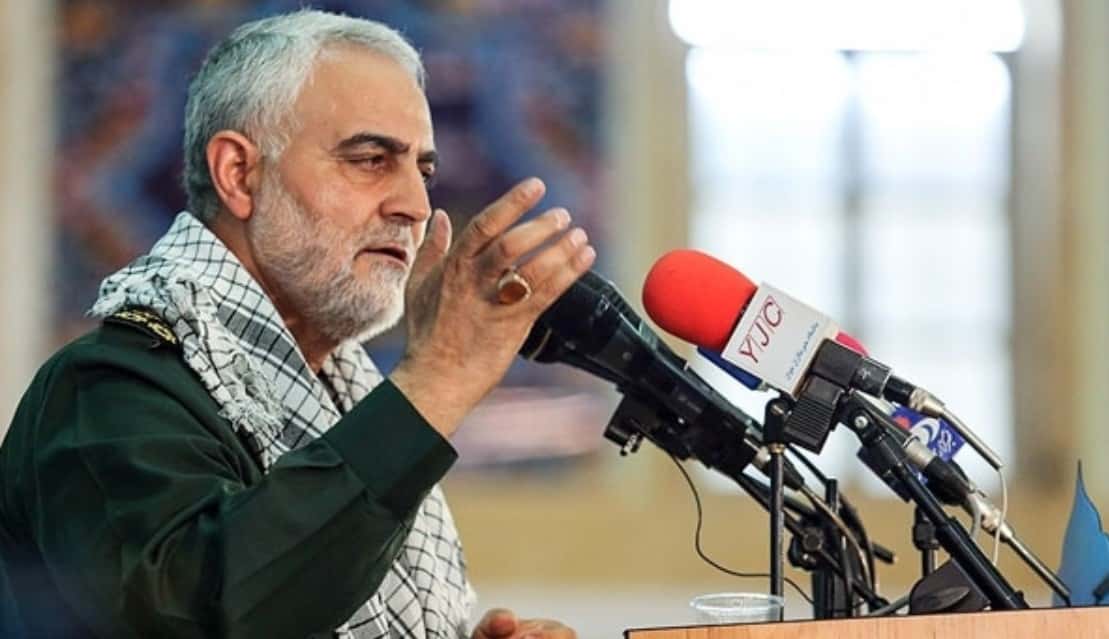 TEHRAN (FNA)- Commander of the Islamic Revolution Guards Corps Quds Force Major General Qassem Soleimani stressed that the IRGC has shattered the US military awe before the world people’s eyes.

“The IRGC has shattered the awe of the biggest and most equipped army of the world, i.e. the US army, and displayed its empty nature to the world people,” General Soleimani said, addressing the IRGC commanders in Tehran on Tuesday.

He said the way has been paved for Iran to overcome its enemies, adding that Tehran has crippled the enemy and defeated it through different strategies in the past 20 years.

In relevant remarks in July, Commander of the IRGC Aerospace Force Brigadier General Amir Ali Hajizadeh said the shooting down of a US spy drone over Iranian territorial waters by the IRGC disturbed the US military awe.

“The operation to shoot down the US drone in Iran’s sky was successful in every aspect. The operation shattered the awe of the world arrogant power (US) and displayed the rotten and cracked skeleton of the arrogant powers to everyone,” General Hajizadeh said in the Northeastern city of Mashhad.

He added that different dimensions of the operation would come in light throughout time.

The IRGC Aerospace Force shot down an American spy drone over the territorial waters of Iran near the Strait of Hormuz at dawn on June 20.

After the incident, US President Donald Trump said the US air force was “cocked and loaded” to attack three Iranian targets, but he called off the strike with 10 minutes to spare after being told that the airstrike might kill as many as 150 people.

Trump said in a series of tweets that he decided that the death toll was not a proportionate response to the Iranian shooting down of a US spy drone off the Iranian coast.

After Trump’s remarks, General Hajizadeh said that his forces could have shot down a US P8 aircraft with 35 on board which was violating Iran’s airspace, but decided to shoot down the drone to only send a message to Washington.

“We intended to send a message to American terrorists in the region,” Brigadier General Hajizadeh said, adding that his forces had also traced a military P8 aircraft violating the airspace of Iran.

“Along with the American drone was an American P8 aircraft with 35 on board, and it was also violating our airspace and we could have downed it too,” he said, adding, “But we did not do (shoot down) it, because our aim was to warn the terrorist forces of the US.”

General Hajizadeh also stressed that Iran was not after war but was fully ready to defend itself, adding that the fate of the downed US spy drone was waiting for any intruding flying object.

“Our response to anything trespassing Iranian territory is like this, and if such acts of aggression are repeated, our response will also be the same,” General Hajizadeh said.

“We don’t embrace war but we are ready to fully defend the country,” he said.

“We possess a collection of US drones which is a proof that US has violated Iran’s airspace and shows that they don’t want to respect the international law,” General Hajizadeh said.

“If such an aggression is repeated, we will add other US (military) products to complete this collection,” he noted.

“The US measure was in violation of international law and we acted according to our legitimate responsibility,” General Hajizadeh said, adding, “It is possible that a US general or some operators were behind this American aggression, we don’t know that. But that measure (intruding into Iranian airspace) is a violation of international aviation rules by a spy drone which then received our natural response.”

Also, Iranian Foreign Minister Mohammad Javad Zarif said that his country had retrieved parts of the spy drone that was shot down from the country’s territorial waters, rejecting Washington’s claim that the aircraft was targeted in international waters.

“(The) US drone took off from UAE in stealth mode and violated Iranian airspace,” Zarif wrote on Twitter, adding that the drone “was targeted near… Kouh-e Mobarak” region in the Central district of Jask in Hormuzgan province after the aircraft violated Iran’s airspace.

Zarif even provided the coordinates where the US aircraft was intercepted, and added, “We’ve retrieved sections of the US military drone in OUR territorial waters where it was shot down.”

The incident sent “a clear message” to the US and other enemies that Iran will show a firm and crushing response to any aggression, Salami stated.

“Borders are our red lines and any enemy which violates them will not go back home and will be annihilated. The only way for enemies is to respect Iran’s territorial integrity and national interests,” the major general noted.

Also, earlier this month, General Salami said Iran’s military power and might had taken the military option off the table for the US, stating that the US was fearful of war against Iran.

“We have completely blocked the road to the enemies in the military field and we have reversed the balance. Under the current situation, it is the enemies who are concerned about war and this concern is displayed in their physical and tactical behavior,” General Salami said, addressing the commanders and personnel of Khatam al-Anbia base in Tehran.

He said the US exercised a similar offensive strategy in the political field first, but “eventually, they announced that they didn’t intend to go for a confrontation and called it a quit; in fact, this was a retreat to give them a chance to save themselves from a bottleneck they had created themselves.”

“Today, our global power is very well known and credited, and it includes an extraordinary deterrence capacity; we have managed to shatter the United States’ awe in the world public opinion” on the scene of action, General Salami said.