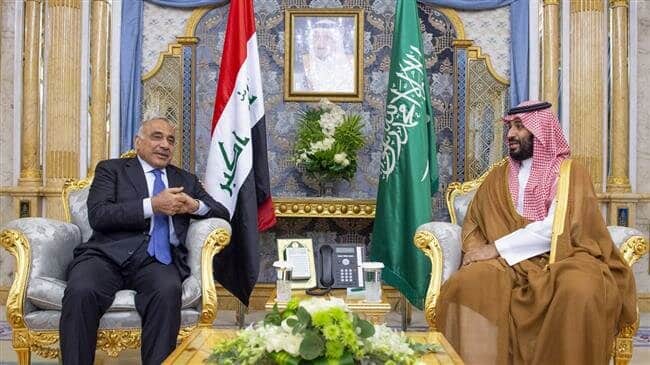 [ Editor’s Note: We could smell this coming at VT, when talk of a military response to the Aramco attack evaporated after a few days. Crown Prince bin Salman told us why, because a war with Iran would devastate the Persian Gulf and certainly all of the Gulf oil facilities, and that would topple the global economy.

We just learned last night that the Houthi campaign crushing three brigades of Saudi forces actually happened in late August; and they held back the news, which seems impossible to fathom. No explanation was given.

But we see why even the Saudis said nothing about it, as it was followed by the more visible Aramco attack. Then we had MbS saying that a war in the Gulf would bring the world economy down.

This begs the question to the Crown Prince, when did he figure this out, when all he had to do was call VT? The Aramco attack showed that all the big ticket air defenses piled into the US Gulf coalition countries can be defeated by swarm attacks of relatively inexpensive, low flying missiles.

We see now why Israel has been so concerned about Iranian drones and missiles, the updated ones getting into Hezbollah hands, and into Syria. The Aramco attack was the game changer. Think of a swarm attack like that on the Israeli Dimona nuclear facility.

Notice how, in the recent American Conservative magazine story, the US military had told the Saudis all along that the Yemen war would be their Vietnam, but was not carried by corporate news.

It will be hard for the US hawks and Israel to continue their bellicose talk against Iran if the Saudis are having talks with Iran. Bibi is distracted with internal politics, as is Trump with impeachment, and the Palestinian Deal of the Century Plan is twisting in the wind, while the Israelis continue crushing the Palestinians under their boot… Jim W. Dean ]

An Iraqi official says Saudi Arabia has agreed that Iraq’s Prime Minister Adil Abdul-Mahdi help set the stage for a meeting with Iran.

“The Saudis have given the green light in this matter, and Mr. Abdul-Mahdi is working on it,” Abbas al-Hasnawi, an official in the Iraqi premier’s office, told the Middle East Eye (MEE) news portal on Tuesday.

He also noted that the Iraqi prime minister had been mediating between Riyadh and Tehran in a bid to ease tensions in the region, and that he had communicated the conditions of both sides for negotiations.

“The Iraqi leadership has channels with both sides. Our Sunni brothers [in the government] liaise with the Saudis and our Shia brothers with the Iranians,” Hasnawi said.

“The Saudis have conditions before the negotiations process starts and the same with Iranians. We have liaised these conditions to each side. It is not an easy task to get together two opposite sides in terms of their ideology, sect and their alliances in the region,” he added.

The official further said that Abdul-Mahdi was hoping to host a meeting between Saudi Arabia and Iran in Baghdad under the supervision of the Iraqi government, stressing, however, that a location had yet to be agreed.

“Baghdad is the best place for this meeting, but I can’t confirm it will be. In the beginning, there will be meetings between officials of both countries, and then a deal will be made. Leaders of Saudi Arabia and Iran will meet to sign it,” he said.

Last week, Abdul-Mahdi held talks with Saudi officials during a visit to Jeddah. After the trip, the Iraqi premier told Al Jazeera that Saudi Arabia was looking to de-escalate tensions with Iran.

Hasnawi further said the Americans “have no problem” with a potential deal in the region, adding that Iraq’s National Security Adviser Falih Alfayyadh is currently in Washington to discuss a timeline for a Saudi-Iran meeting.

He also confirmed that Saudi Arabia, including Crown Prince Mohammed bin Salman, had “calmed their rhetoric” in recent days, warning of the consequences of a new regional conflict.

“The region can’t withstand another conflict between Saudi Arabia and Iran, it is a hazardous region, and it is rich with crude oil, essential to the whole world,” he said.

The remarks came amid heightened tension between Iran and Saudi Arabia over the latter’s baseless accusations against Iran over the September 14 air raids on two Aramco installations, which were claimed by Yemen’s Houthi Ansarullah movement.

However, in an apparent break with his trademark bellicose rhetoric, bin Salman on Sunday called for a “peaceful” settlement with Tehran and warned that a war with Iran would lead to a “total collapse of the global economy.”

PressTV-MbS: Iran war will cause ‘collapse of global economy’

Saudi Arabia’s Crown Prince Mohammad bin Salman (MbS) has warned that war with Iran will entail a “total collapse of the global economy”.

“We welcome Mohammed bin Salman being quoted as saying he wants to resolve issues through talks with Tehran,” Larijani said.

Iranian government spokesman Ali Rabiei confirmed on Monday that Saudi leaders had been sending messages to Iran’s president through a head of state.

However, Adel al-Jubeir, the kingdom’s minister of state for foreign affairs, said Wednesday that Rabiei’s remarks were “not accurate.”

“What happened was that sister countries sought to calm the situation, and we told them that the position of the kingdom was to always seek security and stability in the region,” he added.