Lindsey Graham sure acts like a sexually blackmailed Israeli agent.

To understand this we need to unpack the Jeffrey Epstein scandal. Ghislaine (whose name means “filth” in Arabic) Maxwell, daughter of Mossad superspy Robert Maxwell, was Epstein’s Mossad handler…or one of them. Ehud Barak was another. Epstein’s job was to pimp young girls to powerful people and get compromising photos and videos, which Israel uses to control the United States. Despite Epstein’s “suicide” there are still plenty of Epstein-types out there, many pushing underage males as well as females.

Lindsey Graham is a fanatical pro-Israel neocon and a reputed homosexual. And the fact that he is sexually blackmailed is an open secret in Washington. MSNBC anchor Stephanie Ruhle once said it on national television. And Jon Cooper, chairman of the Democratic Coalition super PAC, accused Graham of letting himself be blackmailed for “some pretty serious kink.”

After Trump was elected, Israel seems to have ordered never-Trumper Graham to reverse himself and befriend Trump. Like Jared Kushner, Graham appears to have been appointed as one of Trump’s Israel-friendly handlers.

Given Trump’s popularity with evangelicals, it may seem odd that his favorite golf buddy is a flaming, barely-closeted homosexual senator from South Carolina. Trump has implied that unlike Obama he doesn’t feel comfortable around Muslims. But he obviously feels very comfortable with arch-homosexual and likely blackmailed pedophile Lindsey Graham. Maybe that’s because Trump himself is more than familiar with that world. Trump got his start as Roy Cohn’s boy toy, and is still very close to a certain 9/11-perp pervert named Rudy Giuliani.

Is Trump’s image as an irrepressible pussy-groper a facade hiding his membership in the gay criminal underworld explored in Oliver Stone’s film JFK?

And is the current impeachment push designed to either pressure Trump to reverse course and wage war on Iran…or replace Trump in 2020 with a more pliable neocon-Zionist puppet like Ted Cruz or Marco Rubio? 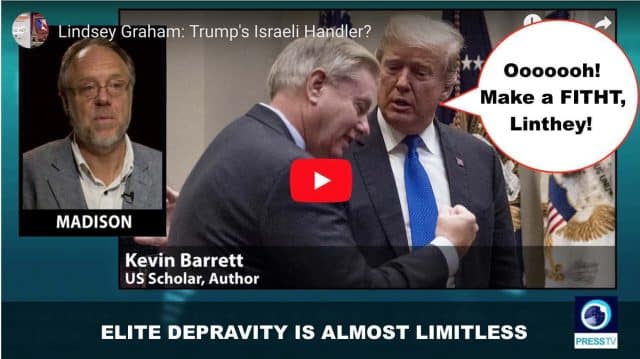 Kevin Barrett, an author, journalist and radio host with a Ph.D. in Islamic and Arabic Studies, made the remarks in an interview with Press TV on Sunday.

“Why is Lindsey Graham defending Donald Trump against impeachment? To understand this, we have to look at the background,” Barrett said.

“Lindsey Graham is a fanatical pro-Israel new conservative,” whose “job is to push the Israeli agenda in the US government,” he added.

“Israel ordered Lindsey Graham to befriend Trump as soon as Trump was elected and since then Lindsey Graham has been one of Trump’s Israeli handlers along with Jared Kushner,” Trump’s son-in-law and advisor.

On September 24, House Speaker Nancy Pelosi announced the launch of a formal impeachment inquiry into the president.

Pelosi made the announcement after meetings with Democratic congressional leaders and working out plans to move toward impeachment proceedings against Trump over his July 25 phone call with Ukrainian President Volodymyr Zelenskyy.

“The actions of the Trump presidency revealed the dishonorable fact of the president’s betrayal of his oath of office, betrayal of our national security, and betrayal of the integrity of our elections,” Pelosi said in a televised address.

“Therefore, today I’m announcing the House of Representatives is moving forward with an official impeachment inquiry,” Pelosi added. “The president must be held accountable; no one is above the law.”

Trump reportedly urged Zelensky about eight times during the phone call to work with his lawyer Rudy Giuliani to investigate government corruption involving Biden and his son, Hunter.