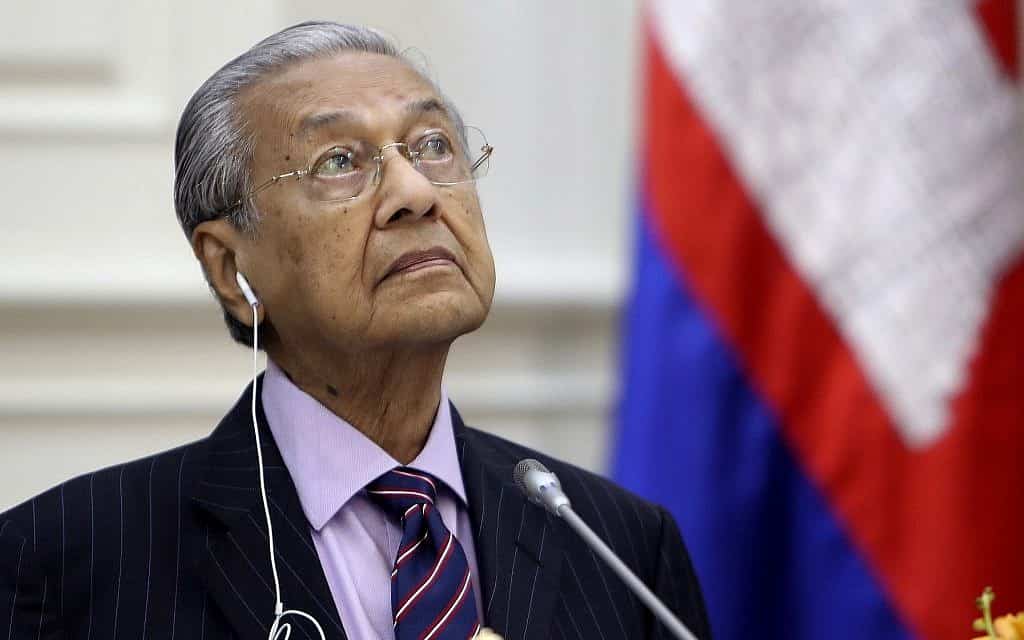 
Malaysian Prime Minister Mahathir Mohamad has recently created a firestorm of controversy when he was invited at a conference at Columbia University. Jewish groups from across the country went berserk, going so far as to condemn the university for inviting a vicious anti-Semite at the school.

How is it possible, they reason, that an Ivy League school would take the initiative to even entertain a man who has been saying that the Khazarian Bankers Cult rules “the world by proxy”? That’s unthinkable! That’s outrageous! The university must be punished!

In any event, Mohamad was asked by a student about his past views during a question-and-answer session, and he definitely did not succumb to pressure. When the student asked him about the Holocaust, he responded: “I am exercising my right to free speech. Why is it that I can’t say something against the Jews, when a lot of people say nasty things about me, about Malaysia? I didn’t protest, I didn’t demonstrate.”[1]

That’s an interesting point. Why should the Khazarian Mafia to stop any activity when someone says something they do not like? Are they implicitly asking the entire world to make a special rule for them only? Do they mean to tell us that they don’t care about other people’s feelings as well? If they do, then what’s the fuss? If they are whining and moaning about what Mohamad said, how about calling people beasts and cockroaches and even donkeys? Don’t they know that Israeli prime ministers and officials have been calling Palestinians those names for decades? Did the Khazarian Bankster Cult know a rabbi by the name of Ovadiah Yosef?

Back in 2010, Yosef declared: “Why are Gentiles needed? They will work, they will plow, they will reap. We will sit like an effendi and eat. That is why Gentiles were created.”[2] Yosef continued:

“In Israel, death has no dominion over them… With gentiles, it will be like any person – they need to die, but [God] will give them longevity. Why? Imagine that one’s donkey would die, they’d lose their money. This is his servant… That’s why he gets a long life, to work well for this Jew. Gentiles were born only to serve us. Without that, they have no place in the world – only to serve the People of Israel.”[3]

Yosef also said of Arabs: “How can you make peace with a snake? Those evildoers, the Arabs — it says in the Gemara [Talmud] that God is sorry he ever created those sons of Ishmael.”[4]

Of course, Benjamin Netanyahu quickly distanced himself from Yosef when he uttered those wonderful words. He issued a statement saying that Yosef’s sermons “do not reflect my approach or the stand of the Israeli government.” So far, so good.

But when Yosef died in 2013, Netanyahu declared: “The Jewish People have lost one of the wisest men of his generation.”[5] One of the wisest men? Well, according to this logic, Yosef taught the Jewish people, including Benjamin Netanyahu, that the Goyim are donkeys. How else would the Israeli government, under Netanyahu’s watch, continue to slaughter, maim, and mercilessly exterminate the Palestinians?[6] How else would they continue to expand the settlement?[7]

And don’t forget what Israeli politician and Minister of Justice Ayelet Shaked. “Who is the enemy?,” she asked. “The Palestinian people. Why? Ask them, they started…” Shaked’s political ideology with respect to the Palestinians is worth quoting in full:

“The Palestinian people has declared war on us, and we must respond with war. Not an operation, not a slow-moving one, not low-intensity, not controlled escalation, no destruction of terror infrastructure, no targeted killings. Enough with the oblique references. This is a war. Words have meanings. This is a war.

“They are all enemy combatants, and their blood shall be on all their heads. Now this also includes the mothers of the martyrs, who send them to hell with flowers and kisses. They should follow their sons, nothing would be more just. They should go, as should the physical homes in which they raised the snakes. Otherwise, more little snakes will be raised there.”[8]

Shaked declares that she intends to “promote advanced processes of democratization in Israel,” but how does that line up with the idea that all Palestinians are the enemy? Does Shaked really think that democracy can even exist without what Kant would call the categorical imperative or practical reason? Can Israel’s laws with respect to the Palestinians be really universalized?

And if you think this is far-fetched, perhaps we need to bring in Rabbi Yitzhak Ginsburg, who said unequivocally: “Any trial based on the assumption that Jews and goyim are equal is a total travesty of justice.”[4] Long before Netanyahu came on the political scene, Prime Minister Yitzhak Shamir compared the Palestinians to “grasshoppers.”[9] Former IDF Chief of Staff Raphael Eitan declared way back in the 1980s:

What we are saying here is that Mohamad has a point when he declared that the Khazarian Mafia and their lackeys have to explain to him why they don’t see the contradiction.