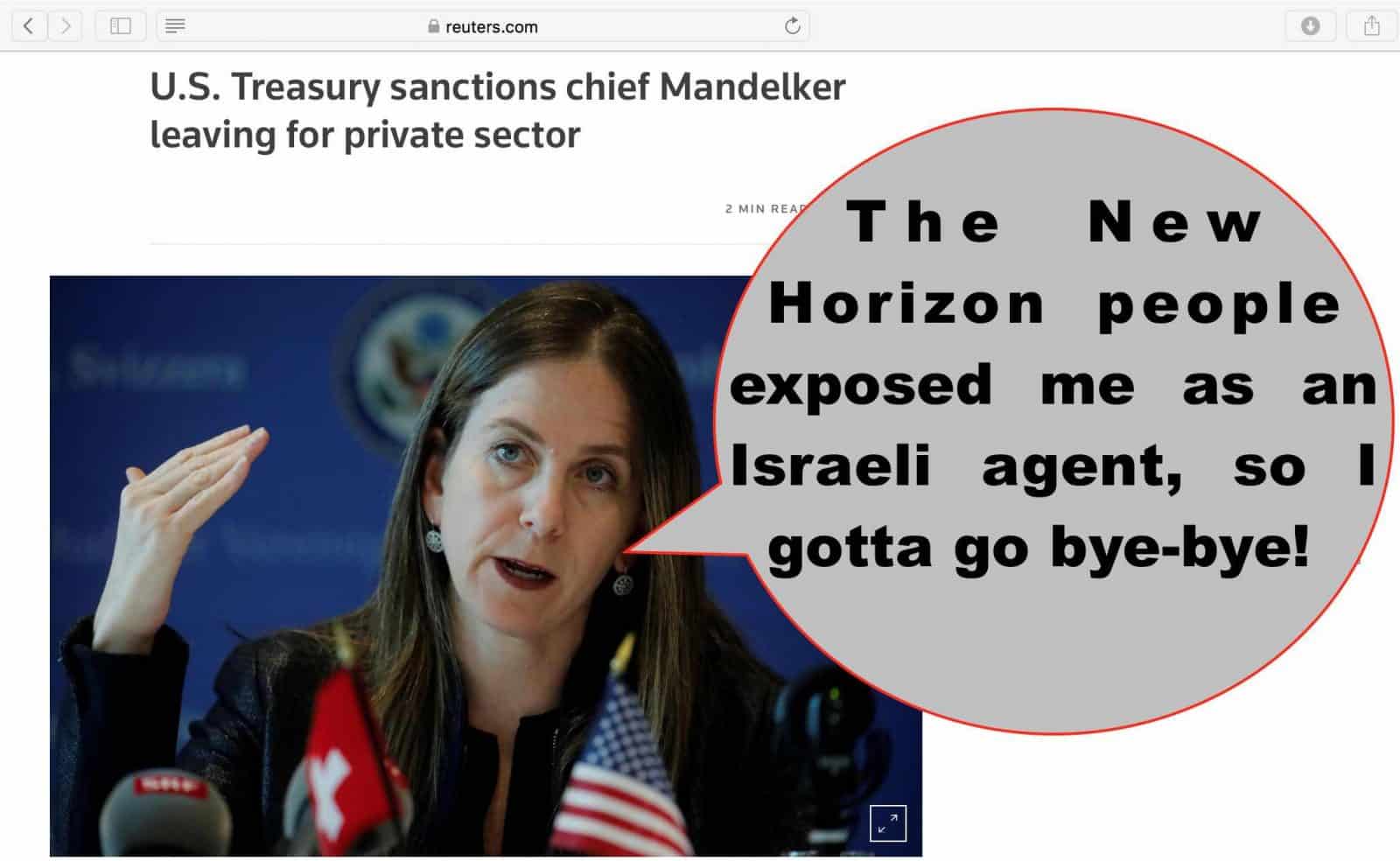 When the FBI called me up to request an in-person interview—and to warn me I would be arrested if I attended a scholarly conference in Beirut—I told them the person they should be investigating was Sigal Mandelker, the suspected Israeli agent running the US Treasury Department’s sanctions program. Israeli-born dual citizen Mandelker was using her perch at Treasury to persecute loyal, patriotic Americans and deprive them of their rights of free speech and free association. Specifically, she had engineered a witch hunt against Iran-based NGO New Horizon, leading to that organization being spuriously designated as a sanctioned entity, and preventing Americans like me from attending annual New Horizon conferences, including the one held last weekend in Beirut.

Did honest FBI agents take our advice? Did the Bureau, tasked with persecuting Mandelker/Israel’s political enemies, start asking too many good questions? Did Mandelker’s perch at Treasury become a proverbial hot seat?

One way or another, it seems that having a born-in-Israel Zionist fanatic running the US sanctions program became a political liability. Yesterday Mandelker “offered her resignation.”

Mandelker (and the Israeli spy network that arranged for her appointment in the first place) should have been arrested, not just fired. But that major housecleaning operation will have to wait till another day.

For more information on the Mandelker-vs.-New-Horizon scandal, read these articles:

FBI Harasses US Citizens for Friendship with Iran by Sander Hicks

A few weeks ago I requested that the ACLU file a constitutional challenge to the Treasury Department sanctions on New Horizon. So far they have been unresponsive. Below is my letter.

I have been directly and indirectly threatened with arrest and seizure of assets without due process by the United States Department of the Treasury if I were to participate in a conference of scholars, authors, and journalists. Due to these threats I was forced to abandon plans to attend the 7th Annual New Horizon Conference in Beirut, Lebanon. https://www.presstv.com/Detail/2019/09/23/606930/New-Horizon-Conference-Beirut-Nader-Talebzadeh  As a Ph.D. Islamic Studies scholar, author, and journalist, I believe I enjoy rights of free speech, free association, and freedom of travel, and that sanctions imposed by the Treasury Department’s Under Secretary for Terrorism and Financial Intelligence violate these rights. Specifically my complaint is against Under Secretary for Terrorism and Financial Intelligence head Sigal P. Mandelker, the US Office of Financial Sanctions Regulations (OFAC), and the FBI, which is charged with enforcing Treasury Department sanctions.

On August 7 2019 FBI Special Agent Matthew Bazala (***@fbi.gov) called me from the FBI’s Madison office to request an in-person interview concerning the then-upcoming New Horizon Conference in Beirut, and the US Treasury Department sanctions against New Horizon. I told him I would consent to be interviewed on two conditions: The interview must happen at a public place like the Crossroads Café in Cross Plains (halfway  between his office and my house), and I must be allowed to make an audio recording of the interview. He said he would check with his supervisor and call me back.  When he called back, Agent Bazala said his supervisor had informed him that FBI policy banned audio recordings of interviews. I explained that I couldn’t consent to an interview without recording it due to concerns about the possibility of being misrepresented, but that I would be happy to answer his questions by email. He indicated that an email interview wouldn’t work for him.

During our conversation Agent Bazala warned me against attending the then-upcoming New Horizon Conference in Beirut. I said I had already received many indirect warnings passed on by other prospective attendees, some of whom had gotten surprise visits from the FBI and had been told that they if they attended the conference they would be arrested at the airport upon return from Beirut. I said I understood the government’s position was that the Treasury Department sanctions effectively banned me from attending the conference, under penalty of law, and that therefore I would comply with the law, even though I believed it was unconstitutional.

I think the Tehran-based New Horizon NGO has been targeted because its conferences are viewed as an ideological threat to powerful special interests here in the US. Mainstream Iranian intellectuals like New Horizon organizer and filmmaker Nader Talebzadeh, the most popular TV host in Iran, hold views of the US empire, Israel, and related issues that are very different from the views allowed expression in mainstream American media and politics. Yet a great many well-informed people, globally and here in the US, largely agree with some or most aspects of the mainstream Iranian view, and disagree with the mainstream American one. The New Horizon conferences have been a platform where many of the world’s most formidable dissident intellectuals can meet in person, get to know each other, and find ways to promote their interpretations of world events.

I have been participating in these annual conferences since 2013, and helped arrange for the participation of various Americans including former Senator Mike Gravel. It seems to me that this kind of intellectual exchange between Americans, Iranians, and global dissident intellectuals has many positive effects, including building American-Iranian friendships. I understand from conversations with former high-level USG insiders that under the Obama Administration the New Horizon conferences and similar events were viewed more positively, but that the Trump Administration’s hostility to Iran has led to a reversal of that policy. I think banning American intellectuals from these conferences, with no due process, is a grossly unconstitutional overreach that needs to be challenged in court.

I request that the ACLU file a constitutional challenge to the Treasury Department sanctions on New Horizon, specifically the ban on US citizens’ participation in New Horizon sponsored conferences.