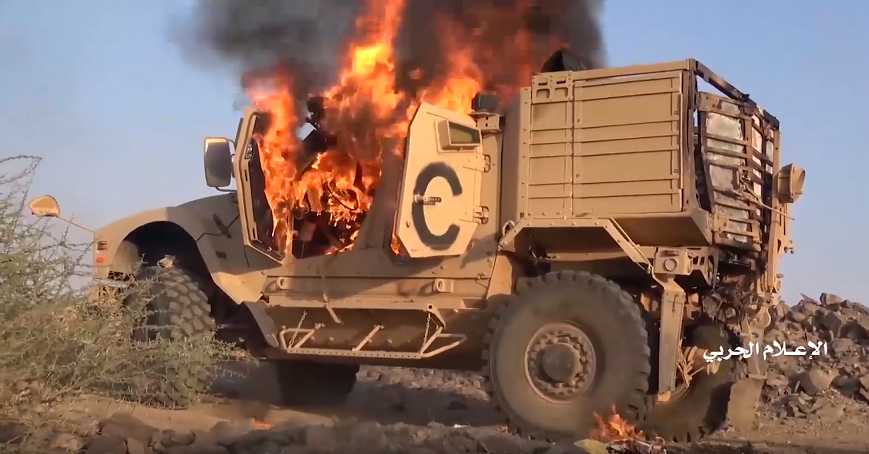 [ Editor’s Note: Usually PoWs are not put on display like this, but because Yemen is enduring a genocidal war by the Saudis and its Western supporters, the Yemen government does not see why it should have to obey Western rules that the West doesn’t obey.

I could foresee this happening after the Saudi armor regiment abandoned the three brigades of Yemeni mercenaries to their fate at the hands of the Houthis, where their routing and capturing the entire force was a decisive victory.

Not only have we had no reports of extra-judicial killings (although I doubt the Houthis would show us any such videos if they existed), but we have seen the good treatment, so far, of the PoWs.

I suspect that many of these prisoners are going to end up inside the Houthi forces in a strange twist of events. And with luck, the war might be coming to an end.

Saudi strong-arm Crown Prince bin Salman (MbS) has found himself in a foreign and domestic political mess with a stressed economy, where even the attempts at raising money with a 1% public offering or Aramco stock is getting an indifferent response from investors.

Just yesterday, we had the report of the Saudi Royal family whispering a lack of confidence in the young prince’s leadership, reaching for too much, too fast. He has recognized this publicly by beginning arrangements to meet with Iran to defuse hostilities there, a huge shift in the geopolitical tide in the Gulf.

The stories of MbS’ repressive regime are peaking now due to the major Frontline documentary, a devastating story of a power-mad Arab tyrant who instituted a total surveillance regime over his countrymen to crush all dissent. This even included the torturing of female Saudi “right to drive” activists.

None of this seemed to bother the Trump NeoCons, who present themselves as protectors of freedom and democracy. Hopefully, we are seeing a turn of events to end the suffering of millions of innocents at the hands of the international gangsters. It is better late then never, but it cannot bring back the dead… Jim W. Dean ]

The captives identified themselves as:

In the interviews, the captives described how they were captured by Houthi fighters and reassured their families and commanders that they are being treated well by the Yemeni group. Some of them appeared to be lightly injured.

“A message to our governors, to King Salman bin Abdul Aziz, the guardian of Mohammed bin Salman; We did not see from our Yemeni brothers, but all the best,” Ibrahim Rashid Ali al-Marri said in the end of his interview.

More than 2,000 personnel of the Saudi-led coalition, including dozens of Saudi soldiers, were reportedly captured in the large-scale operation. The Houthis captured large areas in the southern Saudi province of Najran in the course of the operation, which took place between August and September.

The Houthis said that they will not identify all the Saudi personnel captured in the course of the operation in order to gain leverage in future prisoners exchange deals. Some of the missing Saudi service members are in fact dead and their bodies are being held by the Yemeni group.